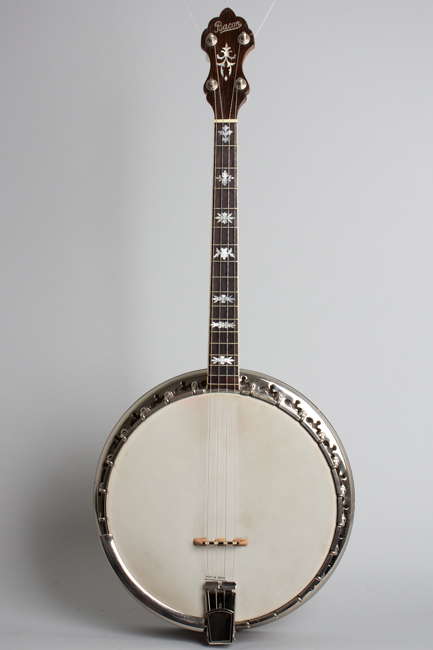 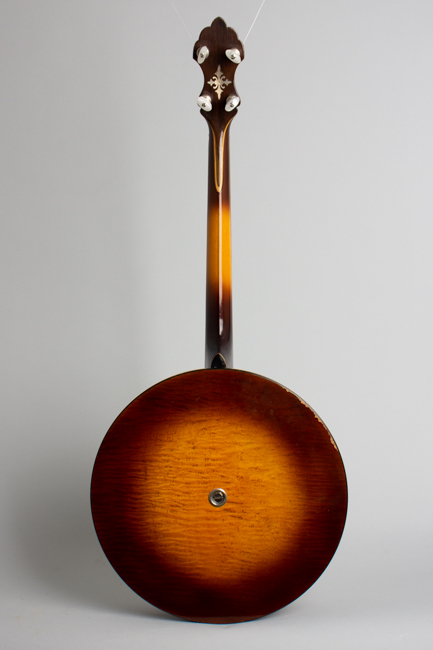 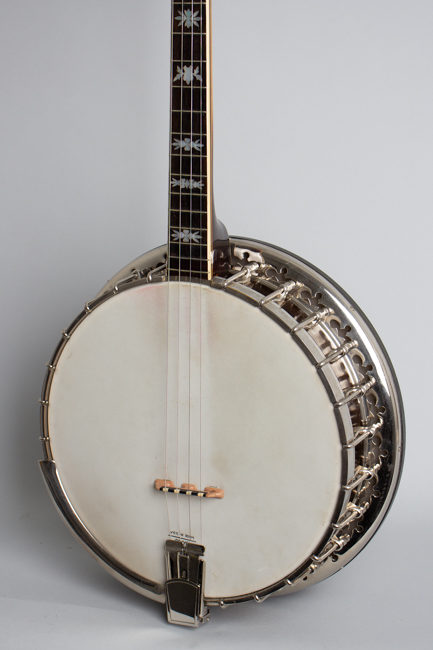 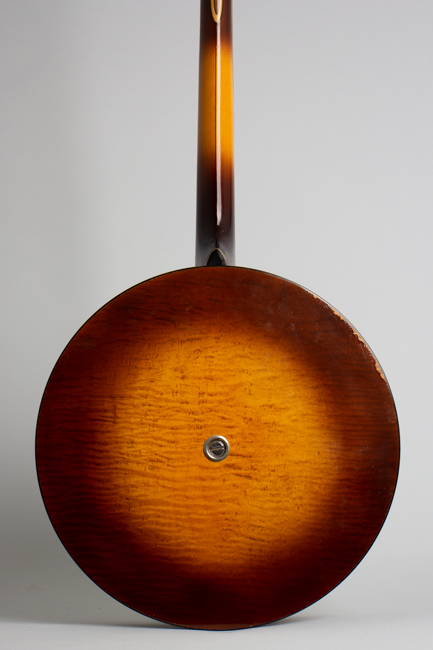 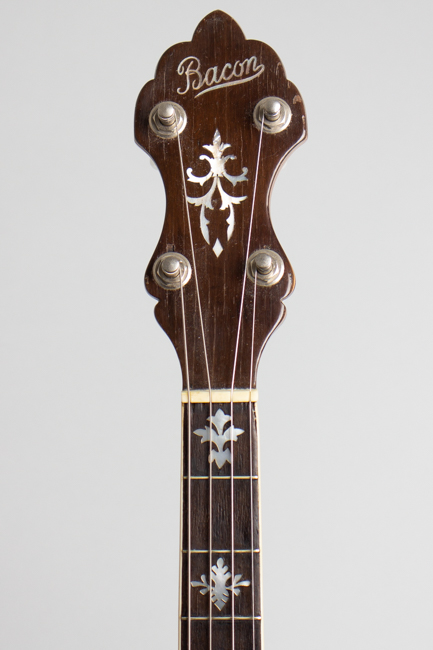 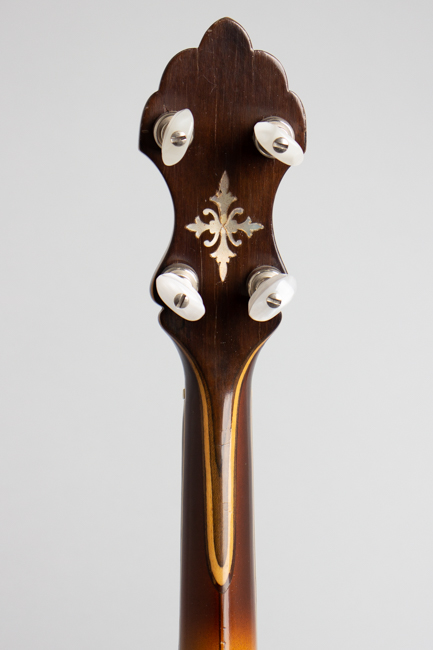 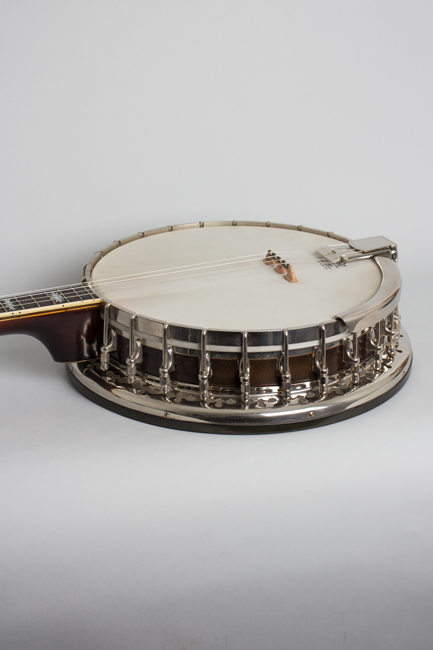 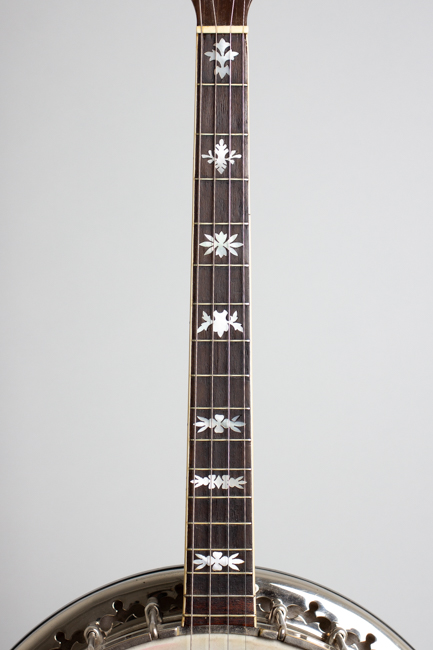 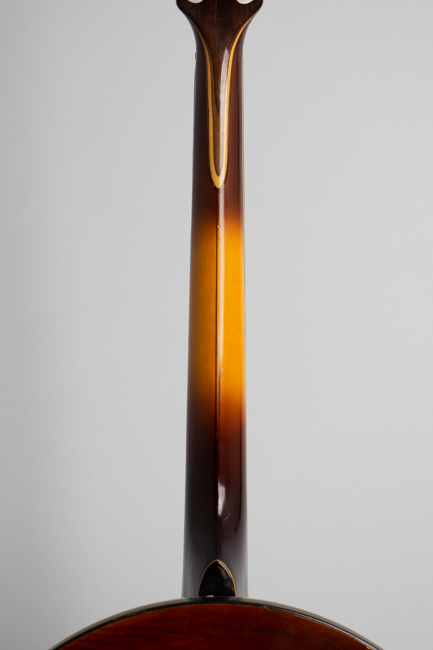 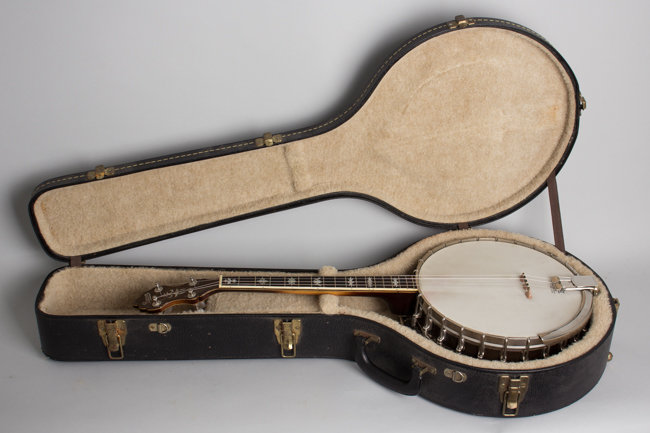 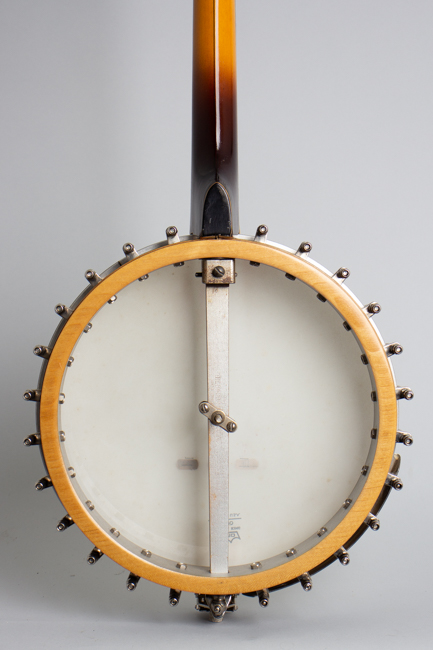 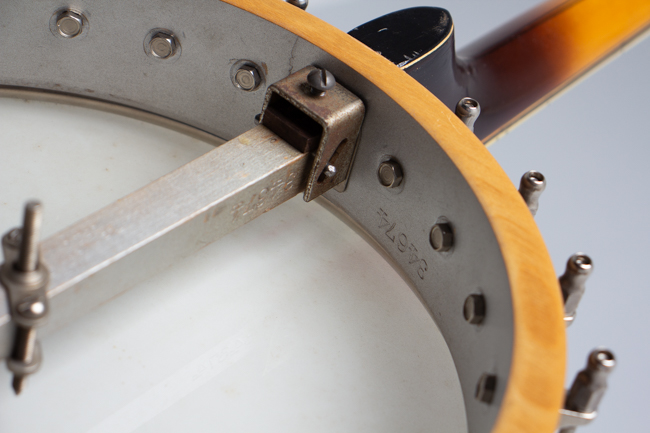 This Bacon-branded banjo is a bit of an oddity, almost certainly what collectors like to call a "floor-sweep" model. This refers to the apparent combination of parts from different models or eras that a company's workers would assemble into non-standard instruments just to clear them out of inventory. This practice is often seen with Gibson banjos of the later 1930's, as demand for these instruments was greatly reduced by later in the decade. This unusual short-neck tenor banjo was either a custom order or something assembled to "clear the racks" at Bacon's Connecticut factory at a time when banjo sales were dismal.

By the later 1930s the Bacon Banjo Company was already slipping into history; damage from the hurricane of 1938 pretty much closed the factory down and a year or so later the entire company was sold to Gretsch in New York. This little tenor bears a serial number from 1935, a time when Bacon was attempting to shift to guitar sales, with somewhat limited success.

It is NOT a typical 1930s 19-fret Silver Bell variant, and bears an old 1920s Bacon logo instead of the later "B&D" marque. The neck actually appears to be leftover stock from 1924 or earlier, with a short 17-fret, 20" scale fingerboard generally considered obsolete by the late '20s. It is a fairly deluxe piece with multiple laminations down the spine, under the fingerboard and on the headstock face and back. The bound, ebonized maple fingerboard has fancy shaped pearl inlay, as does the headstock.

The rim is a typical mid-line 1930s "Special" style, with the simpler sheathed tone ring and lower-mounted Silverbell style flange. The resonator mounts with a simple center bolt. The rim and dowel stick are stamped with matching 1935-period serial numbers, so this is definitely a factory assembled instrument. The hardware is original and typical of that period as well, with the exception of later replaced Planet tuners.

Whatever its origin story this is a neat little banjo, an unusual combination of the old short neck and "modern" resonator that is very hard to find. It makes a nice small-combo jazz band or ragtime instrument, and would be an especially fine Irish-style banjo if so strung. We have never seen another Bacon with this combination of features, and may well never see another!

This banjo shows some signs of use over the last 85 years or so but is in generally excellent condition and ready to twang on for many more. The finish is well preserved overall, with some light checking and small dings and dents. There is chipping on the rim around some of the shoes and around the edge of the resonator back which also shows some scratches and scuffs.

All hardware appears original except the tuners, which are fairly recent Planetary style and a replaced nut. The plating overall shows just some fairly light wear and is well-preserved for an instrument of this age. The neck has had the last two frets and the lower tip of the fingerboard replaced, probably due to chipping. Not the neatest job, but not too conspicuous. The rest of the original small 1920s style frets show only minor wear. This is a fine sounding and playing banjo, if an eccentric one set up "modern style" with a plastic head and recent ebony/bone capped maple bridge. It includes a more recent HSC, probably from the 1970s. Overall Excellent Condition.
×