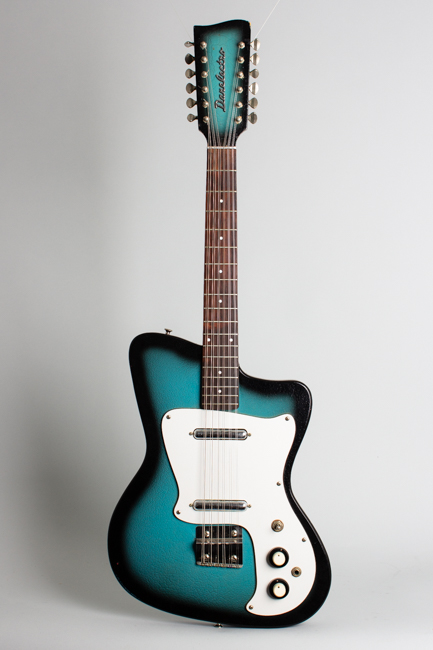 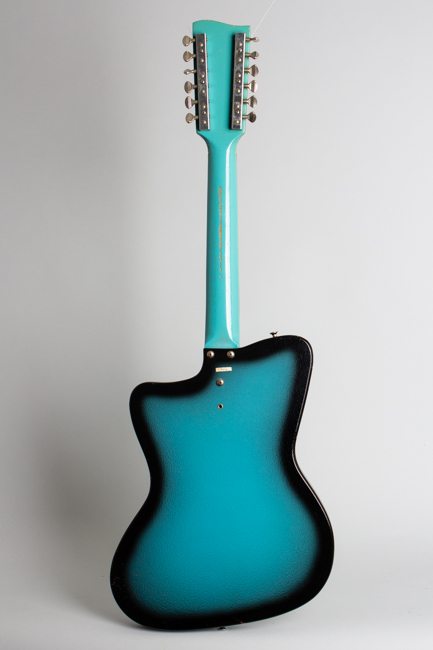 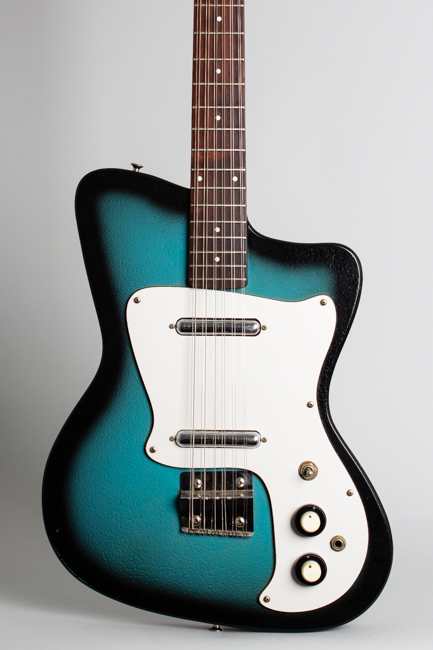 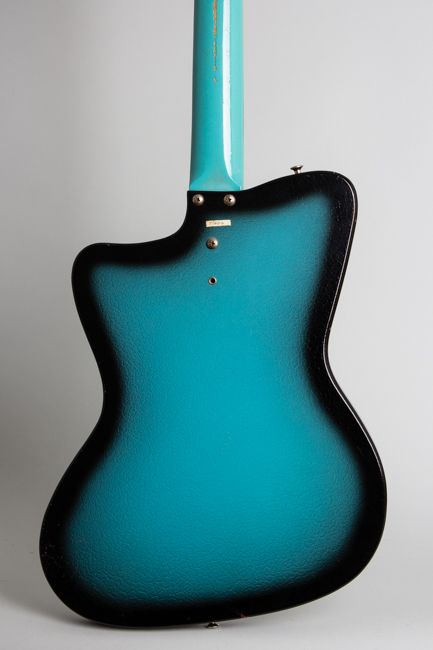 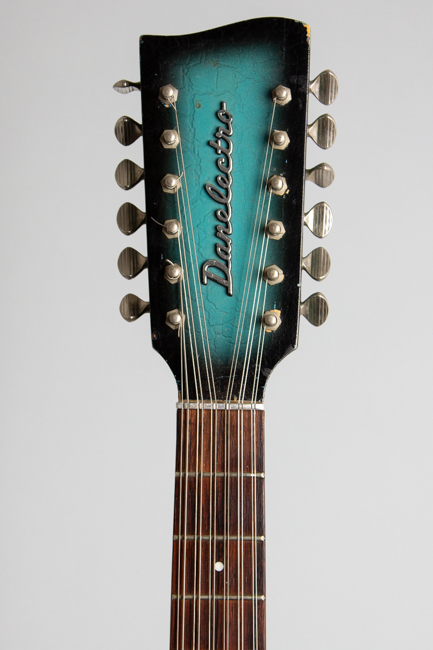 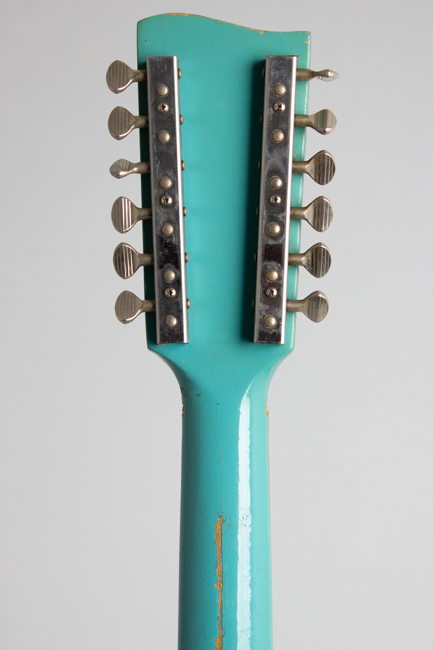 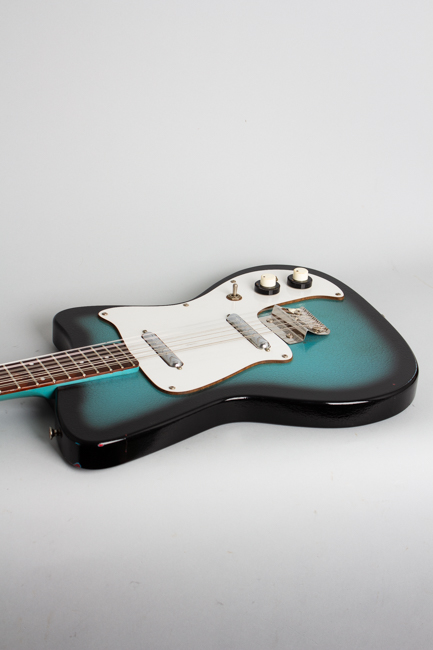 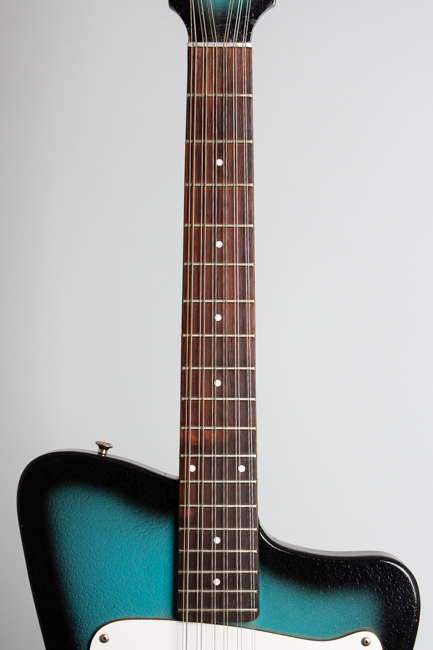 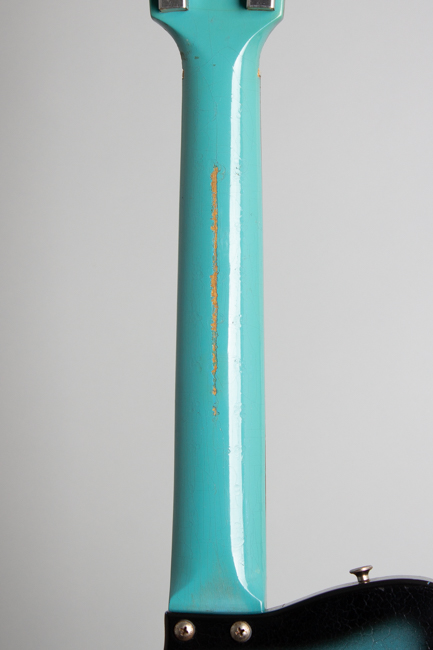 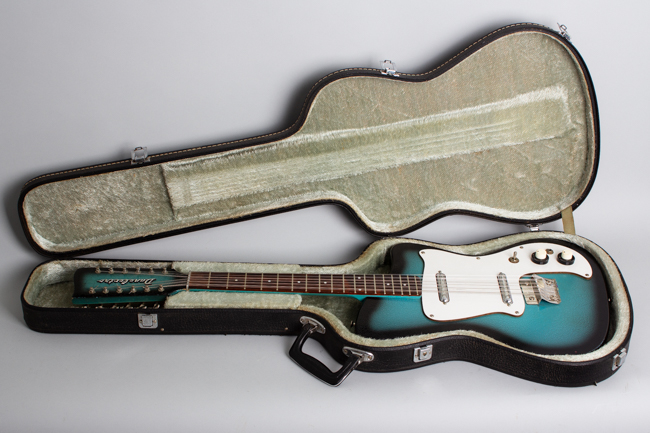 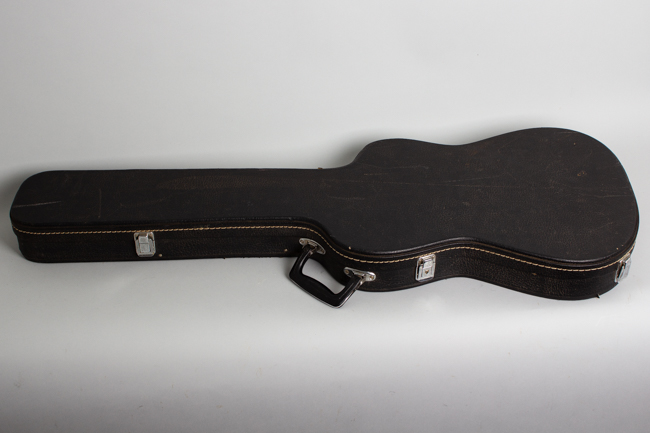 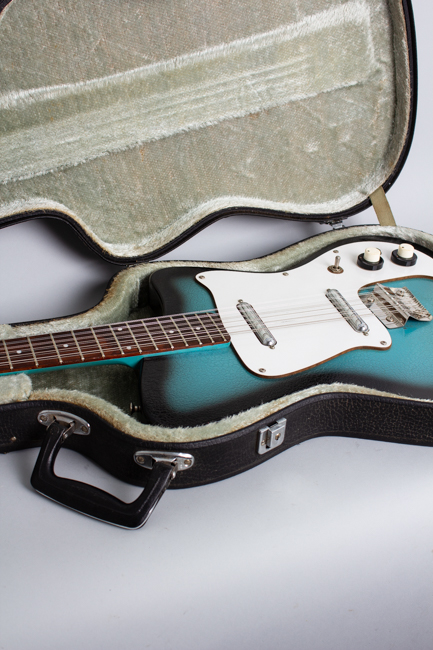 In the last days of Danelectro (after the company was purchased by entertainment conglomerate MCA) several entirely new series of guitars were offered for a fairly brief period during 1967 and '68. The Hawk series used a solid looking (but actually slightly semi-solid) body built from the company's traditional Masonite and pine in a boxy asymmetrical shape, with a short-scale neck and new stamped metal one-piece bridge. These were all made in very small numbers compared to earlier Dannos and are quite rare today.

These were bargain-priced instruments, especially compared to the company's new Coral-branded line. This Model 2N-12 was the most expensive of the lot and cost $89.98 new, plus case. This was quite a bargain in a two-pickup electric 12 string, even for Danelectro. "No greater value in popular priced electric guitars" claimed Danelectro, not without cause!

The main attraction on this example is probably the rare shaded blue-to-black sunburst finish, which is not pictured in the catalog but similar two-tone jobs have turned up on some example. The classic Danno pickups are controlled by a 3-way switch and concentric pots, offering a lot of tone for the price.

While definitely a budget guitar overall this is still a snazzy little machine, mostly remembered (here in NYC at least) as the model long associated with avant-rocker and "Skronk" maven Arto Lindsay. While the almost comically simple bridge offers little in adjustability, this is a handy and good sounding little 12 string. While it's probably not going to replace anybody's beloved Rickenbacker 360-12, this is still a useful instrument. All these Hawk models are fairly rare, and this is a good playing and nicely original example of the "top' model in this line.

This guitar shows some light general wear but remains all original and relatively clean overall. The finish shows some minor chips and dings overall but the only notable damage to the lacquer is a deep scrape going right up the center on the back of the neck. Despite appearances this is NOT a crack, and the neck is completely solid. Playability is good for one of these, taking into account this is a 12-string with a non-intonatable stamped metal bridge. The top ridge of this piece has a number of slots for different string spacing options, which appear to be (mostly at least) factory. Overall a cool and colorful example of this interesting Danno rarity, with a good straight neck and two great sounding Danno pickups. And if it's "Skronk' you're after, this Hawk will deliver! Overall Excellent - Condition.
×