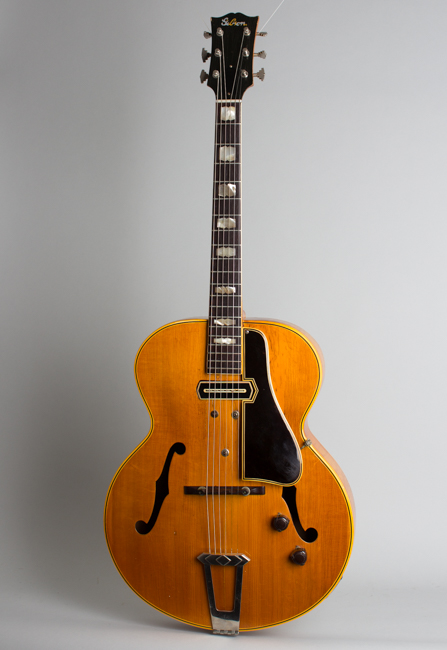 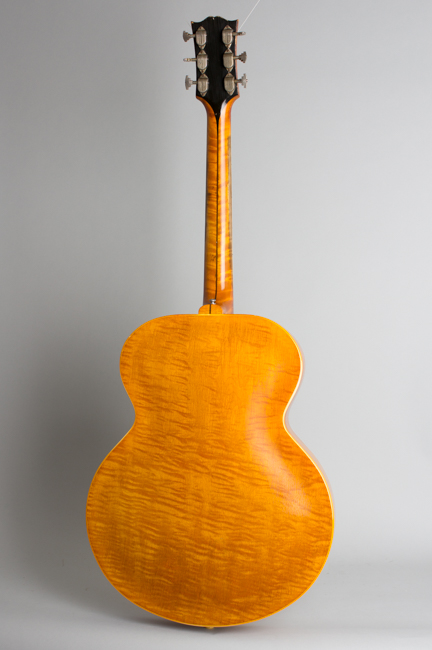 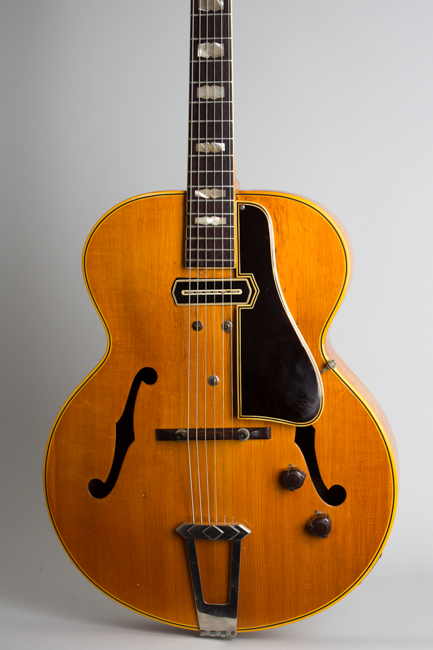 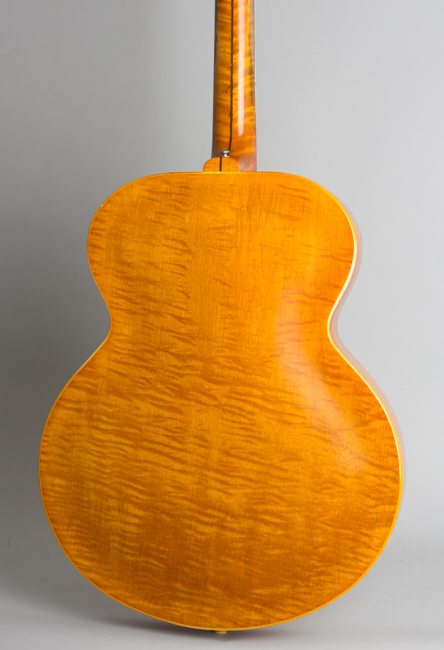 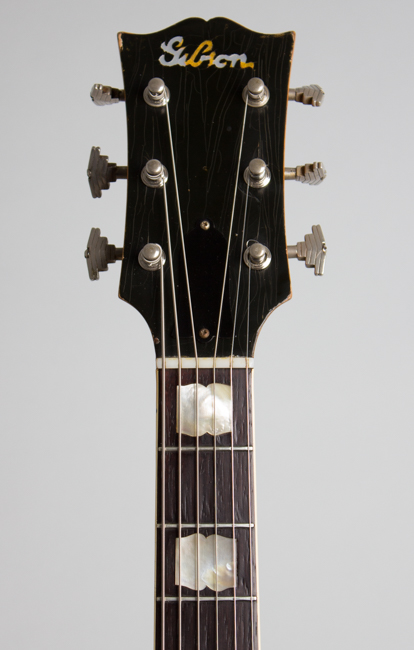 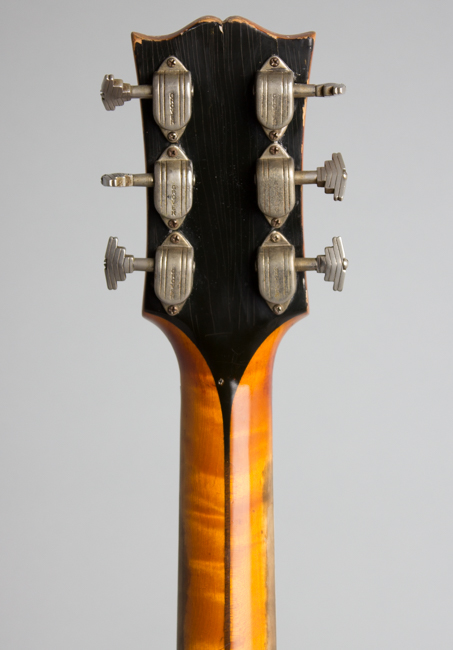 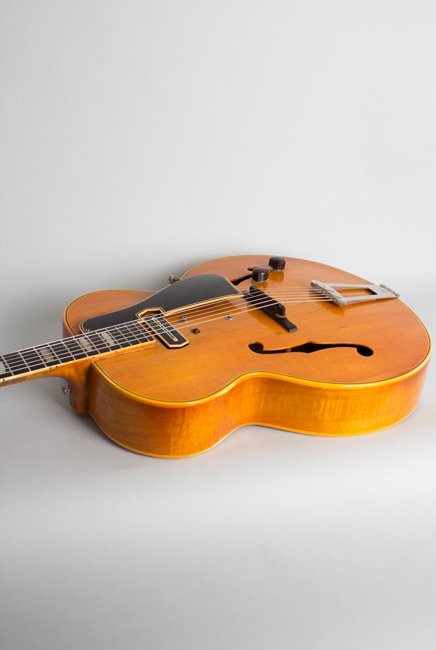 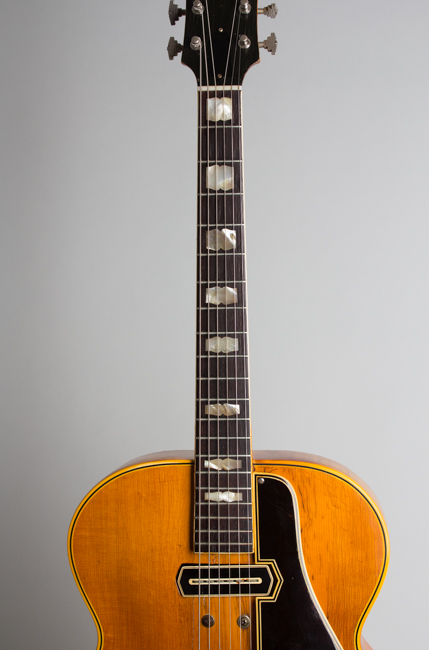 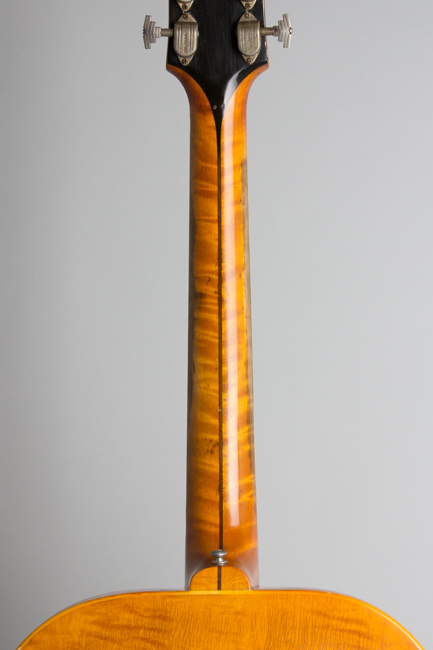 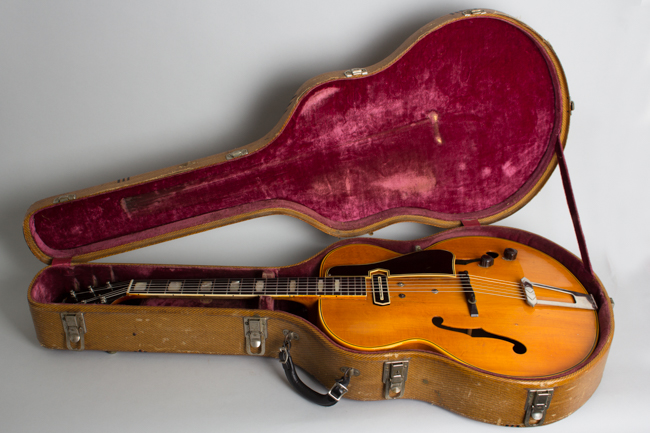 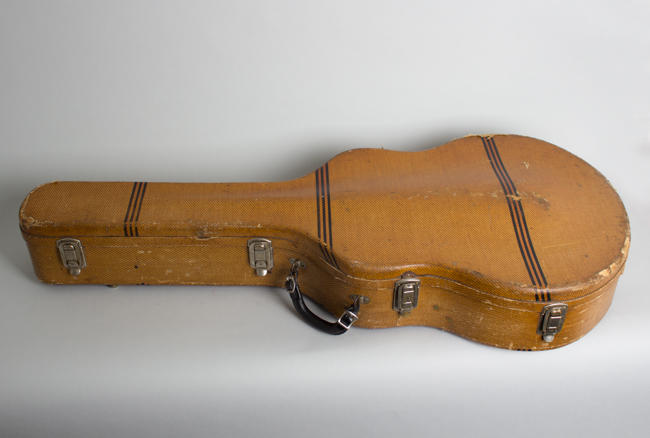 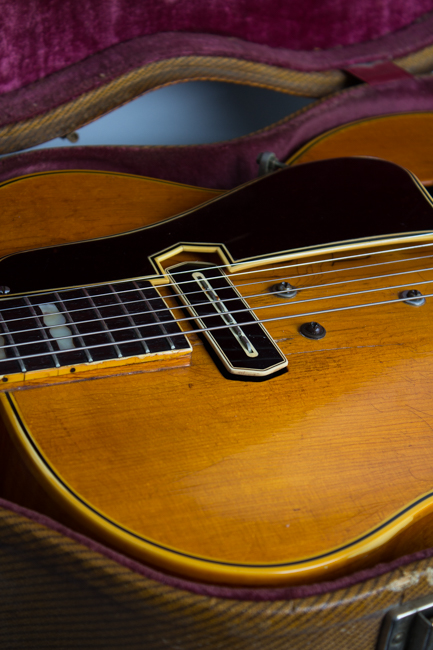 The pre-WWII Gibson ES-250 is quite simply one of the rarest and certainly the most sought-after of early archtop electric instruments. Beyond that remains an exceptional player's guitar 80+ years on, an absolutely classic design. Most associated with Charlie Christian (who played one as well as Gibson's earlier and plainer ES-150) this model was the first really deluxe Gibson electric Spanish guitar and an important step in the evolution of the company's electric line. While many early electric guitars from the 1930s have a rather mongrel look, the ES-250 has a beautiful Deco elegance that made it stand out on the formal bandstands of the time.

This particular guitar is a 1940 model with a natural finish overall, a new Gibson idea at the time. It is fitted with the final most refined version of the famous bar magnet "Charlie Christian" pickup featuring a triple-bound top edge and 6 individual blades under the strings. The spruce top is triple-bound, the back single bound and a pearl Gibson logo adorns the headstock. The pickguard is tortoise celluloid with the same wide triple binding as the body.

The top on this guitar is solid spruce, worked somewhat thinner than usually found on the smaller ES-150. There are two longitudinal braces under the top additionally supported by twin soundposts under the bridge ends, which are actually useful in helping suppress feedback as well. The back is laminated maple with a beautiful grain pattern. The tailpiece is the style used on the contemporary L-7, the adjustable rosewood bridge and radio-style knobs typical Gibson fittings for the time. The tuners are first generation Grover Imperials; most ES-250s mount Kluson sealfast tuners but there are no extra holes visible and is not original these appear to have been there virtually since new.

The ES-250 was made in very limited numbers in 1939-40 and Gibson seems to have changed the specs with virtually every batch. Only 70 ES-250s were shipped in total, 58 of those during 1940. The different versions of the model sometimes show overlapping features; this one has the second generation headstock shape without stair-stepped sides but the first-generation "open book" inlay on the bound fingerboard. The tailpiece is a second generation feature as well, while the plain "Gibson' logo headstock is a short-lived transitional feature. Fewer than 40 later-style ES-250s were built, and this is likely one of only a handful with this particular combination of features.

This guitar has seen some use, wear and repair but is an exceptionally rare and superbly classy instrument. Both Charlie Christian and T-Bone Walker adopted this model when new; since then it has proved so rare that even many veteran players and collectors have never seen, let alone played one. It was quickly replaced in Gibson's line with the ES-300 which discontinued use of the bar pickup, years before that unit itself became a sought-after legend. The ES-250 remains unique today, one of those Gibsons that missed the commercial brass ring when new but are virtual holy grails now.

This guitar has had some repair work in the past but remains a great-sounding, fine-playing example of this rare and much sought-after instrument. The finish has the slightly smokey look of a guitar that spent a lot of time on old bandstands, but no odors or sticky surfaces.

There is a very old clear overspray over most of the finish which appears nearly as old as the guitar. There is fairly heavy checking over most of the body, dings dents and scrapes but less finish wear overall than many of this model. The most notable is that the lacquer is worn down to the wood on the both sides of the maple neck. The overspray on the sides has checked the most heavily; it appears there may be a small splice crack repair in the upper side off the heel but it is difficult to tell for sure. The jack area has a large plastic plate added covering a typical repair to this often-damaged spot.

The area of the top around the pickup shows several sealed spruce grain cracks, with a small chip reglued in place just in front of the coil by the fingerboard. All have been closed effectively and lightly touched up, but the old work is not as neat as we might prefer today. The area under the pickguard has some staining from the outgassing celluloid of the original guard. All hardware appears original except for a quite old and very accurate repro pickguard and possibly the tuners, although as noted above they are period correct and appear to have been in place since the 1940s. A strap button has been added at the heel.

The frets are amazingly enough still original; they show some wear in the lower positions but the guitar still plays well. The fairly chunky round-backed neck is more similar in feel to a period L-7 or L-5 than the "V" profile neck found on the less deluxe ES-150, and is the mark of a professional Gibson in this period. This model was designed as Gibson's first prestige electric Spanish guitar; its had an unfortunately extremely short original lifespan but is now heralded as the finest of its era. This example has had some wear and repair but still looks, sounds and plays very nicely, and is accompanied by the original tweed HSC. Overall Very Good + Condition.
×