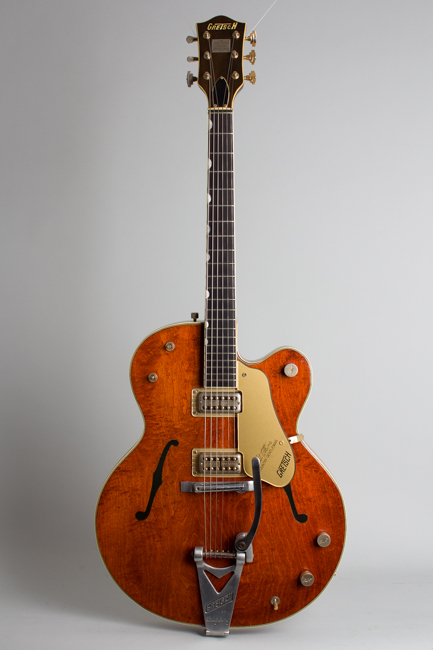 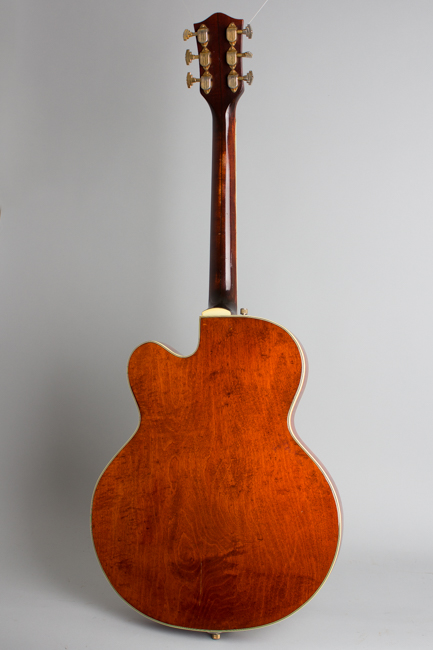 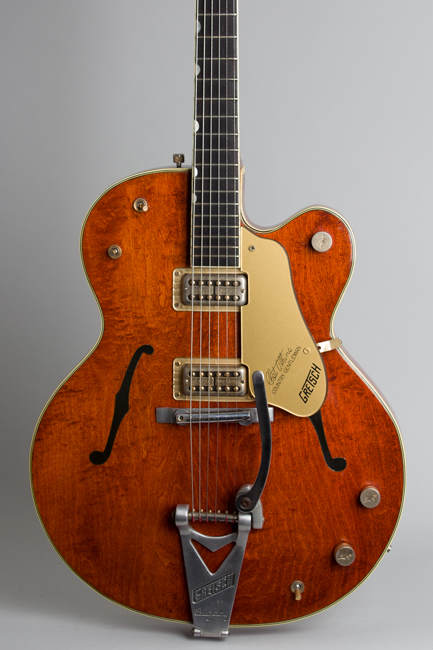 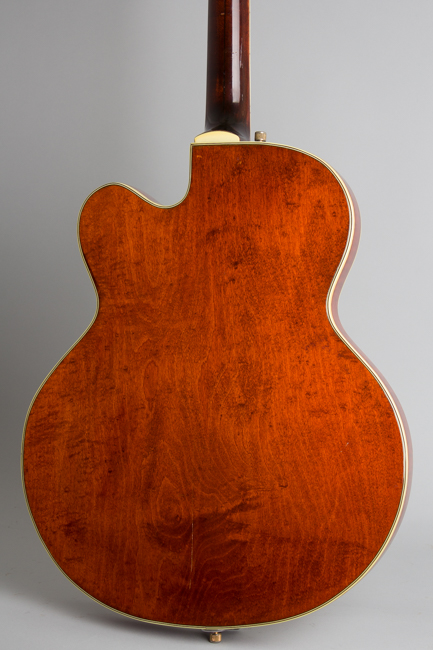 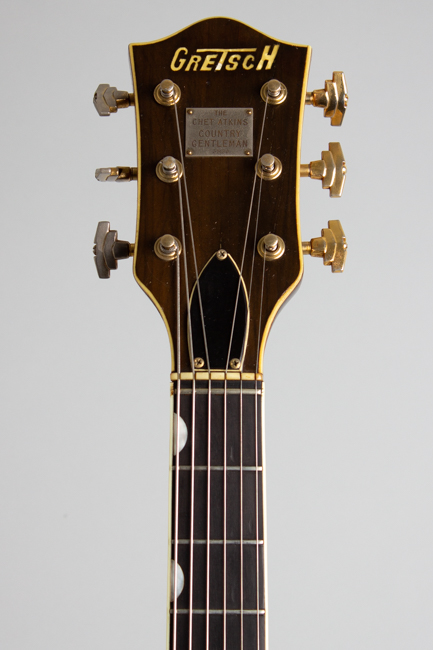 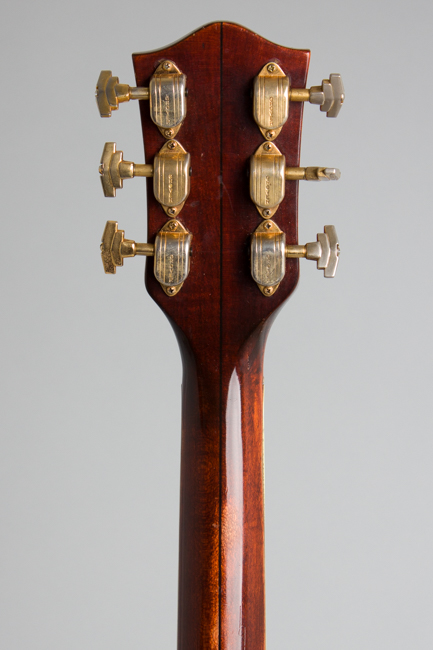 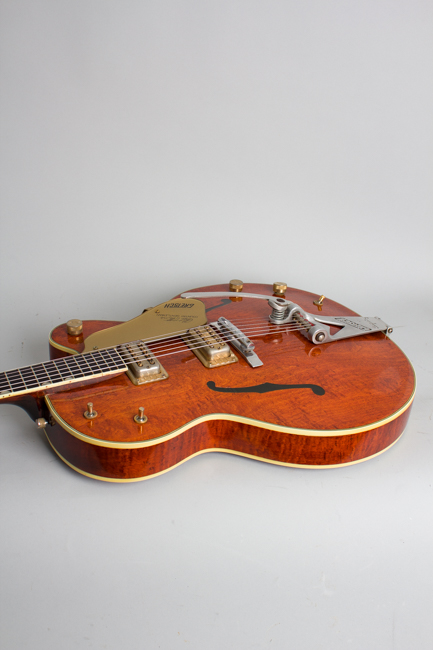 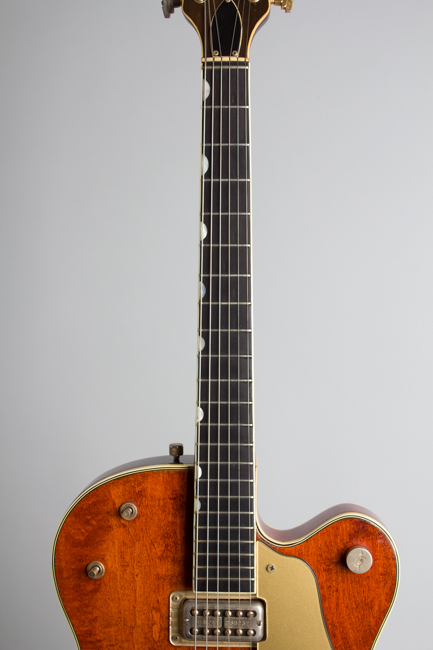 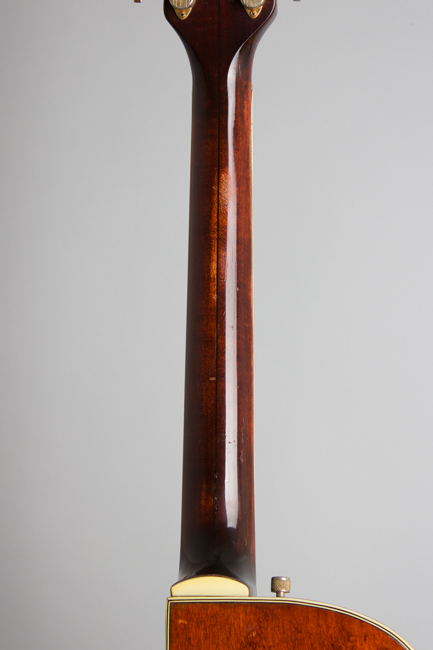 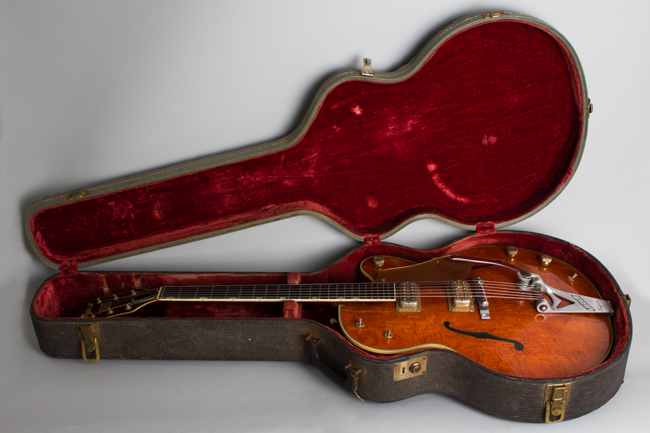 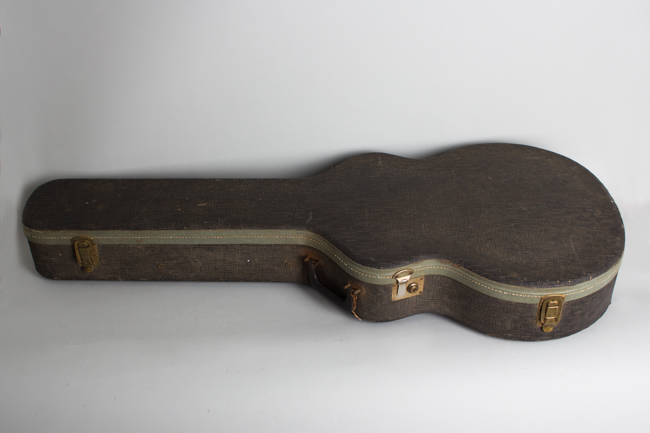 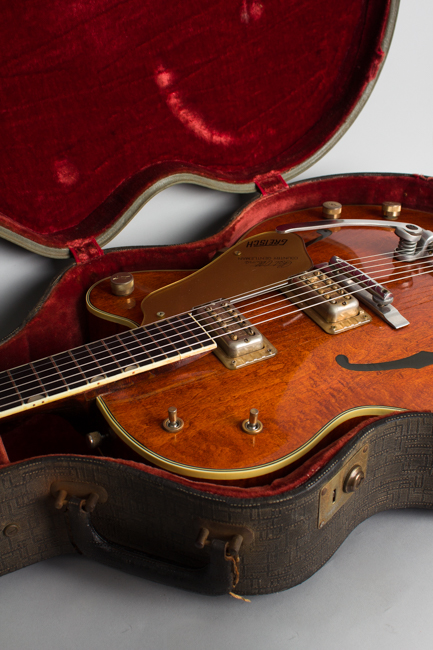 This is one of the classic Gretsch instruments from the company's best era; a Chet Atkins Country Gentleman from early 1960. The model was officially introduced in 1958 as a very upscale high-end guitar, with a list price of $525.00. At the time only the White Falcon was priced higher. The "Gent" was the top of the Atkins-endorsed line, produced only in limited numbers in the 1950s -- there appear to be only 5 total 50-unit batches issued before 1960, and not more than a couple more in this next year.

The Country Gentleman was the guitar Chet Atkins himself wanted from Gretsch -- he was actually less than thrilled with the previous Atkins-signature Hollowbody Model 6120. Since his endorsement had proved a boon for the company, they were happy to listen. For this new instrument, he specified a thin-line 17" wide body, deep walnut finish and "closed" f-holes, while keeping the Bigsby tailpiece, metal bridge and shorter 24 1/2" scale from the 6120. Other features included more binding everywhere, "Neo-Classic" position markers on the ebony fingerboard, Grover Imperial tuners and a metal plaque on the headstock with the model name and serial number.

Atkins particularly disliked the DeArmond Dynasonic pickups Gretsch was exclusively using, and requested the company use new humbucking units designed by his friend Ray Butts in his signature instruments. Gretsch was happy to oblige and bought the license from Butts to make the new pickups in house for the entire line. This guitar mounts two early patent-number "Filter 'Tron" pickups (Gretsch's name for the new units) surrounded by sculpted plastic pickup rings.

The guitar's top is solid with no f-holes and heavier bracing inside than earlier Gretsch guitars, features requested by Atkins designed to increase sustain and reduce feedback. The Gretsch-logo Bigsby tailpiece on this guitar is a style introduced soon before it was made, replacing the older Bigsby-branded one. This guitar has a very early example of the Gretsch "standby" switch on the lower quarter of the top, something not commonly seen until the next year.

The first-generation single-cutaway Country Gentleman is a fairly rare guitar. The design was altered in 1962 with a double cutaway body, and after the Beatles arrival in the US in 1964 with George Harrison playing one sales went through the roof. The early style "Gent" like this remained the instrument preferred by Atkins himself for both recording and live use throughout the late 1950's and 1960's. This example is a good playing and fine sounding guitar, a classy instrument by any standard and one that certainly captures the signature Atkins sound and vibe.

This is a well-preserved guitar overall. The finish is all original except for some minor touch-up around the heel from a well-executed neck reset. The brown lacquer remains relatively clean with some typical checking and minor play wear, mostly on the back of the neck. The body finish shows hardly any play wear on the face; the back has some light buckle wear and one long scratch that looks like a crack but is not deep into the wood. The binding on the body and headstock is solid with very minimal shrinkage, while the neck binding also exhibits some slight shrinkage and minor cracking in the higher end of the fingerboard. There is none of the wholesale binding deterioration that is the bane of many vintage Gretsch guitars today.

The hardware is mostly original, with a couple of exceptions. The bridge is a genuine late '50s Gretsch compensated metal bar but the base is an aluminum Bigsby unit not generally used by the company. The pickguard is an old reproduction in the correct style, but with markings more appropriate for a later 60's Country Gentleman. There is some wear overall to the gold plating, which has a lovely muted patina. The neck has been neatly reset as noted, the angle is excellent and the guitar plays well and sounds excellent. It includes a nicely preserved original deluxe Gretsch OHSC. Overall Excellent - Condition.
×