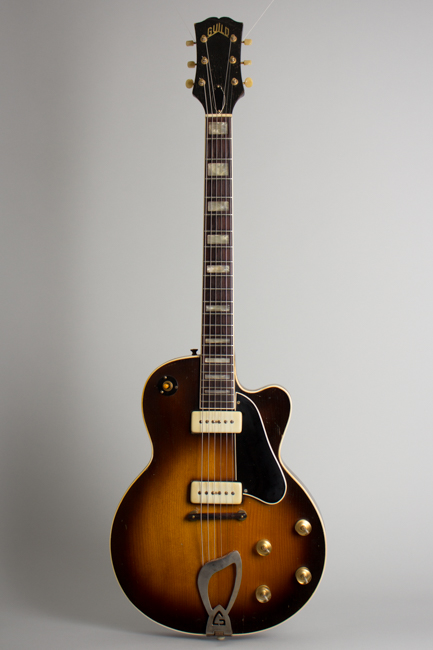 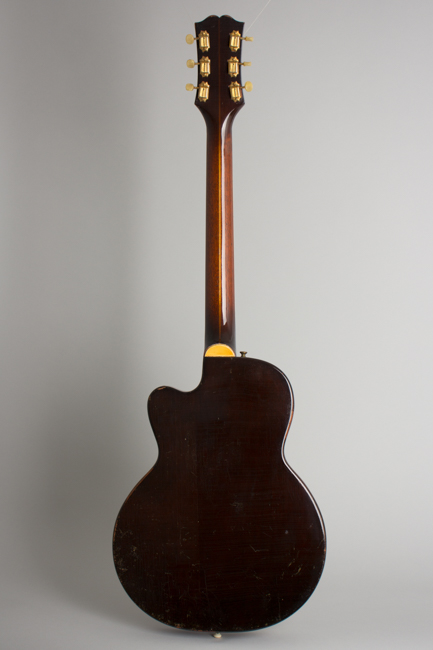 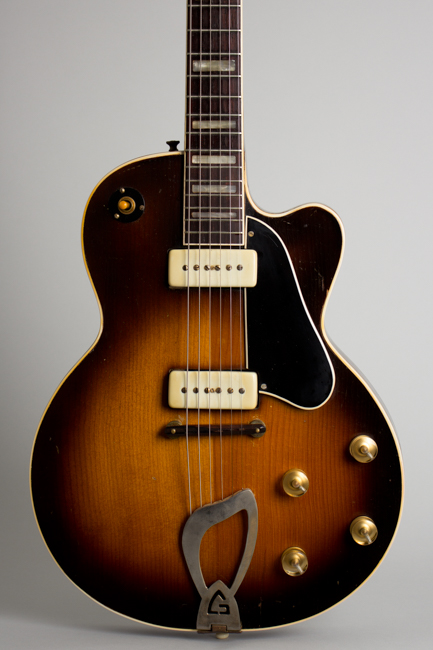 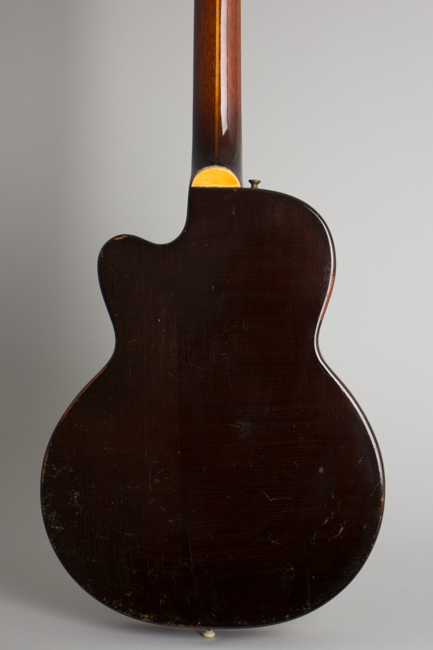 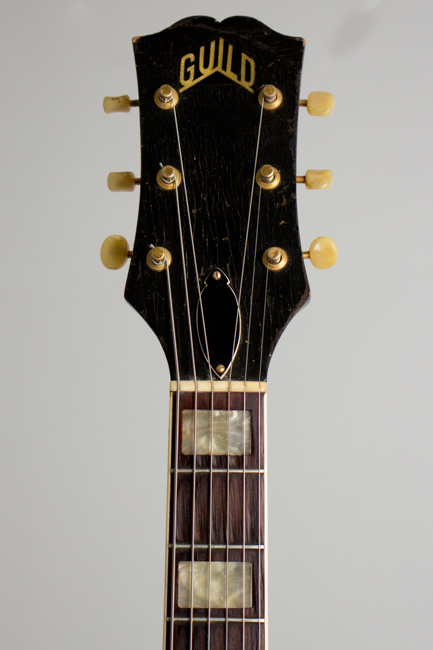 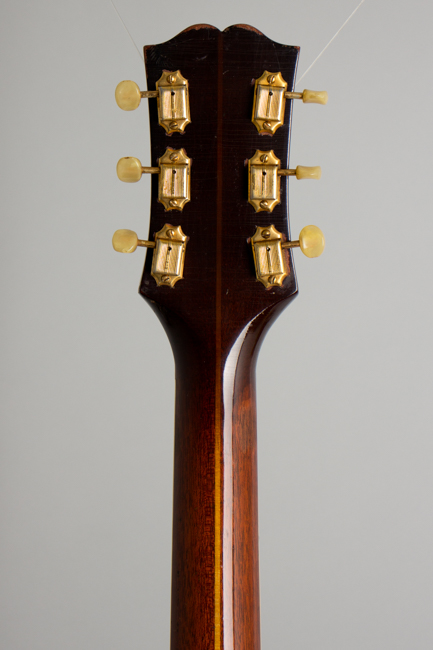 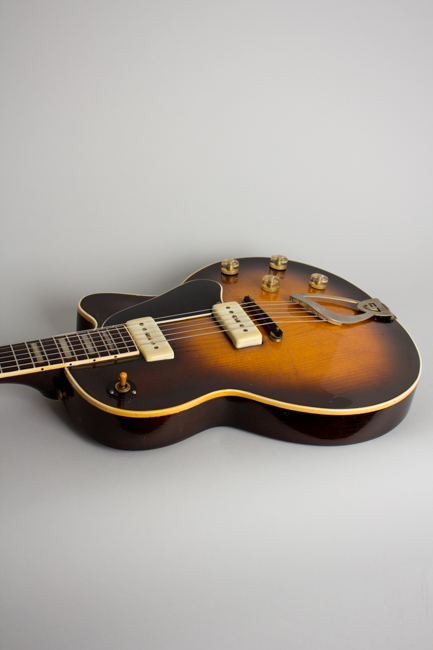 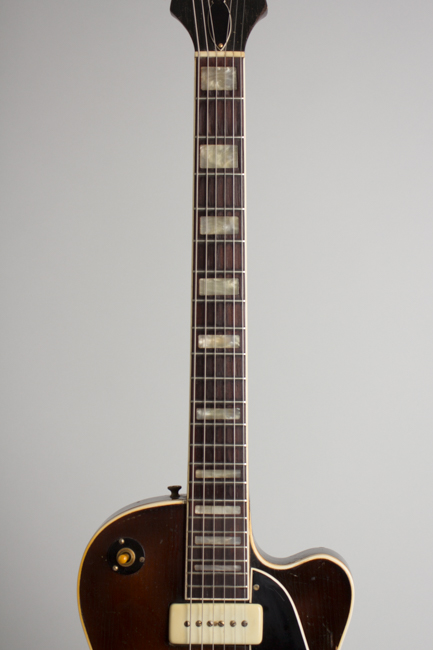 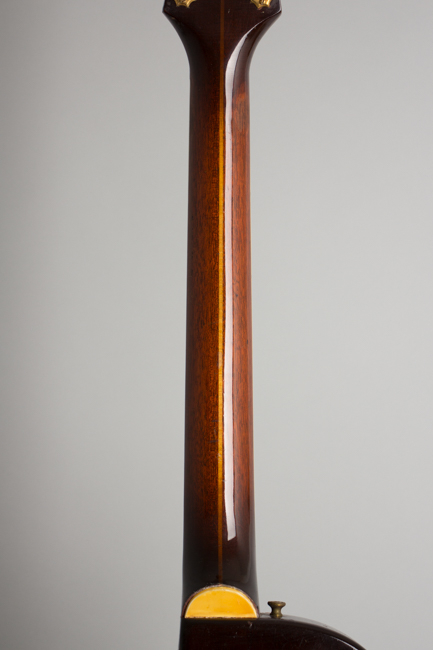 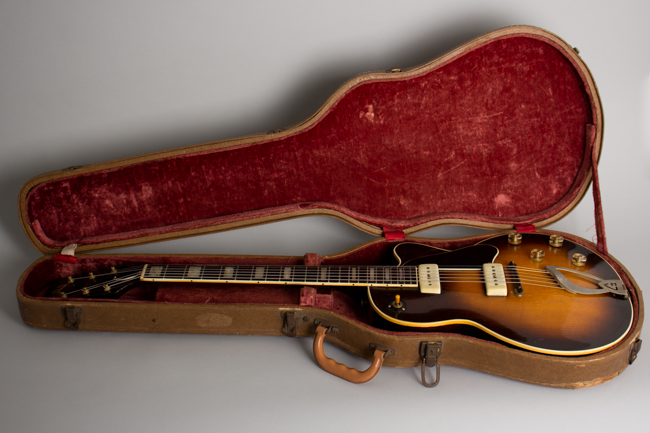 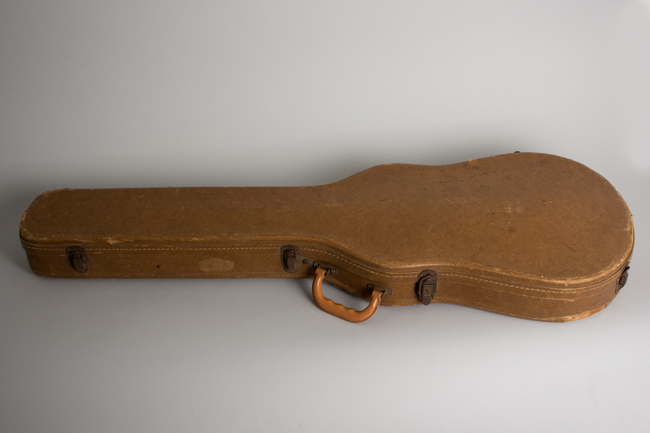 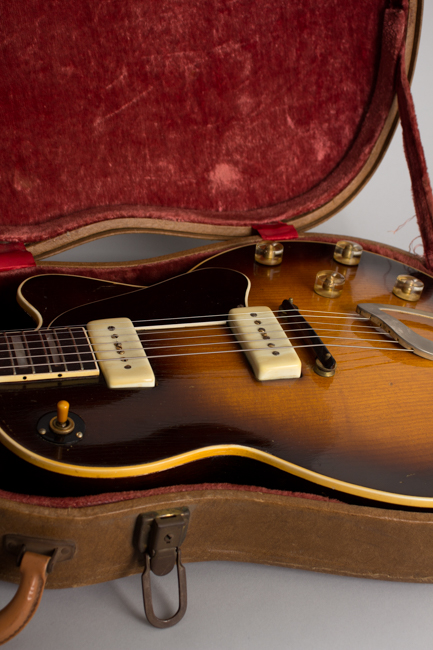 Guild's M-75 is one of the company's most interesting original designs, their take on an idea that was kicking around New York in the early '50s -- a small semi-hollow electric guitar to compete with that new-fangled solid-body Les Paul from Gibson. Gretsch had come out with the Duo-Jet, a flashier take on the not-quite solid concept. At the time there seemed to be some resistance to the true solid-body in New York where many studio and broadcast performers worked. The archtop guitar was their preferred tool and the major NY-based builders -- Gretsch, Epiphone and Guild all eschewed actual solid-bodies in favor of this hybrid up into the next decade. While the M-75 looks somewhat like a Les Paul, it is much lighter with a more traditional archtop-flavored sound.

In the mid-1950's Guild offered a growing line of full-sized archtop electrics, but the M-75 and its down-market sister the M-65 were arguably their most modern and distinctive offerings. Introduced in 1954 the "Aristocrat" is a classy little guitar, with higher end touches like gold plated hardware and block inlay on the bound fingerboard. The top is laminated spruce without soundholes, set over a mostly routed-out mahogany body. This gives the M-75 more of an acoustic tone quality than the Gretsch Jet series guitars that have more internal blocking.

The two white covered pickups look like Gibson "soapbar" P-90's but were locally made by Fransch electronics in Woodside (Queens) NY. These were standard on most 1950's Guilds; they have a lower output but a sweet and clear, somewhat microphonic response and add to the M-75's more acoustic character. The neck is mahogany with a laminated center strip and a bound, pearloid block inlaid rosewood fingerboard. The tuners are gold-plated individual Kluson Deluxe with the translucent plastic buttons specific to this model.

This M-75 dates to around 1955 (there is no impressed serial number) has some transitional features specific to the early part of the decade. The knobs and pickguard are the older style gradually supplanted as the 1950s rolled on, likewise the small teardrop-shaped truss rod cover. The switch is secured by a screwed-down mounting ring, also an earlier feature. The headstock is faced with a older wood overlay that Guild replaced with plastic later in the 50s; the "Guild" inlay is the newer 1954-5 version replacing the cruder older version seen on the very first M-75s. There is one anomaly on this guitar-the switch is mounted upside down, selecting the treble pickup in the up position. This is factory done that way and seems resistant to being turned around, so we have left as it is.

The M-75 was not a failure but was a somewhat under-appreciated instrument in its day, and never achieved the recognition it deserved. Players are often amazed at what a versatile and comfortable little guitar this is. While not as much of a straight rock instrument as the Les Paul and other solidbodies, it handles effortlessly and feels like nothing else. More than 60 years on The Aristocrat endures as a still-unique design and one of the original Guild company's finest moments.

Overall this is one of the nicer (and older) examples of this fairly rare model we have seen. The instrument has some general wear but retains all original finish and hardware with just some minor repairs over the years. The finish remains all original with noticeable checking (most heavily on the top) and a collection of the typical dings, dents and scrapes. The lower side is then most heavily worn along with some spots on the back. The neck is relatively clean with some thumbwear in the first position, while the face of the headstock is for some reason more heavily checked and worn.

The binding -- which is often deteriorating badly on 1950s Guilds -- is fully intact. It looks to have been reglued in spots, leaving some small marks along the body and top edges. A small extension has been inserted just above the neck joint, to make up for shrinkage. The fingerboard binding is solid with no deterioration at all, the heelcap is shrunken but still intact. There are lamination checks to the wood on the top just below the tailpiece and around the jack, but no cracks extending through the wood.

All hardware on the guitar is original; the gold plating is mostly worn off the tailpiece but still nicely intact on the tuners. The original rosewood bridge saddle has had the ends undercut to allow lower action settings but still works as intended. The original frets are still in good shape, there is some wear to the fingerboard but the guitar plays very well. It is still in the original brown HSC, a nice survivor of Guild's earliest days. Overall Excellent - Condition.
×