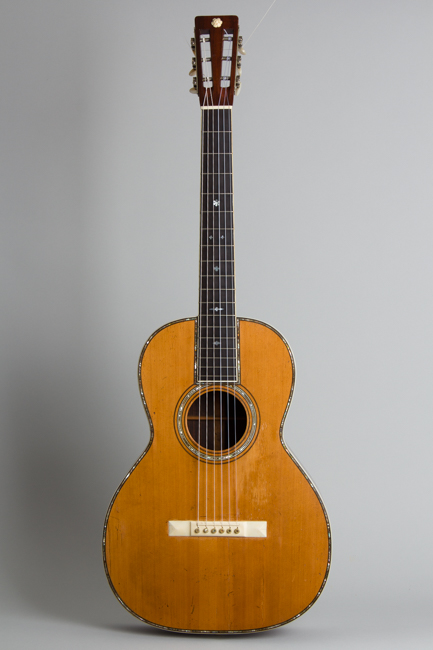 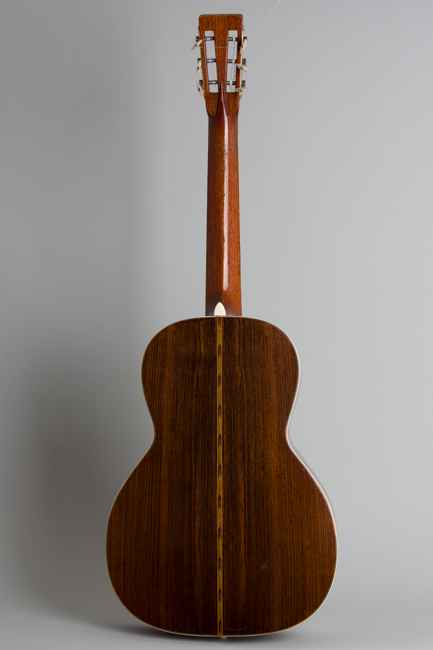 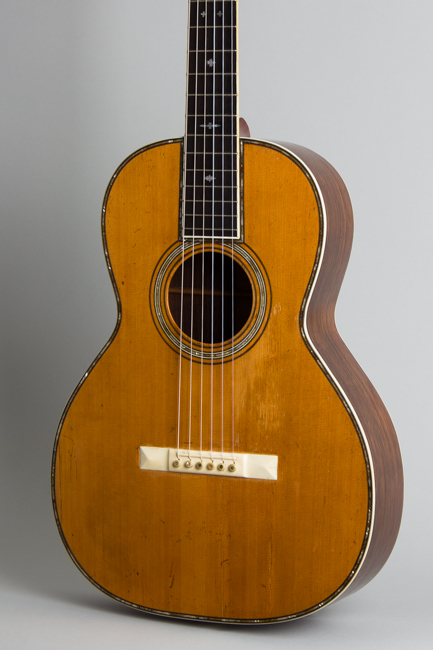 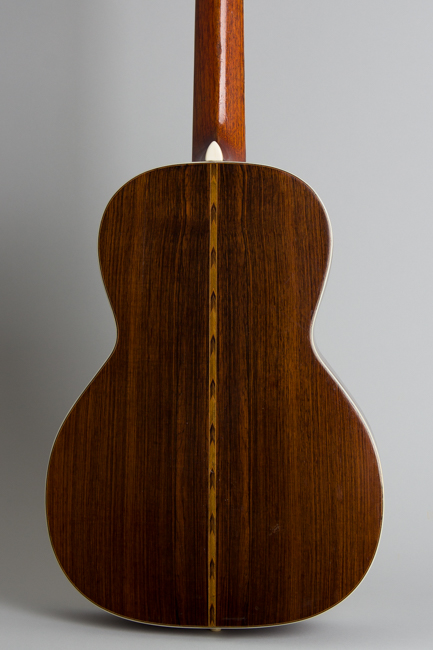 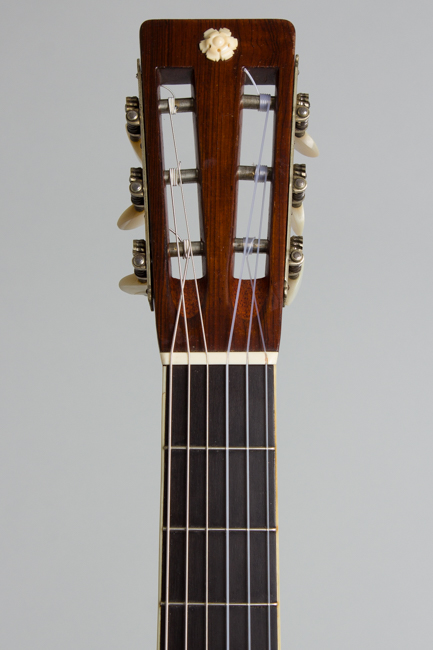 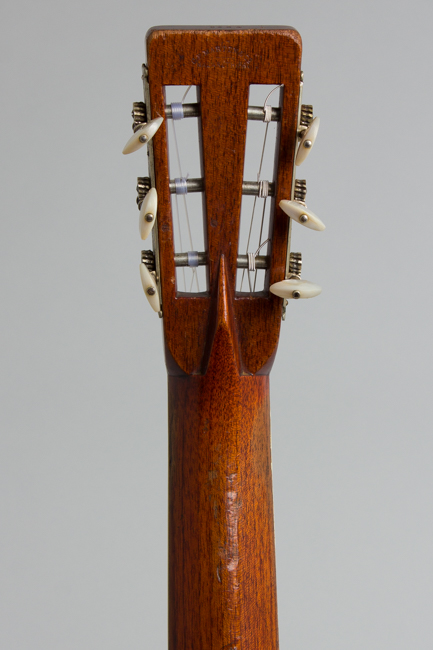 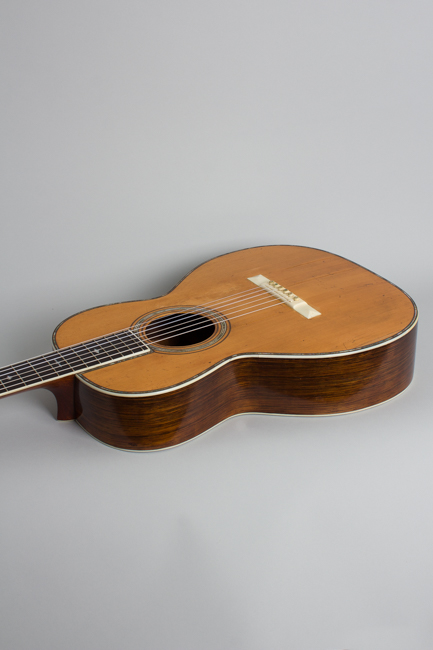 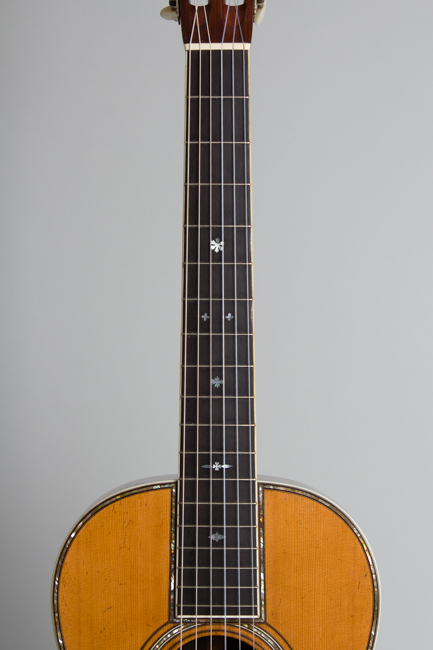 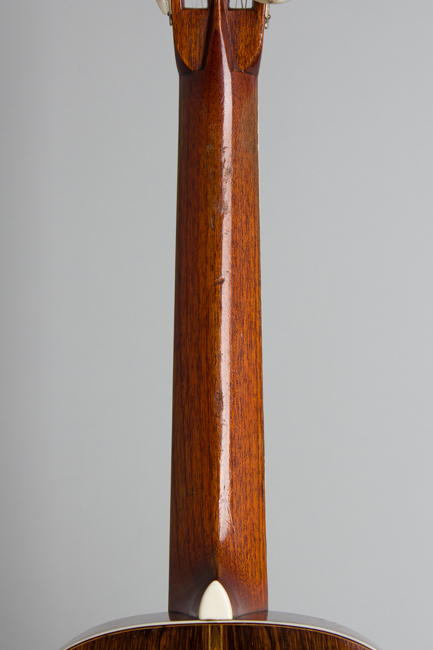 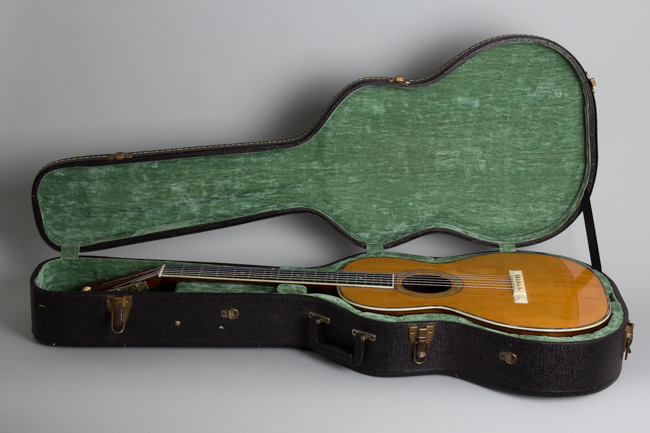 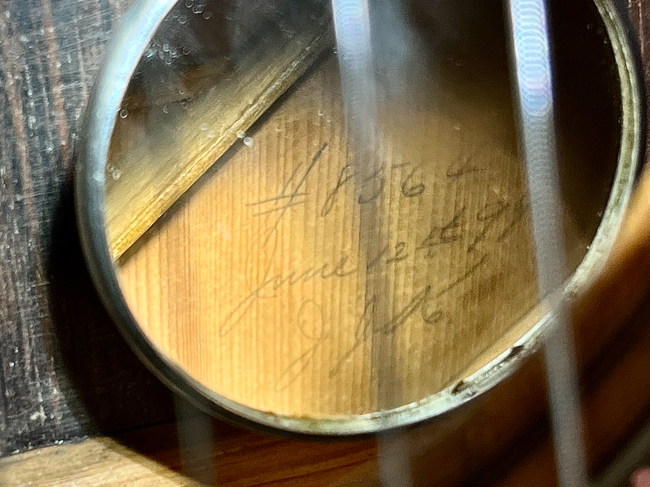 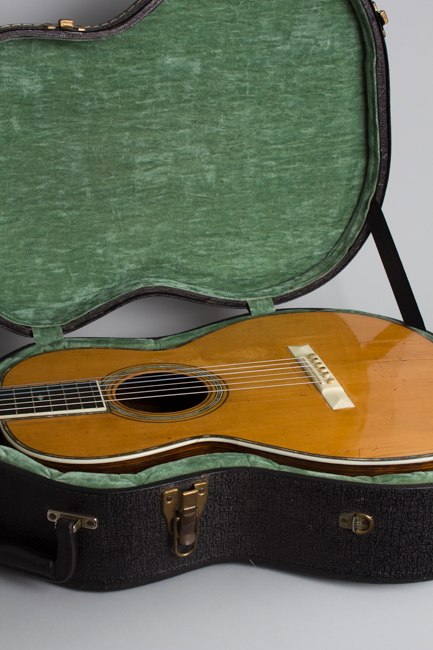 This stunningly beautiful pearl-top Martin seems to come to us from a time long ago, and indeed well into the 21st century the year 1899 seems eons away. It has a decent amount of wear and repair but remains a fine playing and beautiful instrument.

When this guitar was made Martin was a very small shop, almost universally considered the finest American guitars made although Lyon & Healy would have begged to differ! At the time Martin (and indeed most "good" guitars) were intended exclusively for gut strings; steel strings on a guitar were a new idea widely despised by the class of folks that could afford one like this. 1n 1899 the list price was $80; if that seems laughable now it was a lot of money at the time; when instruments in the Sears catalog could be had for 98 cents!

All of 11 00-42's were made 1899, a time when a good year for Martin was a few hundred instruments sold. These pearl-trimmed Martins are at once opulent and austere, the company's calling card in the Gilded Age. Martin's workers lavished their finest materials and workmanship on the highest grade Style 42 and 45 instruments, not relying on just decorative elements. Notwithstanding the finely wrought pearl bordering to the top, this 00-42 remains at its heart a musical instrument built for sound.

This is the 564th serial numbered Martin guitar; they used an estimated prior total of 8000 to begin the system in 1898. That number is stamped on top of headstock as well as neck block, an idea Martin abandoned early in the 20th century. The underside of the top is hand-dated June 12 '99 in pencil with the serial number and a signature; it does not appear to be Frank Henry Martin's but one of the other craftsmen there. The top is very delicately X-braced with a tiny bridgeplate, as suited for gut strings.

This guitar is made from absolutely superb straight-grained Brazilian rosewood for the back and sides, the tightest-grained Appalachian spruce for the top and extravagant blue, green, and pinkish hued abalone for the border inlay. The neck is Spanish Cedar with a dark ebony fingerboard, inlaid with decorative shaped pearl. All binding is ivory, as is the bridge; there is an elaborate wide inlaid wood backstrip. The silver-plated engraved-plate tuners have pearl buttons. On the headstock face is a small addition, the ivory or bone carved flower from an 1890s S.S. Stewart banjo tailpiece. While not original we find this to be a charming addition and very in character with the instrument and period.

This is a wonderful playing guitar if not a prime collector's example. The 00-42 was built in very small numbers for some years, with the peak not coming until the late 1920's. This fancy and expensive Martin was obviously a well-used instrument and must have many tales to tell!

This extremely lightly built guitar survives in very good playing condition, it has been heavily used and had quite a bit of work done over the years. The neck has retained the original 19th century varnish, with a later French polish lightly applied onto the body over some strum wear (below the strings) and old crack repairs. There are dings, dents and scuffs overall most heavily on the top. The original ivory pyramid bridge, bridge pins, saddle, nut, and binding still remain, with signs of repairs over the years. The bridge had been reglued (probably more than once) and a small maple cap was added onto the original bridge plate, to help preserve the bridge pin holes.

Splits in the Ivory binding have been neatly glued down in various places, and pieces of ivory have been replaced at the lower bout on the bass side, from the top and bottom. The original pearl inlay around the top has remained intact, save for a three filled in spots around the end of the fingerboard, which are only visible under ultraviolet light.

The very delicate top has had some crack repairs both old and new, from the neatly sealed grain split at the lower bout on the bass side, to the recently added splines between the bridge and the bottom of the guitar on the treble side. Internally a cleat was installed under the crack on the bass side, between the kerfing and the side on the lower bout. The splines under the bridge were skillfully added where three to four cleats were previously removed between the two tone bars extending under the bridge to the bottom of the guitar. A few pieces of kerfing along the lower bout have been replaced, and two of the original side braces look to have been reglued a long time ago.

The back has two sealed hairline cracks, one on the treble side of the upper bout, which has been cleated, and one on bass side of the lower bout. Three side cracks along the lower bout have been glued shut. There are also three filled in holes at the bottom of the guitar, that indicate a tailpiece was once installed on the body long ago. As noted the decorative floral piece was added to the headstock face, probably when it was new.

The neck has been reset, possibly more than once through the decades. There are traces of glue around the top of the neck block from a previous neck set. Two small screw holes in the back of the headstock, presumably from an old strap hitch, have been seamlessly filled in. The original fingerboard and bar frets show no signs of wear, with the original fingerboard inlay still intact. The tuners are the original deluxe pearl-button strips. Even with the wear and tear this is a truly beautiful instrument that plays and sounds divine with modern Nylgut strings, sonically no worse for the wear and being a over 120 years old! It is housed in a later hard case. Very Good + Condition.
×