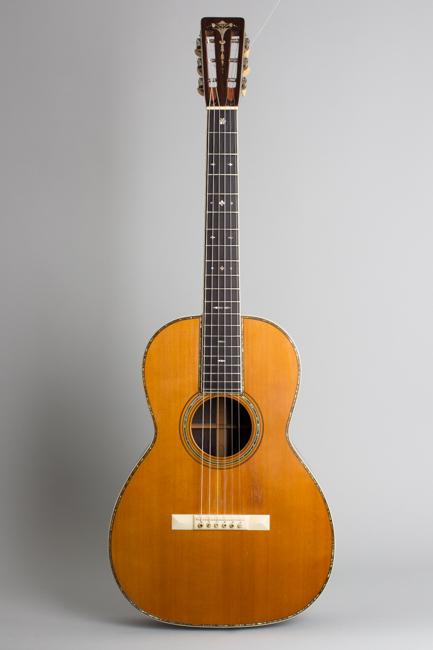 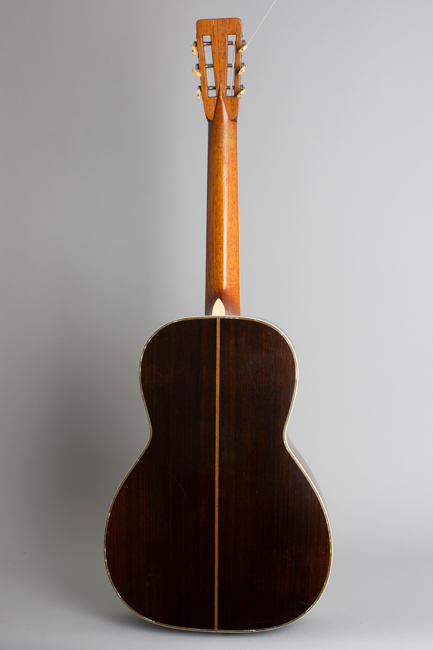 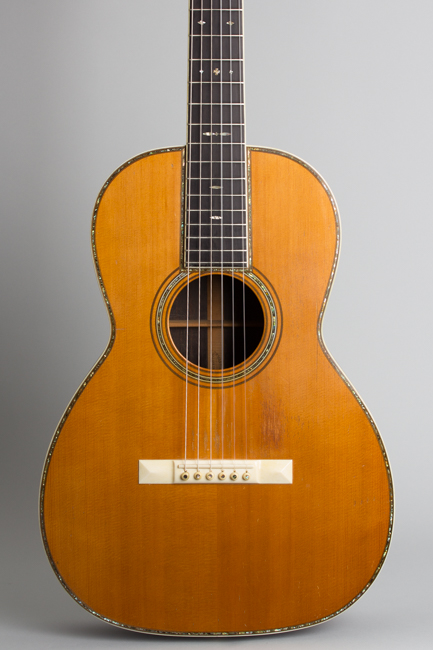 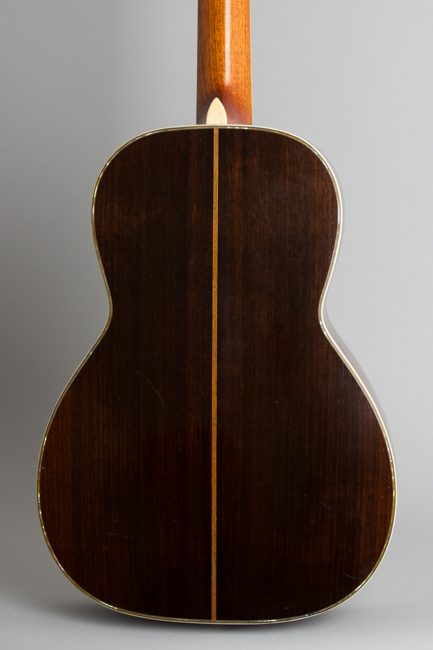 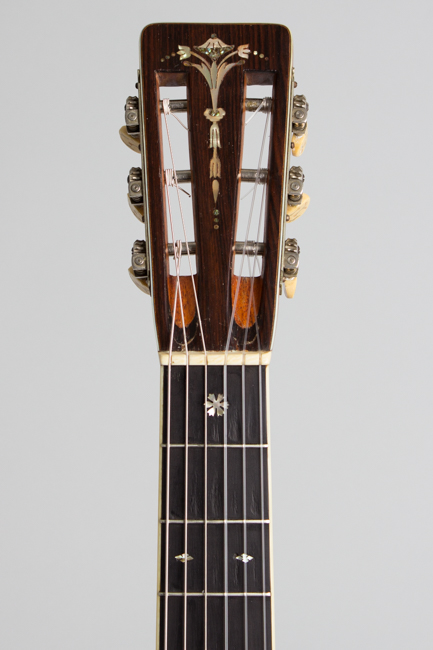 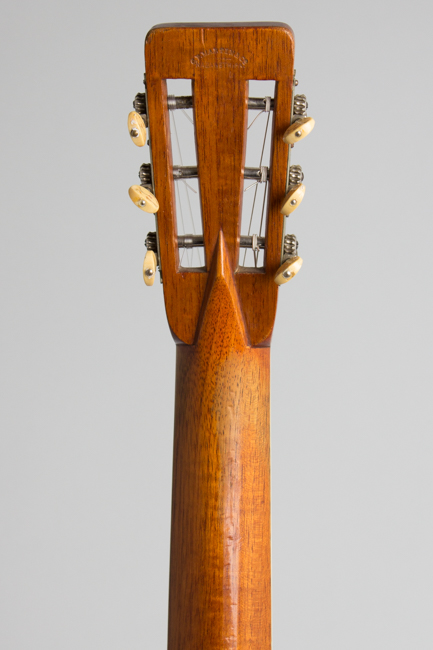 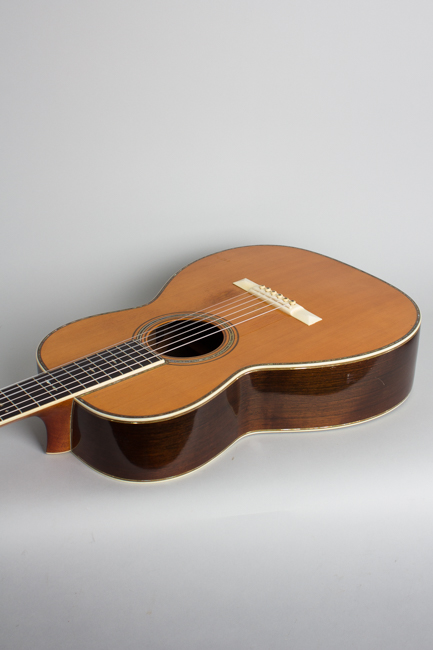 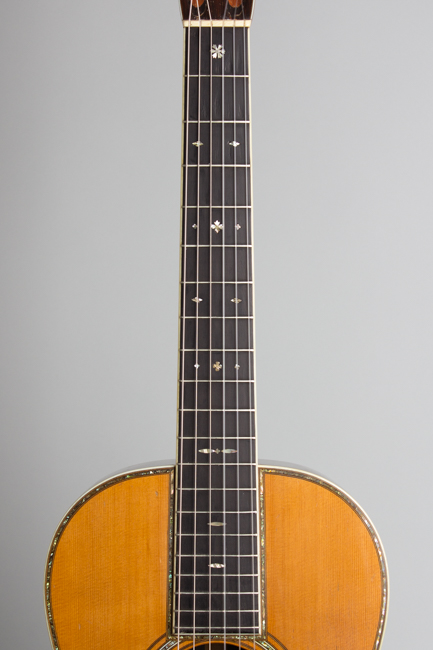 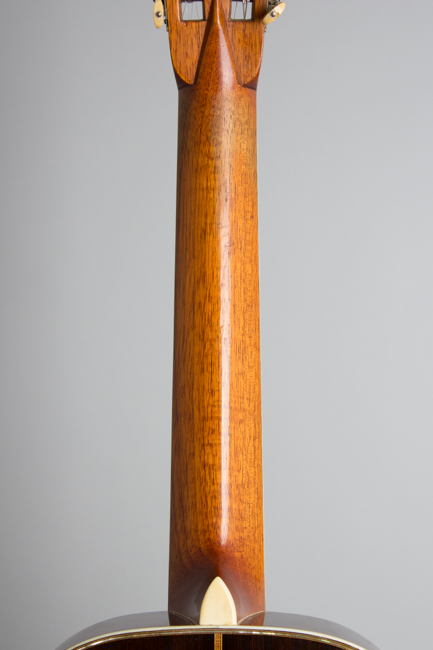 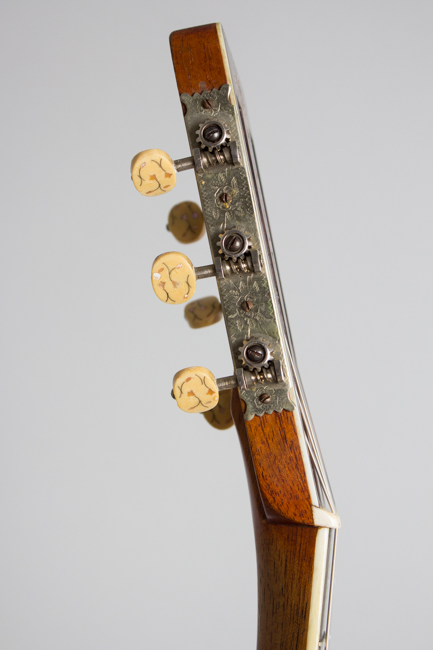 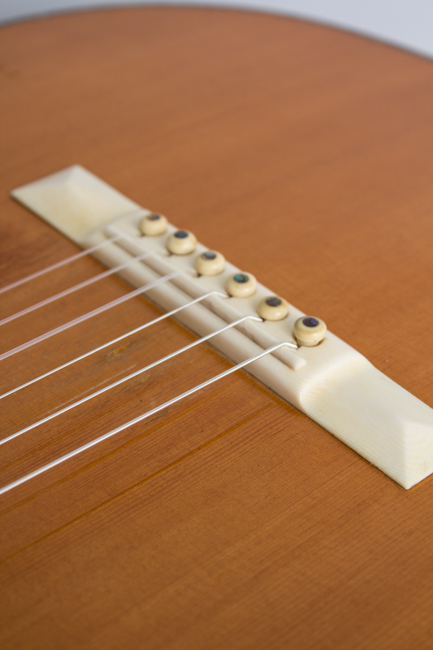 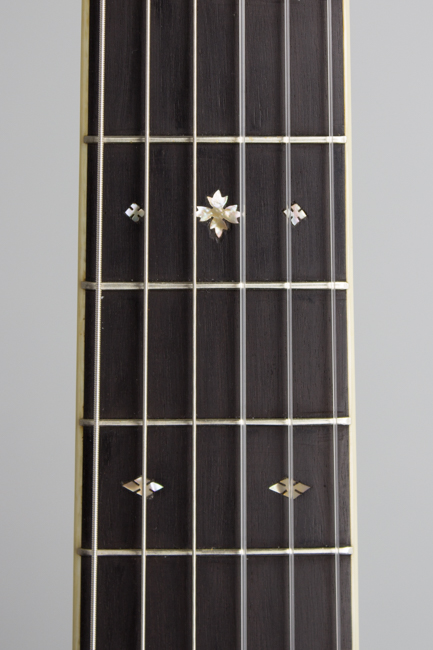 This is an extremely beautiful Martin guitar, part of a select group of the fanciest instruments produced in Nazareth 100+ years ago and arguably the finest American made guitars of their time. The 00-45 model was just under the top of the line, with only the larger 000-45 listed above it. All of these Style 45 instruments were produced in miniscule quantities even by Martin's low production standards of the period. All of 3 of these were made 1913 and prior to 1919 only between 1 and 3 examples of the model were sold in any given year. Less than 150 00-45 guitars total were built in the pre-war period, most in the opulent 1920s.

These early style 45's are not only lovely in themselves but are the stylistic precursors to the most sought-after flat tops ever made, she steel string Martin 000-45's and D-45's of the 1930's. Like nearly all pre-1920's Martins this guitar was built for gut strings; while it is possible to use light-gauge silk & steel on many we would not recommend it on this instrument due to the genuine ivory bridge fitted. Many of these fine instruments have been damaged by having had the heavy gauge steel strings common from the 1920s to 1960s fitted; this one remains in fine structural condition showing no signs of such trauma.

The Style 45 was originally a fancy upgrade to Martin's 19th century Style 42, which had been the top-of-the-line since at least the 1870's. Early in the 20th Century, Martin began offering an even fancier custom style with pearl inlay on the sides and back as well as the face and soundhole ring. The first was an 00 sized guitar built in 1902 which additionally featured a vine fingerboard inlay and inlaid mandolin style pickguard. A couple of other similar custom Style 42's were built with varying features in1903; in 1904 Martin codified the new top-of-the-line guitar as the Style 45, and built samples in several different body sizes from the small size 1 to the largest 000.

This 1913 00-45 remains in original and fully playable condition and is absolutely lovely to behold. The Brazilian rosewood used for the body is the finest, tightest grain imaginable; at the time Martin considered evenness of grain preferable to dramatically figured wood. The large elaborate torch inlay in the headstock practically glows with multi-hued pearl and abalone, the delicate green abalone body trim is similarly impressive. The bindings and bridge are genuine ivory, even at the time an expensive and luxurious material only used on very high-end guitars and mandolins. The tuners are the Louis Handel & co. machines with engraved baseplates and inlaid buttons similar to those used on Gibson mandolins of the time.

While by modern standards the 00 is a fairly small instrument this was a large guitar at the time compared to most of its contemporaries. It is a substantial feeling instrument, even with Nylon strings has a very sweet sound but considerable projection. The scalloped X bracing under the top is very light, the neck is fairly shallow with a soft "V" profile. Most of the musical stylings now played on older flat tops were not in existence when this guitar was built; for the sentimental parlor songs of the Victorian era to the light classical arrangements, dances and schottisches of the time this gut-strung Martin would have been just the ticket.

The gilded pre-WWI era was soon to end when this guitar was built in early/mid 1913. The list price was $115, a considerable sum but one that seems a bargain even compared to many contemporary offerings. At the time pearl-trimmed guitars were often considered showpiece or "ladies" instruments, intended as were many trappings of wealth to be seen as much as heard. While Lyon & Healy's Washburn brand offered more ostentatiously fancy pearl-encrusted guitars, no one ever built a finer or more tasteful high-end model than Martin in this period. The Style 00-45 is not only an exceptionally rare instrument but a testament to Martin's highest standards of quality. The guitar is currently set up with Aquila Perla strings and has a lovely if obviously old-fashioned sound. While having seen some play time and not absolutely perfectly preserved, this is a superb example and an enchantingly beautiful piece of Martin history.

Overall length is 38 1/4 in. (97.2 cm.), 14 1/4 in. (36.2 cm.) wide at lower bout, and 3 7/8 in. (9.8 cm.) in depth at side, taken at the end block. Scale length is 25 in. (635 mm.). Width of nut is 1 7/8 in. (48 mm.).
This guitar is very well preserved for its 107+ year vintage, especially considering the light construction throughout. The thin varnish finish has numerous small nicks, dings and scratches overall. The most notable areas with damage fully through the varnish are pickwear spots under the strings and a larger area in front of the bridge on the treble side. There are some case bites and scratches on the treble side lower bout, somebody was apparently careless with a lid long ago!

Structurally the instrument is remarkably well preserved. Due to expansions and contractions in the wood over time, there is minor checking in the grain on the top running off the treble side waist, as well as on the back near the lower bout, both of which have been neatly sealed. The original ivory bridge is solid and if it has ever lifted (as nearly all do at some point) was exceptionally neatly glued back down. The interior, including the tiny maple bridge plate is clean and completely original. There is some very light wear to the ebony fingerboard but the frets show virtually no wear, having only never been played on with steel strings. This is simply a wonderful instrument, redolent of a time long gone perhaps but a testament to the enduring Martin standards of quality and beauty. And the rosewood interiors still has a lovely delicate smell, not dissipated over a century on! Overall Excellent - Condition.
×