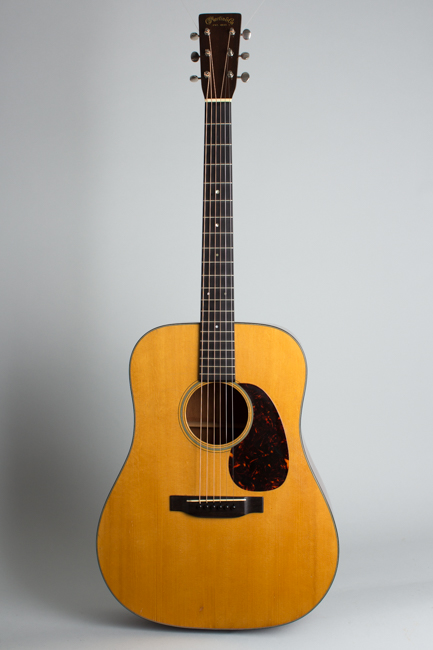 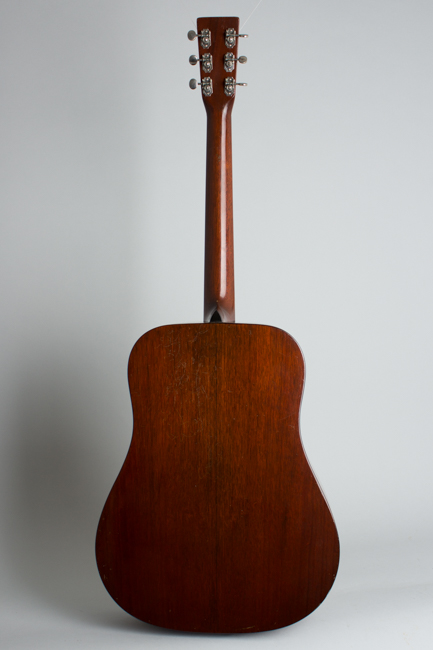 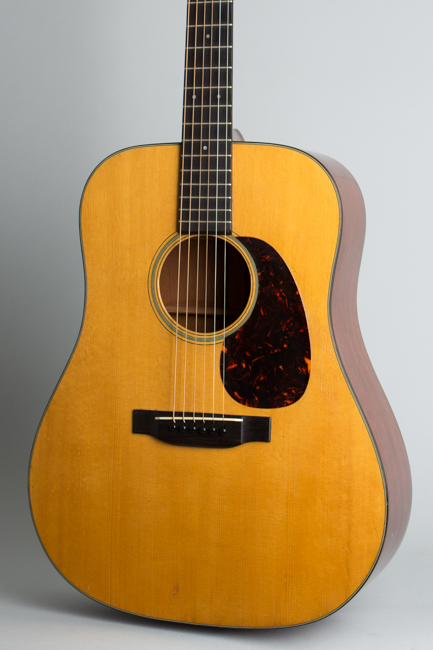 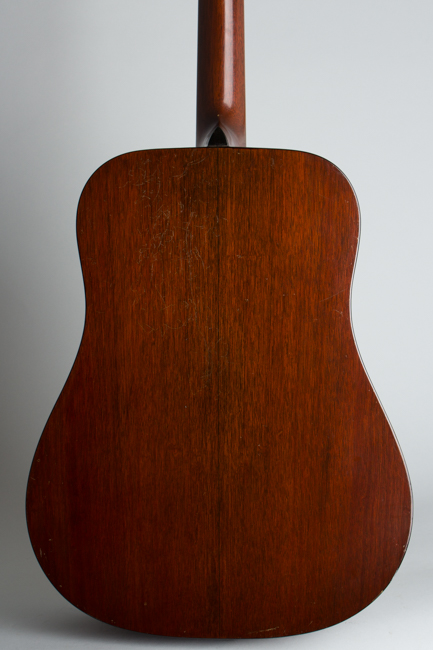 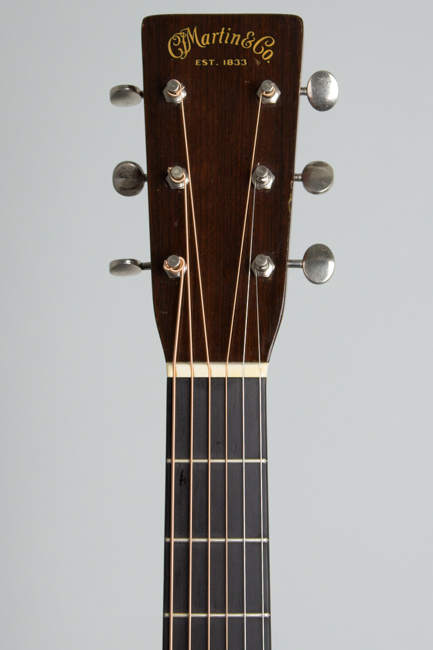 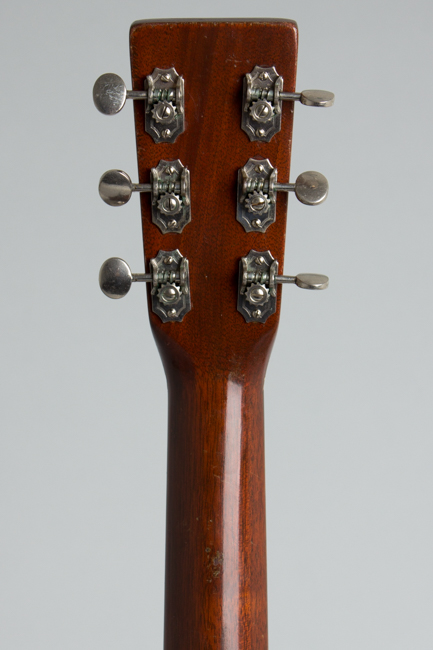 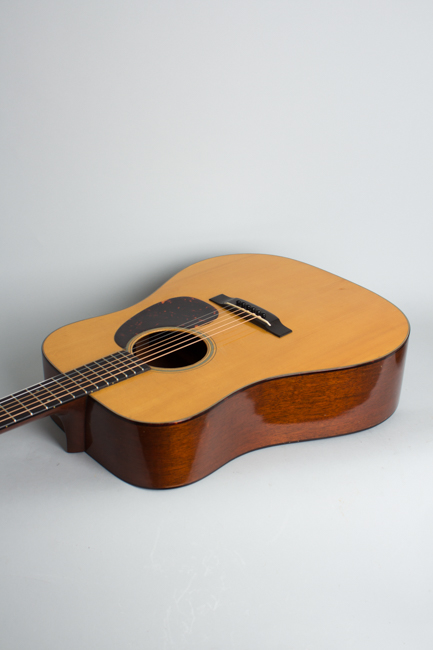 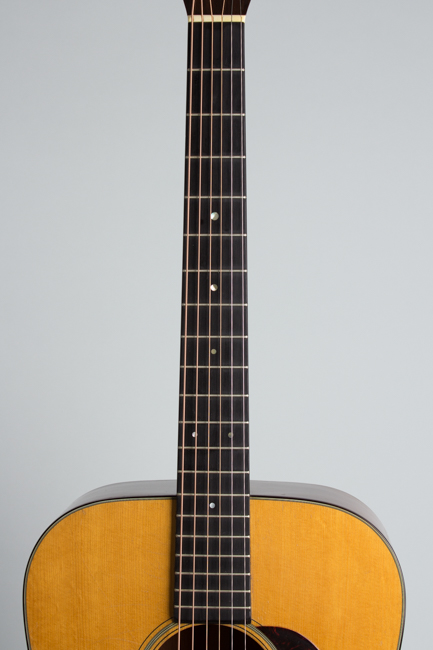 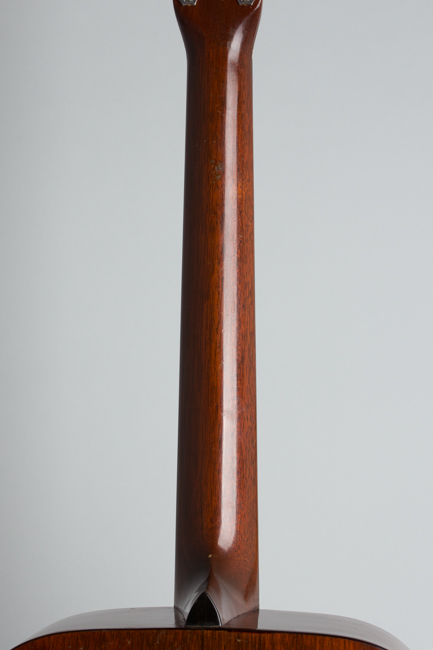 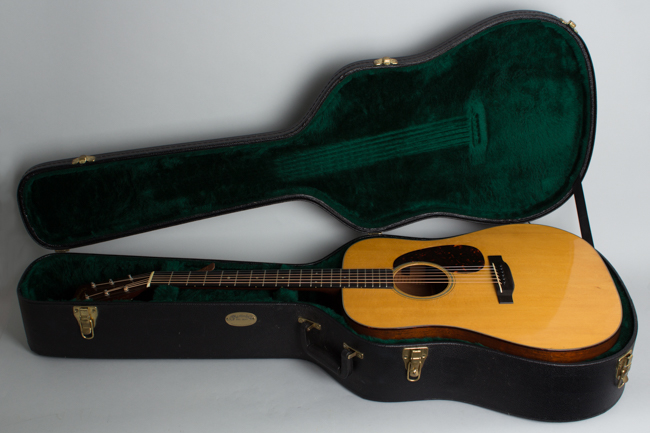 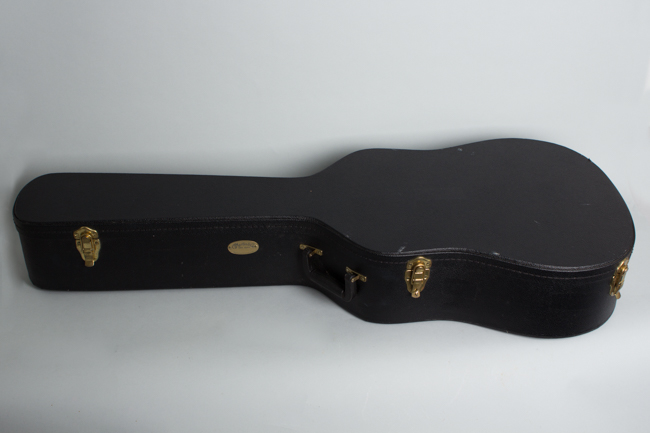 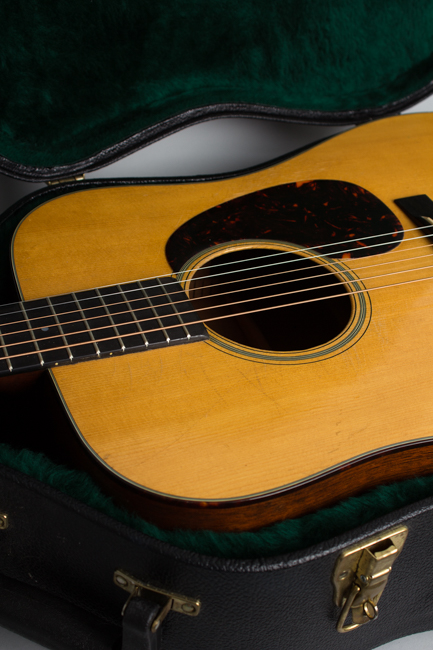 There are certain guitars that are simply the standard by which all others are judged; the Pre-war Martin D-18 is certainly one of them. This late 1941 example -- begun in October not long before the bombs fell on Pearl Harbor -- shows some fairly minor playwear, but remains in excellent playing condition and has the expected fantastic sound in spades. The power and depth of a Dreadnought combines with the sweetness, sparkle, and singing character of the best pre-WWII mahogany Martins in a magical mix, an exceptionally versatile flat-top guitar suited to practically any musical situation.

This D-18 shows the original classic features of the model, widely imitated ever since. The back and sides are Honduras mahogany and the top is tight-grained Appalachian spruce, bound on the edge with tortoise celluloid. The ebony belly bridge has a canted bone saddle. The pickguard is made of tortoise celluloid in a small "teardrop" shape, a design that often proved too small to fully protect the top from the ravages of enthusiastic picking!

The neck is mahogany with an unbound ebony fingerboard decorated with discreet pearl dot inlay. The peghead is faced in Brazilian rosewood with the gold "C.F. Martin & C." decal at the top. The neck profile is round backed but with the slightest hint of a "V" profile in the way the sides bear away from the center as it moves towards the nut. The tuners are open back individual Kluson units with metal buttons specific to this period.

There is far less wear on this guitar than is typical considering how many of these instruments originally got used, into the open mikes of radio or barn dance stages. In this environment a guitar had to have exceptional power and projection, and a large percentage of the Country and Western performers of the period found the Martin Dreadnought the best instrument to trust their performances to. In late 1941 the price of a new D-18 went from $75 to $83, a sizable increase mostly due to the effects of an already raging global war. They still sold well, but today 80 years later finding an example from 1941 or earlier as well preserved as this one is a rare occurrence.

In the minds of most acoustic guitar players, collectors, and historians, very few instruments approach the pantheon of the pre-war Martin Dreadnought in terms of sound and historical importance. Still today, this remains a fantastic performing or recording guitar, with the mellow depth of the Dreadnought mixed with a crisp slightly dry mahogany ring. This is a great just pre-war example, played over the decades but well-cared for and ready for many more years of service.

While not absolutely pristine this is a nicely clean and original guitar overall. Cosmetically it shows some evidence of play, but less wear than many. There are a number of light pick scratches on the top mostly above the soundhole that go into but not through the finish. The area under the lower edge of the pickguard has similar wear, a bit more deeply going lightly into the wood. There are some noticeable scratches to the back, mostly in the upper bout area. The original lacquer has aged and ambered nicely with some typical light checking, mostly on the top, and there has been no overspray added. Amazingly there are no cracks anywhere, which is almost miraculous for a Martin of this age.

The tuners are the correct original open-back Klusons; these have been neatly restored to the guitar as at one point there was a set of Grover Minis mounted (residue of the 1970s!). There is a little finish disturbance around the original bushings, otherwise this is not really noticeable. Everything else on the guitar is original, including the ebony bridge. This was cut down just a bit (on the treble side, mostly) long ago but retains good height; the bone saddle is later. Internally the only alteration is a small thin maple patch over the original maple bridgeplate, just around the pin holes. The neck has been neatly reset and the guitar nicely refretted with correct style wire so playability is excellent.

The sound of these lightly built pre-war Dreadnoughts is truly inspiring, and this one certainly does not disappoint. This is an exceptionally fine player's D-18, used but not abused having remained more original than many for just about 80 years now. It is housed in a newer Martin HSC. Excellent Condition.
×