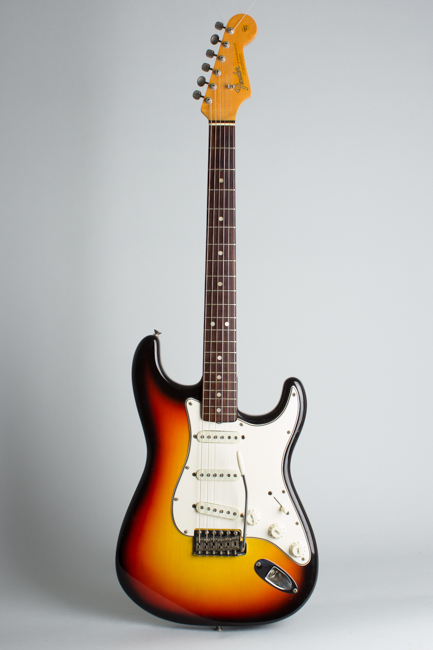 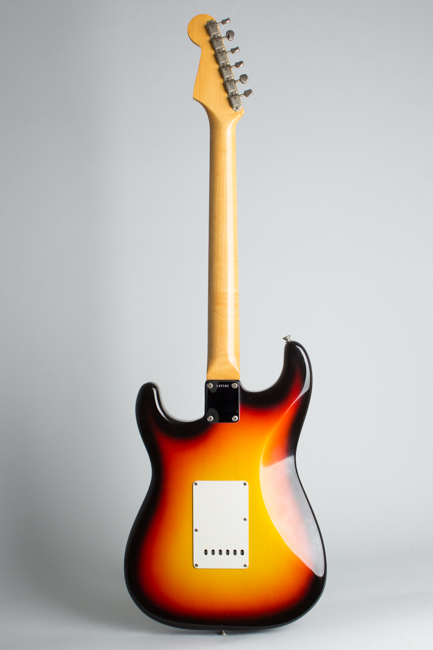 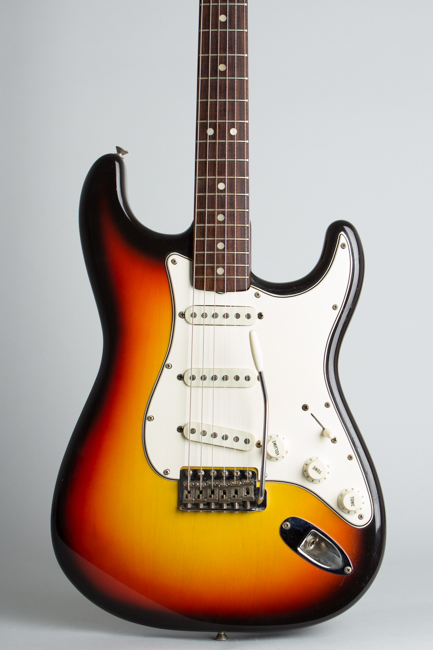 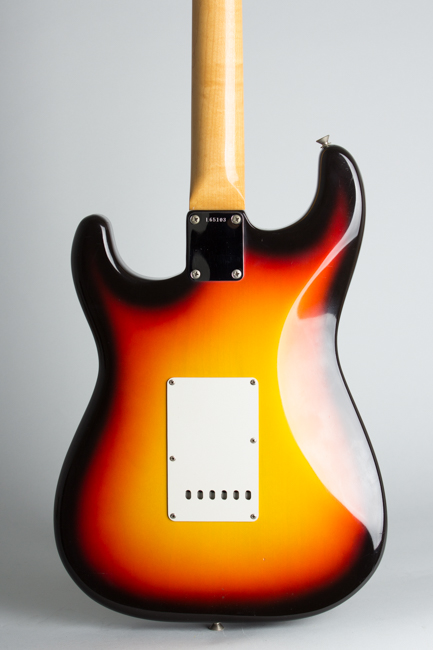 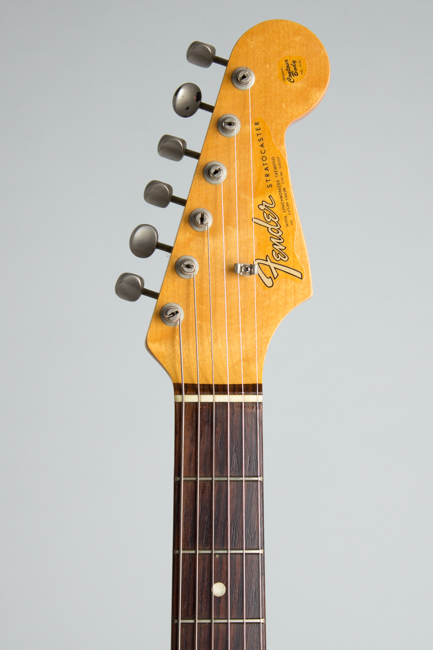 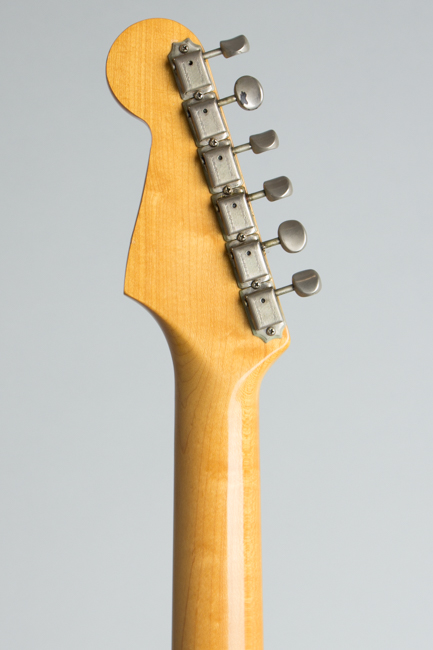 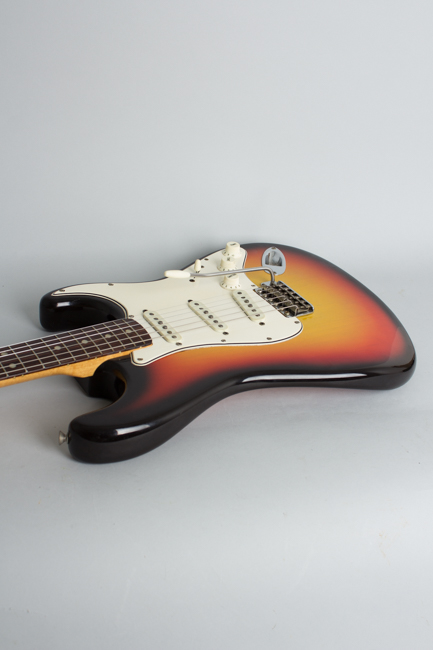 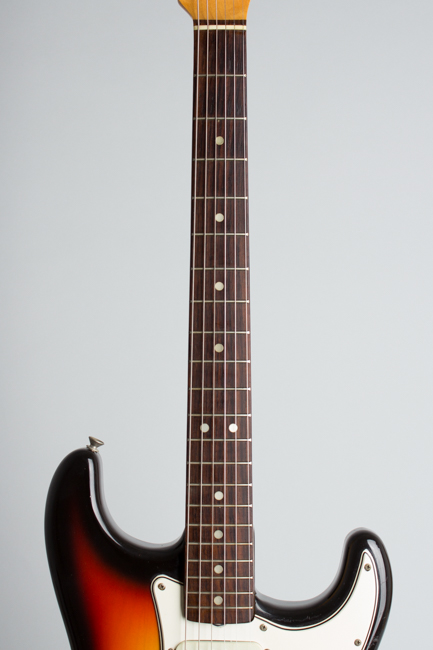 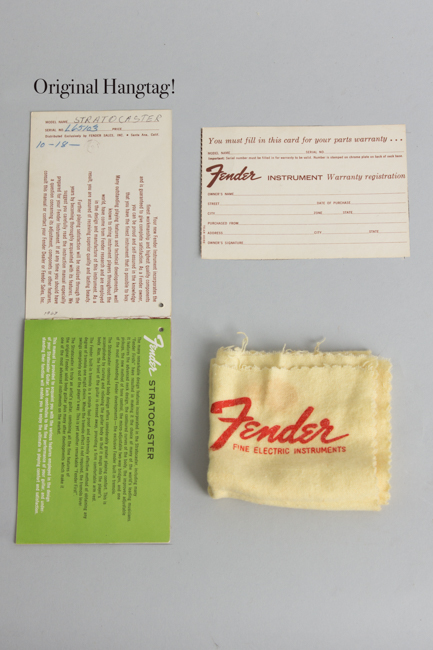 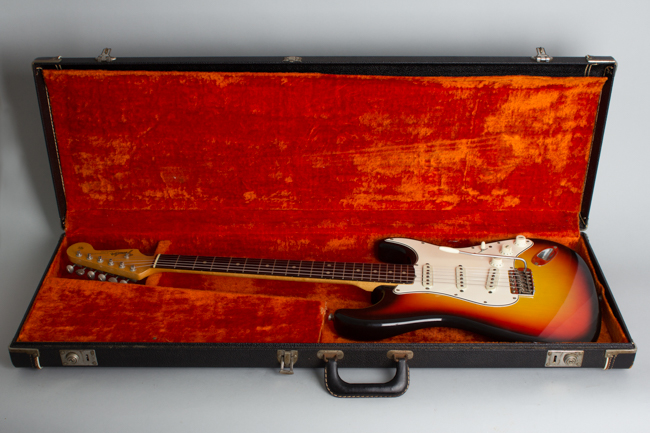 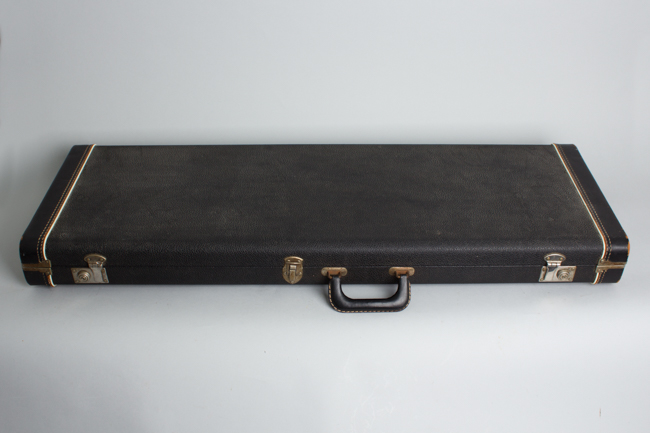 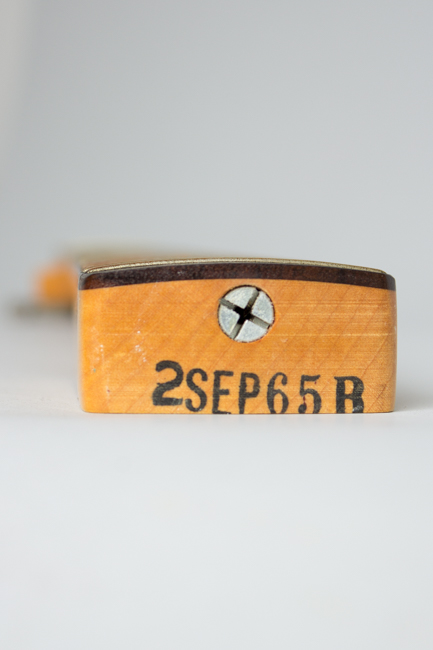 Hold the presses! In the 2020s these don't just walk in like this anymore! This is a truly superb and completely original example of a "transition" early-CBS era Stratocaster, with some VERY light wear but all original, unmodified, and relatively little used.

This Strat was built in the far-off fall of 1965. The neck code is 2 Sep 65B; the pots are coded 137 6510 (10th week of 1965) and the grey-bobbin pickups hand-dated 10-26-65. The complete guitar would have been assembled less than a year after Leo's company was sold to the giant CBS corporation and shows typical features seen at this time, mixing old and new.

The small Pre-CBS style headstock sports the newer gold "transition" logo that appeared in mid-1964. The sunburst lacquer finish on the body follows the trend towards the more quickly sprayed "bull's-eye" bursts that became the norm as 1965 rolled into '66, but is not as sharply demarcated as some with a nice mixing of the shades. The thin-lam rosewood fingerboard has the pearloid dot inlay that came in at the end of 1964, replacing the older "clay" dots. The pickguard is made of white ABS plastic, mounted over the scrap aluminum shielding plate used since 1959. Other hardware is consistent with Pre-CBS instruments; steel stamped bridge saddles and trem block, and the Kluson tuners CBS would replace the next year with their own in-house "F" plate machines.

This is a great-sounding, medium weight resonant Strat built just before "things started a-changin" in Fullerton as a consequence of the January 1965 sell-out to CBS. All three pickups have the typical mid-60s sheen, powerful and crisp without being excessively bright. The weight is typical for this period at a tad under 8 Lbs and it handles beautifully.

While PRE-CBS has been a watchword for Fender afficionados for decades, this early-CBS Stratocaster is still simply a great-feeling and sounding guitar, a far cry from what the instrument would evolve into a few years down the line. This one has a super 1965 vibe; while Pete Townshend and Jimi Hendrix were sacrificing '60s Strats for immortality, this one spent the great bulk of the last half-century sitting in its case, waiting for a chance to shine. The story is it was bought new in 1965 by a long-haul trucker, who was subsequently on the road for many years never quite found the time to really learn to play it! As it seems to have mostly sat unused since the 1960s loss is our gain!

OK, so this beautiful Strat is not absolutely mint, but it is certainly as close as we usually expect over five decades later and one of the best preserved examples from this period we have seen in a LONG time. The guitar remains 100% original and unaltered. It does not look to have been played much, or even taken out of the case a whole lot. The finish has virtually no fade at all; the colors are as bright as when it left Fullerton well over a half-century ago. Obviously this guitar never hung in the dealer's window!

There are some TINY dinks and dents into the body finish, most visibly on the treble edge of the top and near the jack where someone missed plugging in a few times. There are some light scratches and scuffs to the face, none going deeply into the finish. The lower bout treble side has some marks from moving around in the case. There are no chips or dings completely through the finish except one miniscule chip off the treble side of the neck pocket. The lower horn on the back shows some light scuff marks, and there are a few tiny dents on the back below the trem plate.

All hardware is original and complete. The pickguard has shrunken slightly but has only some minor pulling at the screws, with no popped corners or cracks. The trem backlpate is also completely uncracked. The bridge has some minor corrosion to the steel saddles, the screws and springs are quite clean. The original bridge cover is included but looks like it was not used; it seems to not be perfectly aligned to "snap on" properly and we are disinclined to force the issue.

Internally the electronics are all untouched original. The finish on the back of the neck has virtually no wear at all. There are a couple of fingernail narks to the rosewood board in the first position, the only fretwear to the original small wire is a tiny dink in the first fret under the B string. The decal on the headstock has some tiny bubbles and spotting but is better preserved than many '65s. There are some odd black spots on the B string tuner button that seem to resist removal.

If the above catalog of talking points seems extensive, remember this guitar is now 55+ years old and a far cleaner survivor than the vast majority of Stratocasters from this pivotal year. For many players these final small-headstock '65s are the last of the great ones before the CBS changes started piling up. This little-used guitar sounds great and plays just as it did then, with the classic fender twang of the ages. It resides in the original black Tolex "no logo' case with a passel of extras including the original strap, cord, polish cloth and hangtag, with the matching serial number. Excellent + Condition.
×