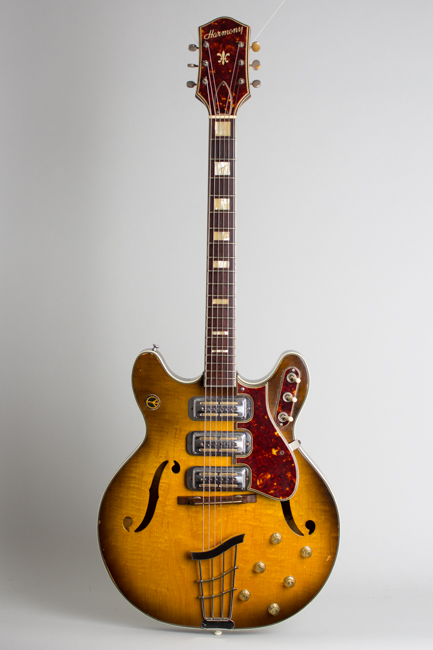 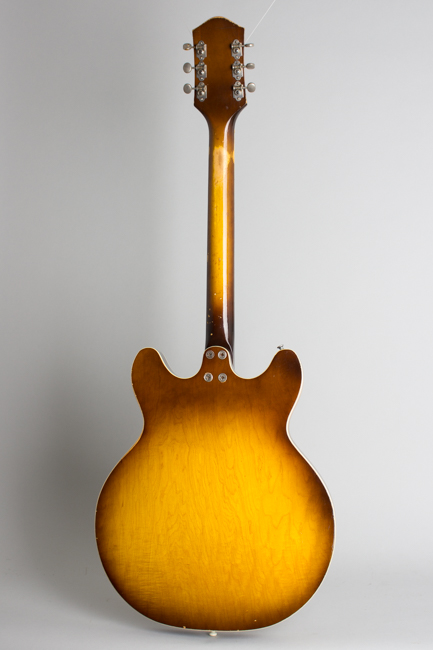 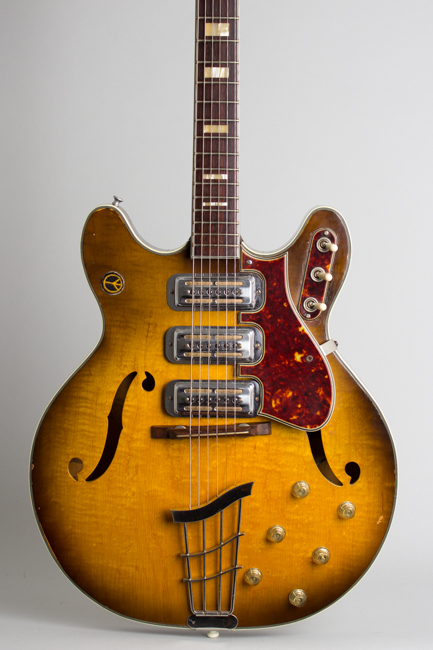 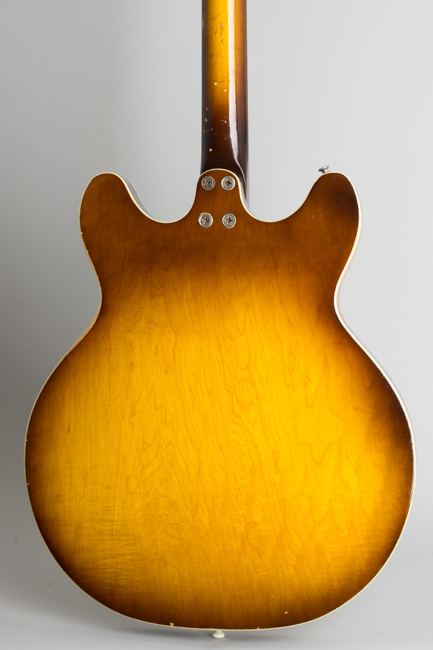 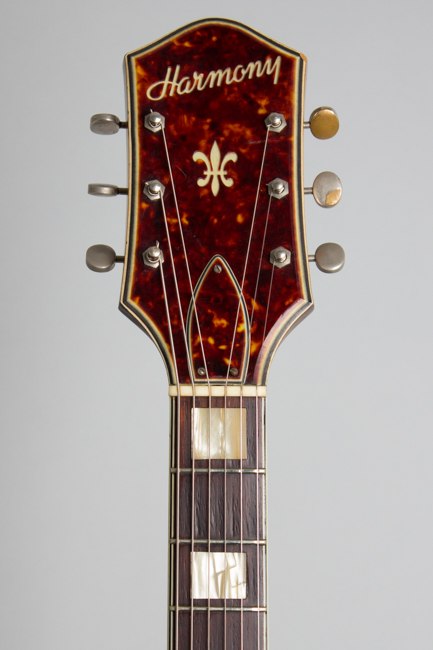 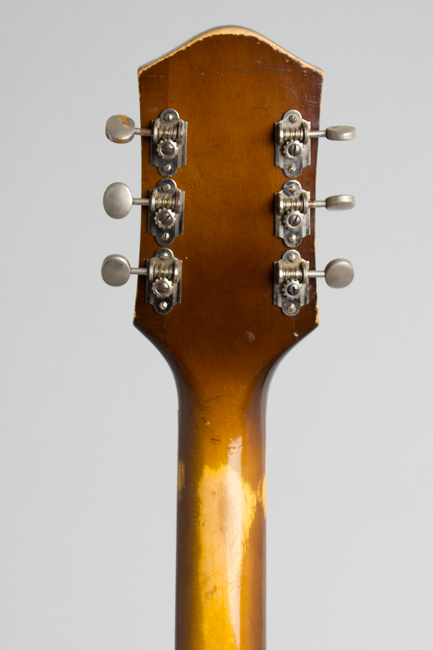 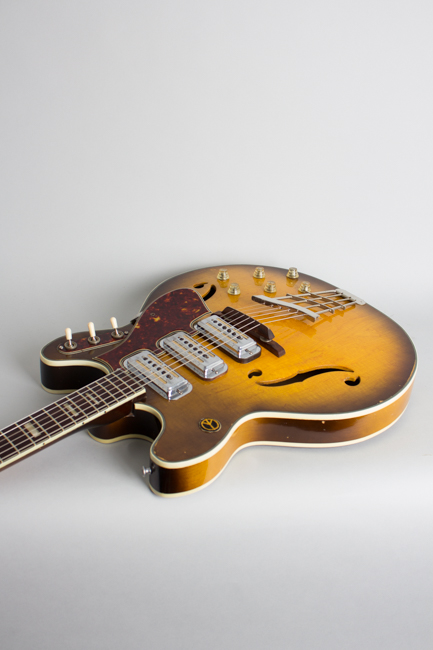 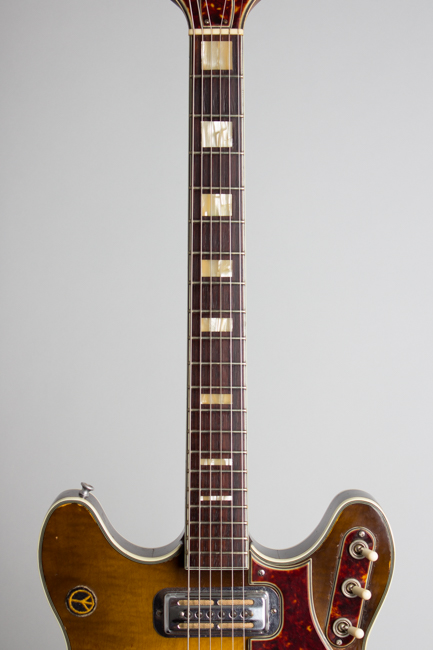 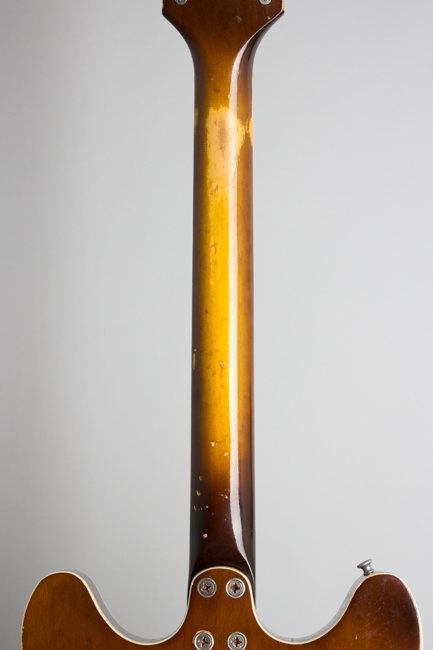 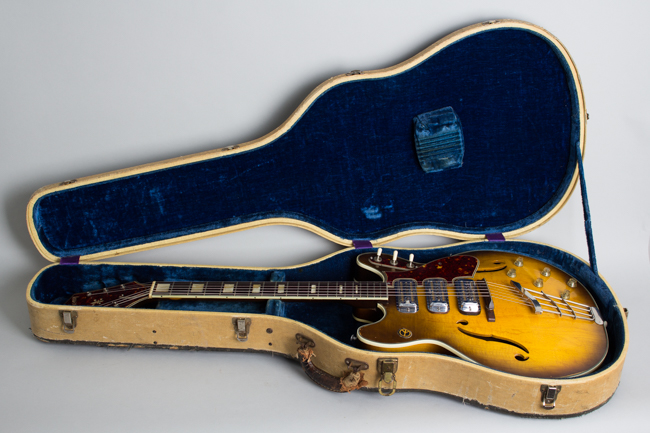 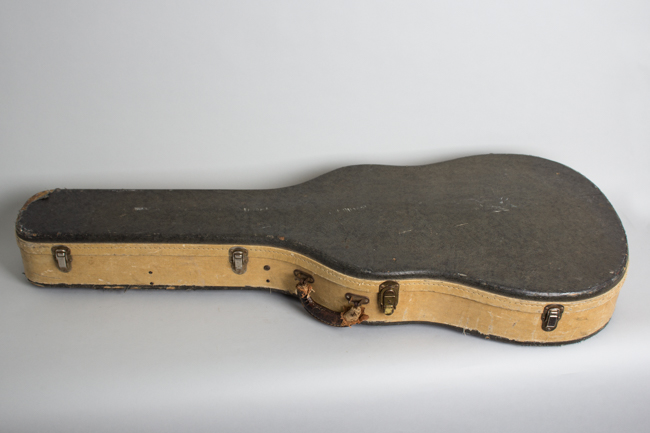 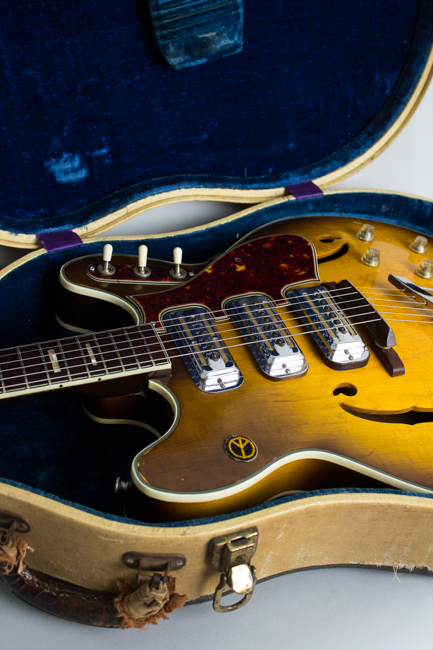 In 1960 this relatively flashy thinline hollow-body H-75 was the top-of-the-line model from Chicago-based Harmony. It graced the cover of the company's 1961 catalog, described as "Harmony's newest and finest" guitar. Variations were built under other brands and with an added Bigsby tailpiece, but the H-75 was the first of the breed. It followed quickly on the heels of Gibson's ES-335 models, which it outwardly resembles. Unlike those, the H-75 has a fully hollow body with no center block and a bolt-on neck.

With three of the now highly sought after DeArmond "Indox" gold-foil pickups and multiple binding on the body and neck this is a fairly deluxe guitar -- especially for Harmony, retailing in 1961 at almost $250. It is also a great-sounding, very versatile instrument with a large sonic palette. The three on-off switches allow all possible pickup combinations, and each unit has its own volume and tone control as well. The finish is a subtly blended brown-amber sunburst set off nicely with tortoise celluloid accents. The maple neck has a bound, block inlaid rosewood fingerboard and a nice chunky feel, reinforced with the then-new "Torque-lok" truss rod that actually works.

This very early first-year example was made in 1960, just after the H-75 was introduced. The workmanship is a bit cleaner than many Harmonys built a couple of years later during the frenzied guitar boom of the mid-60's.

This is a super nice example of one of Harmony's very best guitars, a garage band classic in both sound and style. The cool two-tone C75 hardshell case included with this guitar retailed at $49.50 all by itself, and not surprisingly is very rarely found with most buyers opting for the $22.50 C70 chipboard instead.

Overall this is a nicely original guitar, loved but not abused. The finish shows some general wear, mostly minor dings and dents with some fairly heavy checking on the body. There are some small but deep dings in the back of the neck in the 12-15th fret area, and the back of the neck is worn down in the lower positions. The finish around the switch plate has some disturbance from where somebody once tried to glue the plate down; eventually they gave up and just installed heavier screws at the ends.

The hardware is original and complete with no other modification except a replaced upper strap button. The one addition is more whimsical; a small embroidered Peace sign added to the upper body. Other than these points, the guitar remains original and a very good player with only some minor fretwear. The original HSC is somewhat worn but super rare, the only one we have ever seen with this model! Overall Very Good + Condition.
×