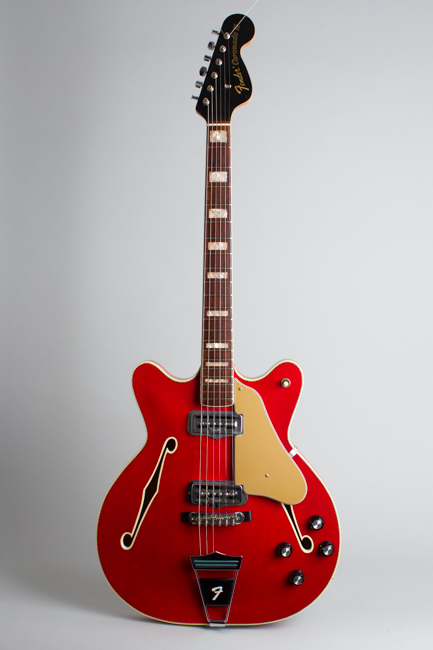 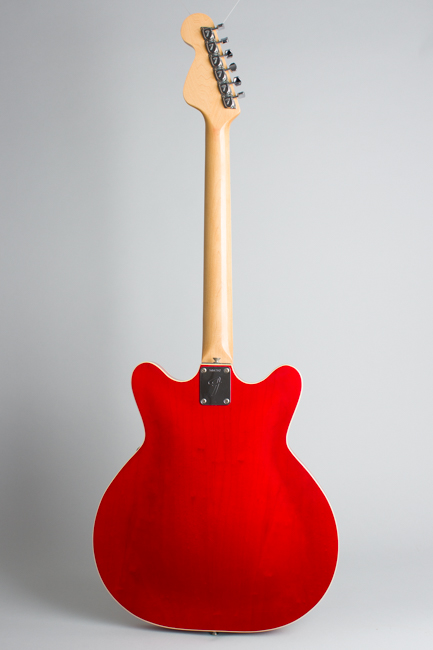 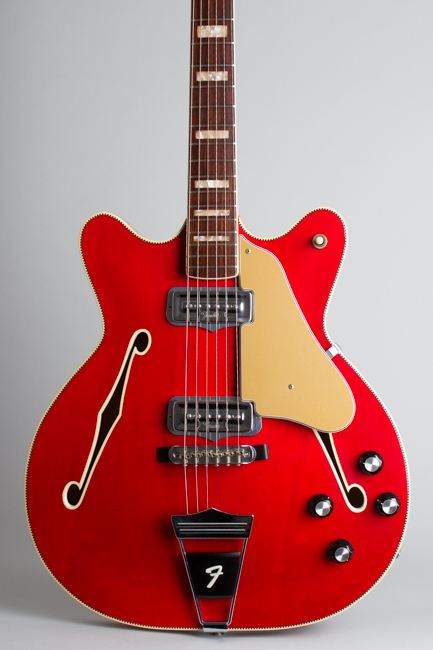 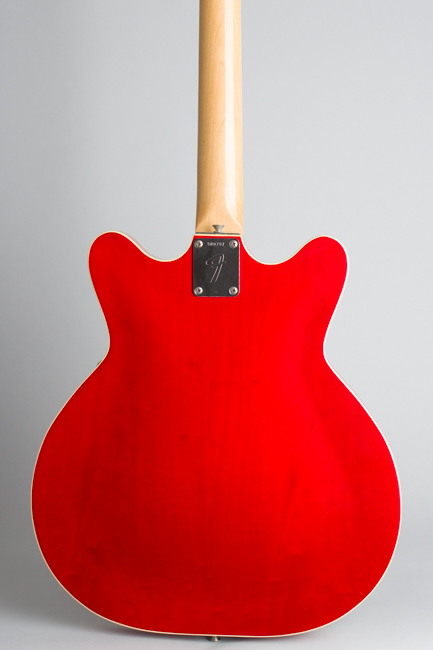 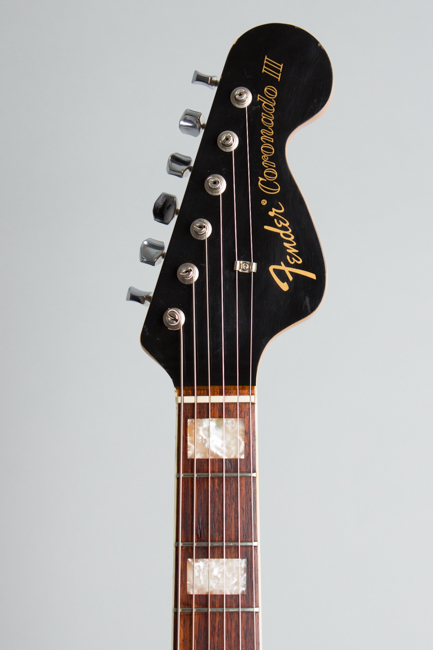 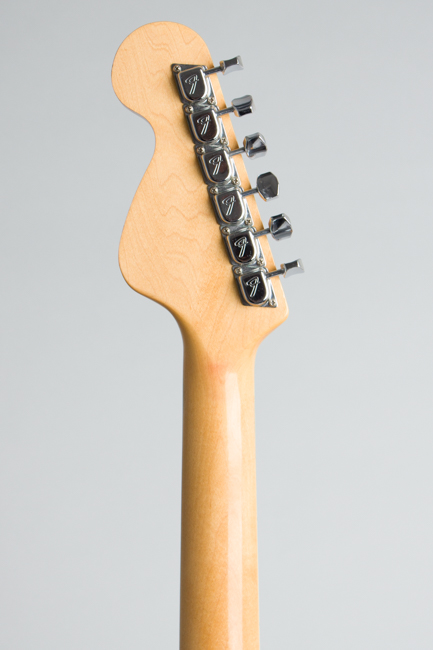 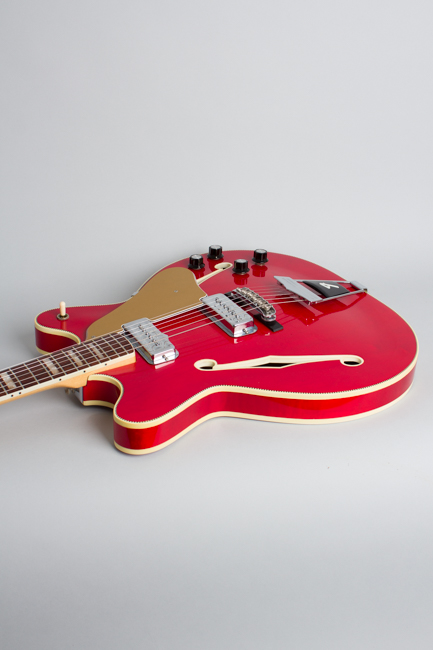 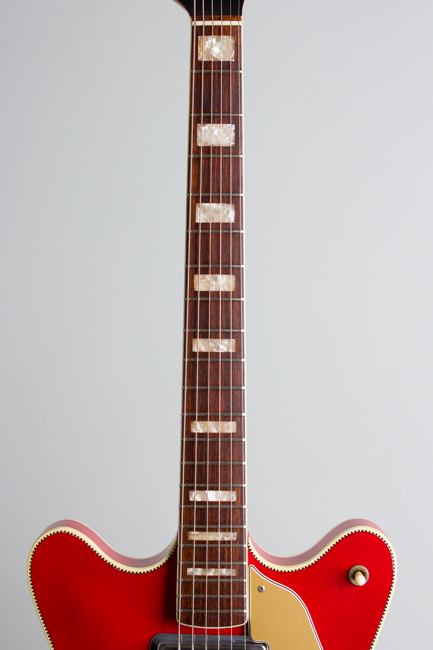 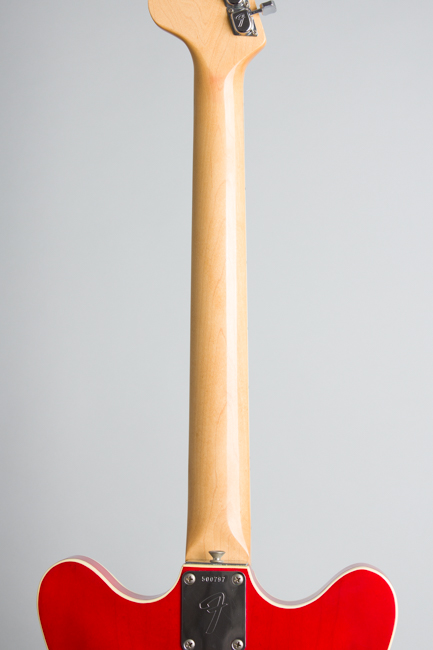 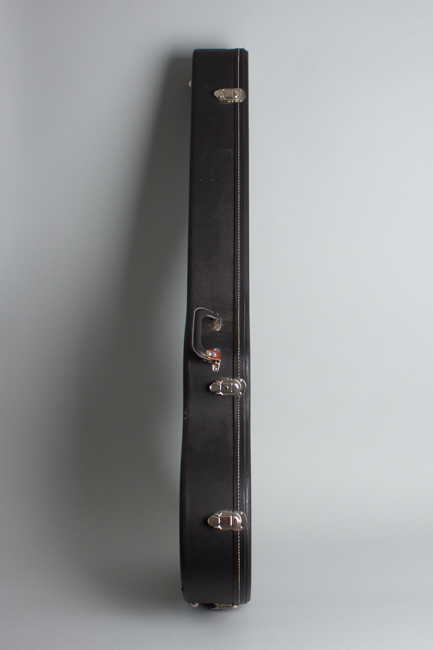 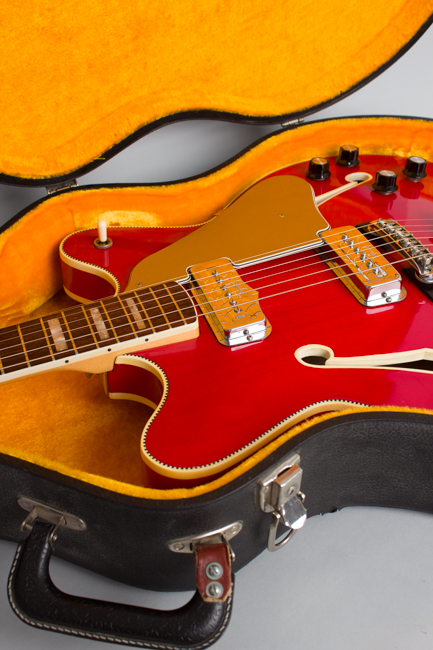 Fender's 1966 Coronado models were the CBS management's attempt to challenge Gibson, Gretsch, and Guild in the booming 1960s hollowbody electric market. The new owners felt Fender should offer instruments to cover the entire market, not just their traditional solidbody strengths. The Coronado guitar and bass line was launched in January 1966, Just a year after CBS bought the company. While ultimately not a big hit with either Fender loyalists or players of those other brands, the Coronados remain interesting and often very attractive guitars.

This early model Coronado II shows some specific features suggesting it was likely shipped towards the beginning of the run. Former Rickenbacker designer Roger Rossmeisel was involved in the design, and it bears some of his touches. This Coronado mates a bound, block-inlaid Fender neck to a double cutaway, thin-rimmed fully hollow body with bound edges and bound f-holes. The checkerboard binding material on the top is typically seen as a Rickenbacker feature. The finishes offered were initially only Cherry or Sunburst, though the palette was quickly expanded.

The twin pickups on this II model are not Fender-made units but were sourced from Rowe industries, makers of the DeArmond line. These early versions have adjustable poles and thin metal covers decorated with the Fender script logo. The trapeze tailpiece has the Fender "F" in the center; a floating tremolo option was also available. The bridge on this guitar is a Jazzmaster/Jaguar style adjustable unit adapted to a floating base, one of several ideas Fender tried.

The serial number on this guitar's F-marked neck plate is in a 500000 series initially used specifically for this line, though Fender soon enough harmonized the numbers with the rest of their models. These nominally out-of-sequence numbers lead some to date Coronados to the 1973-5 period, but they ceased production around 1969. While generally maligned as a failure in the 1960-70s, the Coronados -- especially this twin pickup, six-string II model -- have in later years gone on to be a better regarded instrument mating the well-loved Fender neck to a light and handy hollow body.

Priced at $319.50 on introduction, the Coronado II was competitive with the Gibson ES-330 and Rickenbacker Model 330, although it never really challenged either. The most striking feature of this particular instrument is a lovely transparent cherry lacquer finish that has hardly faded at all over 55 years. This is a good-playing and sounding guitar, far better than its original reputation suggests, and in its bright red glory a lovely instrument too behold.

This Coronado is simply the nicest we have seen, really pretty much approaching near mint ciondition. It appears hardly played, showing only light handling marks with all original finish and hardware. There are some very small scuffs and ding marks but really they don't come much cleaner than this 55 years on. The cherry finish is bright and rich with no fade at all, and the hardware still shines like LBJ was in office. The guitar plays and sounds as it should, as fine an example as we expect to see of this now-more-respected Fender oddity.

The guitar is housed in an original 1966 Victoria-made Fender Coronado case, also very clean, with one repair to the plastic handle. The catch is it appears sized for a Coronado bass or 12-string with an extended neck region. This guitar appears to have always been in this case (there are no marks from it ever housing any other instrument) so this was either a factory or dealer match up when new. Despite this possible mismatch this is a lovely time capsule of an instrument, a piece of Fender history and a better player's instrument than the critics of 1966 would ever admit! Excellent + Condition.
×