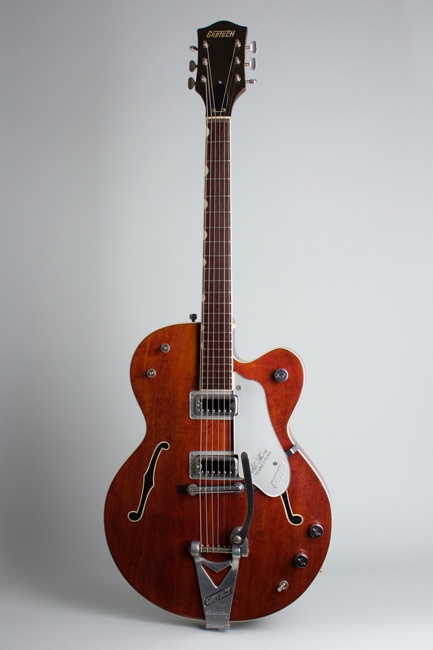 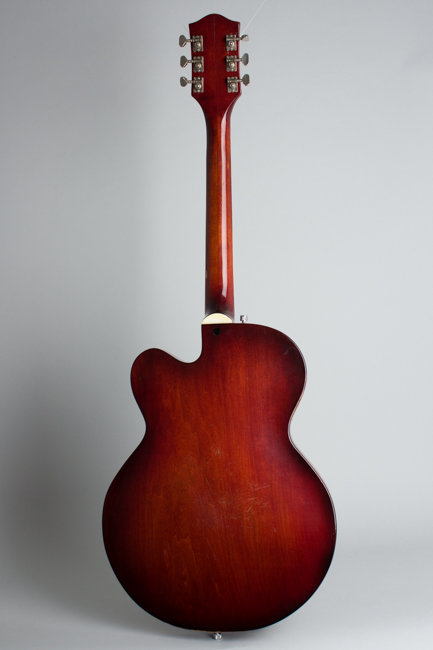 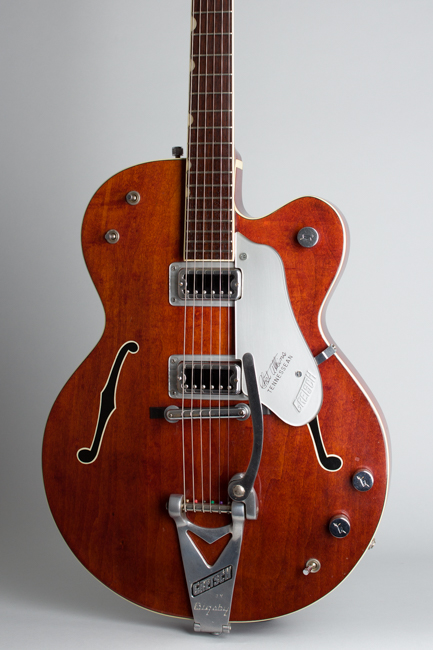 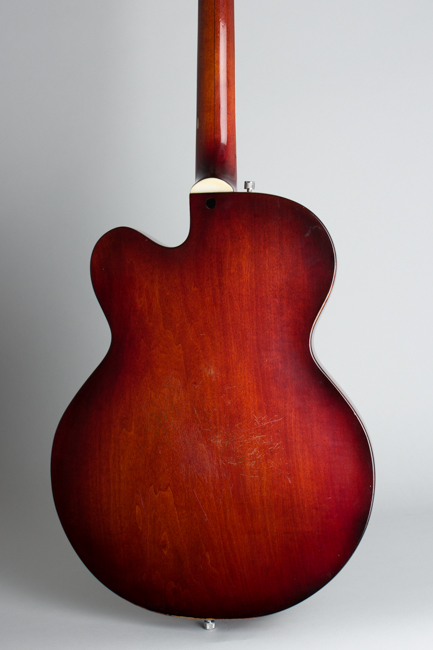 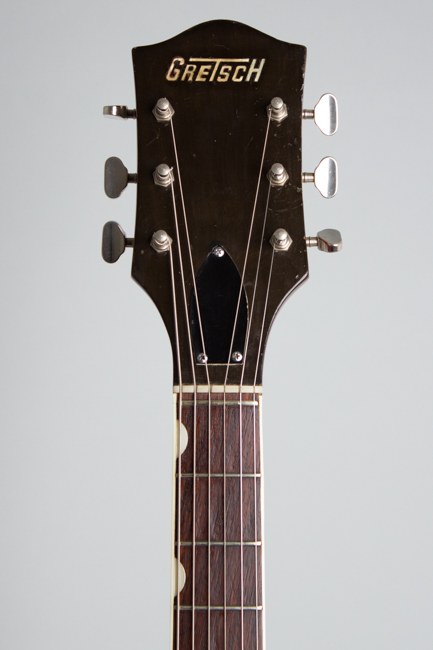 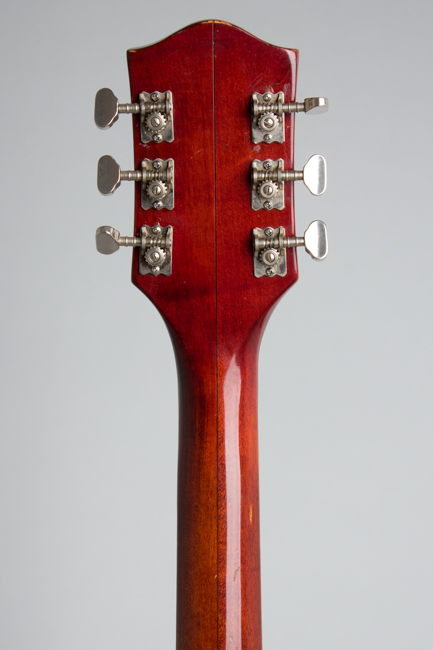 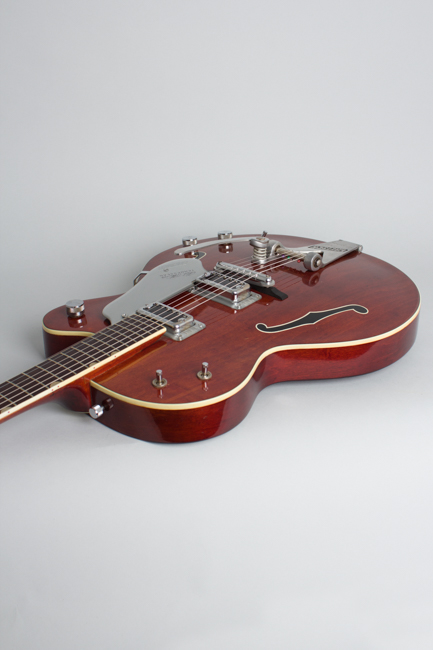 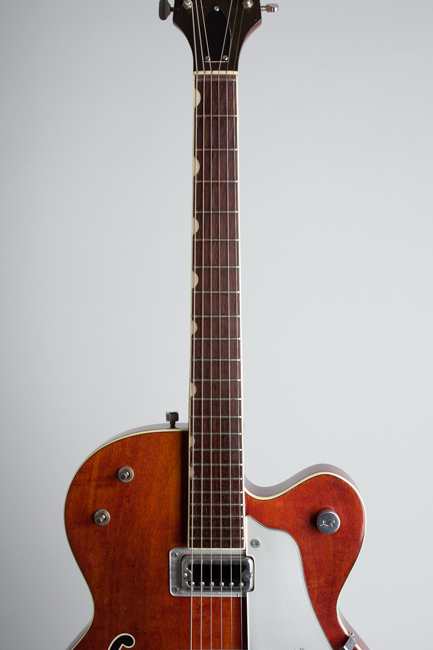 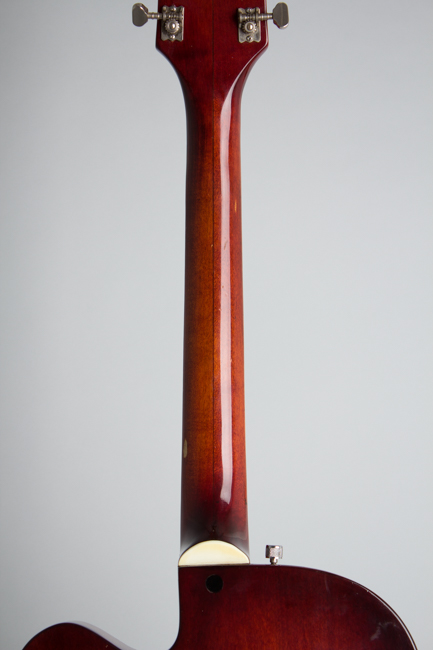 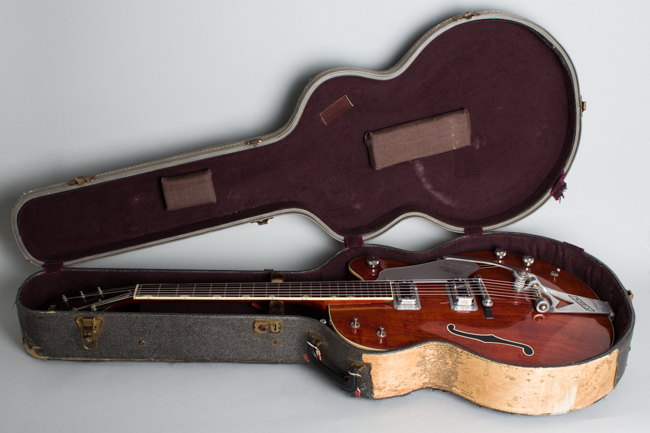 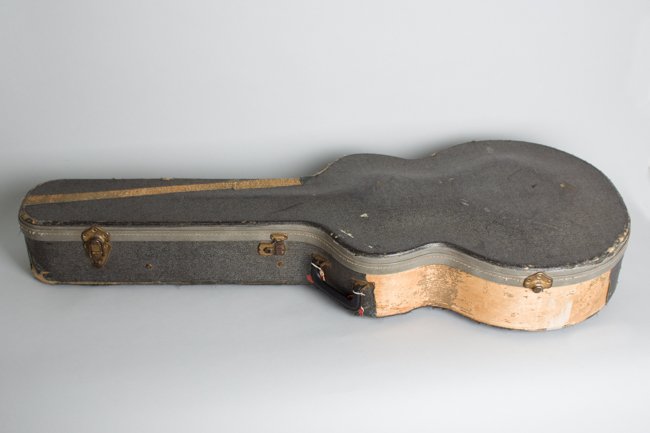 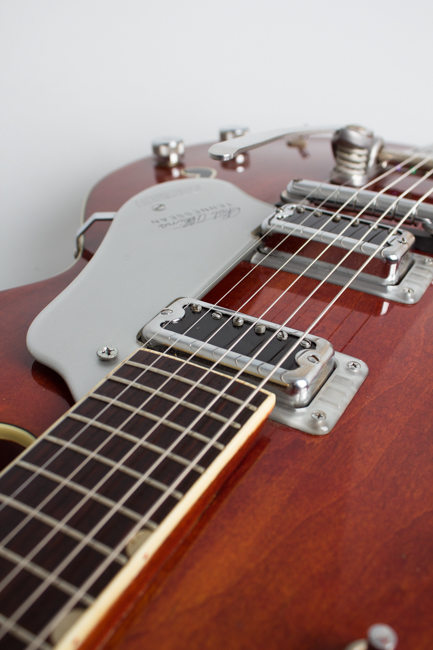 This is a very nice example of a "Beatle-era" Gretsch Model 6119 Tennessean with the fully hollow but enclosed "Electrotone" body, one of the Brooklyn company's most popular and now classic 1960s models. While it was the least expensive instrument in the Chet Atkins signature line, by the standards of the day the Tennessean was still a relatively upscale guitar. Like all Atkins models it is fitted with a "Gretsch by Bigsby" vibrato, one of Chet's requirements.

The top of the laminated maple body is single bound, the back unbound. The guitar is finished in a dark mahogany stain overall, something Chet himself much preferred to the "gaudy" orange of his original signature model, the 6120. The laminated maple neck has a bound rosewood fingerboard with a zero fret (another Chet requirement) and the half-moon "Neo-Classic" inlay pattern Gretsch used almost exclusively at the time.

The 6119 uses two single-coil Hi-Lo'Tron pickups in place of the double-coil Filter'Tron units used on the higher-end 6120 and Country Gentleman. This gives the guitar a somewhat brighter snappier tone than the other Atkins models. This example features stenciled-on "f-holes" with a white "bound" border; the earliest all-black version proved pretty inconspicuous. Earlier Tennesseans like this one lack the engraved headstock plaque added in late 1964. This 6119 has nearly all the correct set of features for "Beatle guitar" status, matching the 1963 model George Harrison used extensively in 1964-5 except for the tuning pegs. Instead of openback Waverly units it carries Dutch-made VanGent tuners, seen only in this 1964-65 period. it seems at the height of the guitar boom there was a domestic tuning peg supply shortage, as these appear on several American makers' guitars right at that time, along with cheaper Japanese machines.

The 6119 remained the only traditional single-cutaway guitar in the Chet Atkins line, both the Country Gentleman and 6120 having become double-cutaways at the time. The Tennessean's retail price was the not inconsiderable sum of $350.00 in 1962. Despite this the model became a best seller, one of the more popular guitars of the era with both professionals and teen garage band players. This particular Tennessean has an excellent neck angle, often a sore point of the model. Production of all Gretsch guitars and particularly the Tennessean went way up in the Beatle-saturated world of 1964-67, and the company's quality control team was often overwhelmed.

Many major 1960s artists made extensive use of this popular model, including as noted George Harrison, who acquired a Tennessean in late 1963 and used it notably in the film "HELP!" and as the featured guitar throughout the Beatles' 1965 world tours. David Crosby of The Byrds played one in 1965-6; Gerry Marsden (Gerry and the Pacemakers) toured and recorded extensively in 1963-4 with a slightly earlier Tennessean. The Animals' Hilton Valentine recorded all the band's early material including "House of the Rising Sun" with this same Gretsch model. The sound is brighter than many other 1960s hollowbodies, due to the combination of single-coil pickups and thin body but with plenty of depth when required. This is simply a classic 1960s Gretsch with a peerless "Beat Group" pedigree!

This guitar remains in nicely original condition overall, showing only some light general wear but none of the dreaded Gretsch binding rot that plagues many of their vintage instruments these days. There is one tiny split in the inset block on the treble side of the neck heel and that's it; all the other celluloid is intact and even the heelcap is perfectly solid. The finish overall has some small dings, dents and scrapes but no large areas of wear. The neck angle is excellent with a good break angle for the strings off the Bigsby; the guitar has never had or needed a neck re-set.

Nearly all the hardware on the guitar is original with only some light wear. There is belt buckle scuffing into the back finish, but nothing too severe. Two of the VanGent tuners must have been changed out at some point but are now restored with the exact matching original machines, leaving only a small filled screw hole above as evidence. The bushings are all original and nothing else was altered. The screw securing the pickguard bracket is replaced, everything else appears as it left Brooklyn in mid-1964. The pickguard itself is original and has no cracks, which can be hard to find on these. There are small cracks on the corners of the pickup rings, again a very common condition.

The original small frets show some light wear, but nothing that impedes play. The neck is nice and straight and this is one of the nicest-playing Tennesseans we have had, despite being made just as production was starting to ramp up for the "Beatle boom" that left Gretsch struggling to fill orders. Overall this is a very nice and fine-playing "Beat Group" era Gretsch, complete with the original HSC which is quite well worn with some covering missing but still solid and functional. Overall Excellent Condition.
×