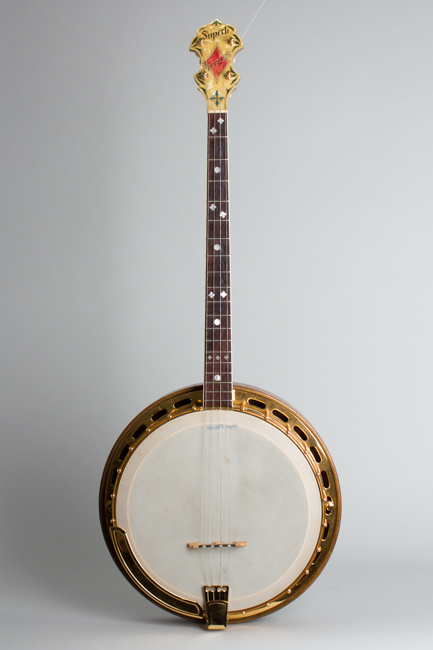 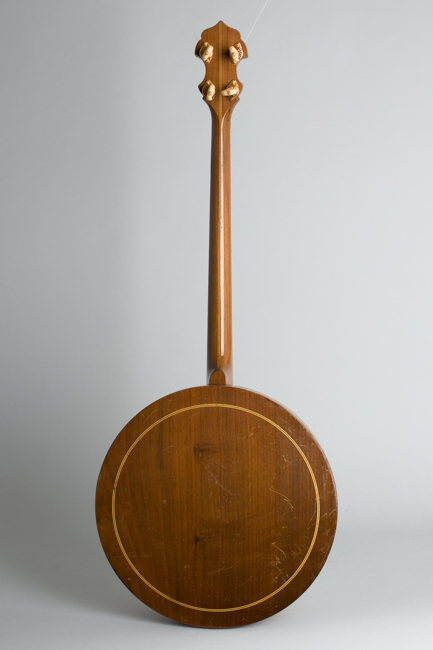 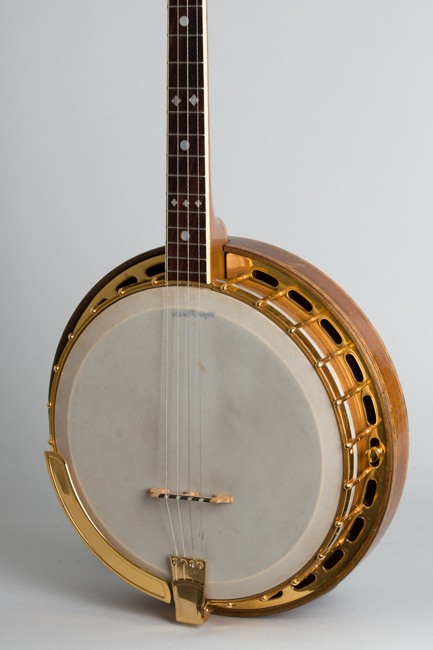 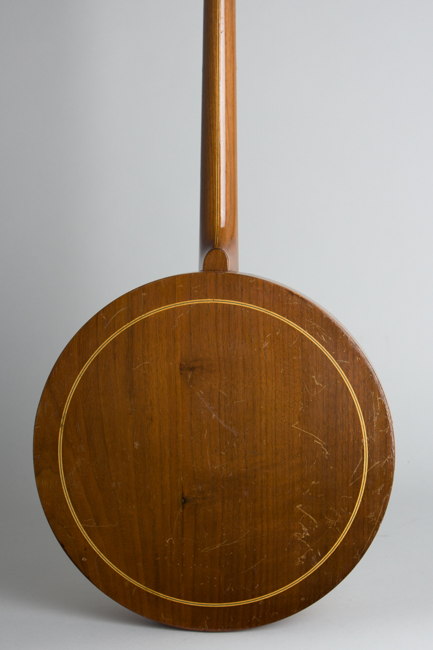 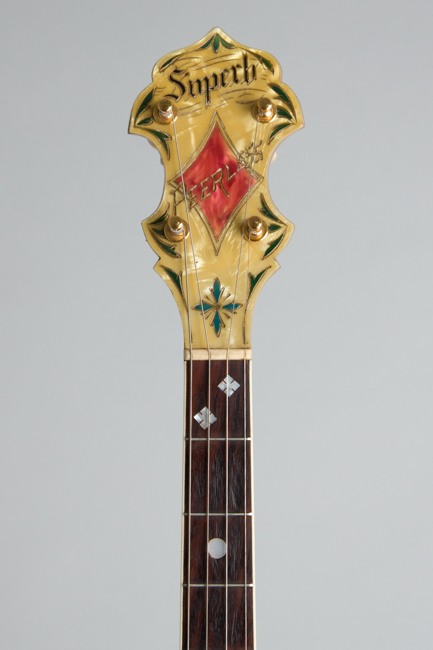 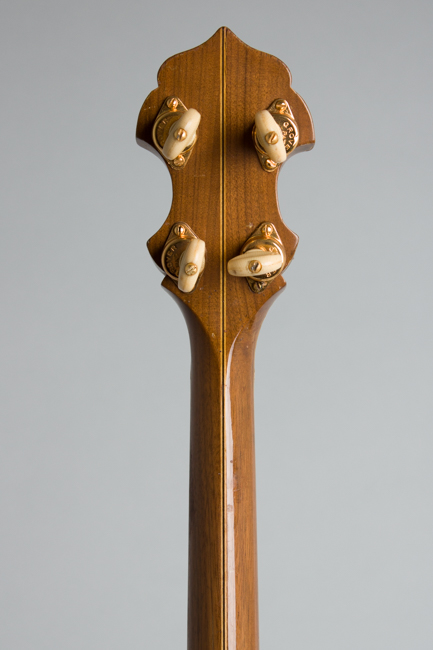 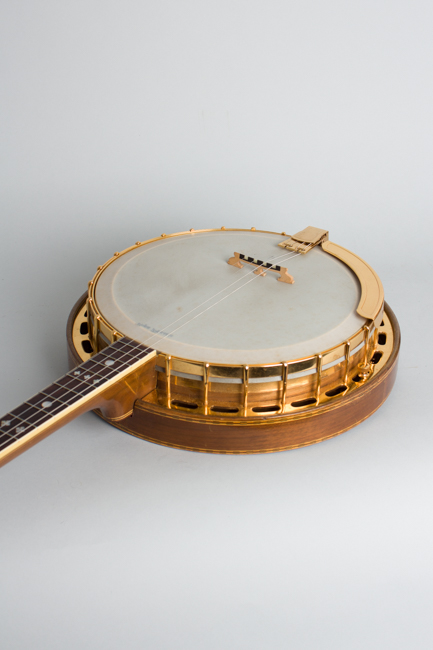 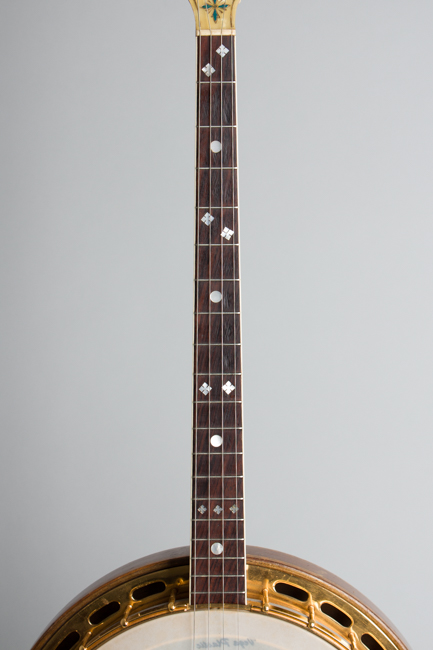 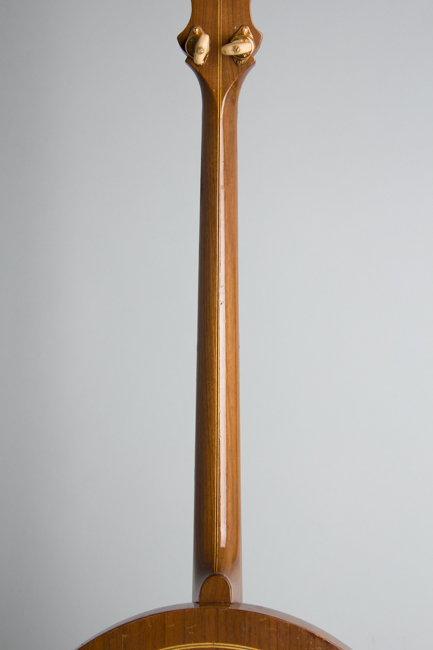 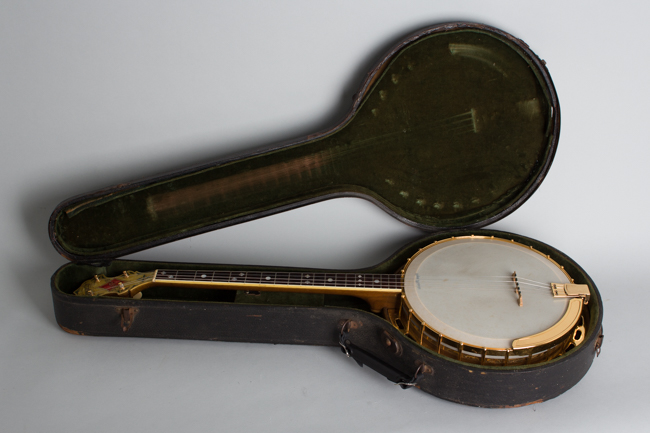 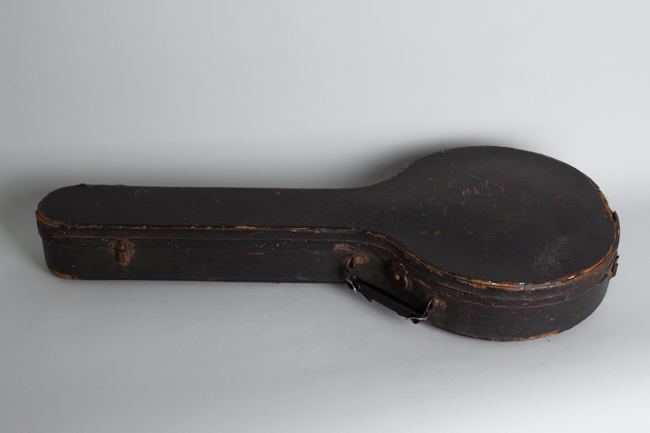 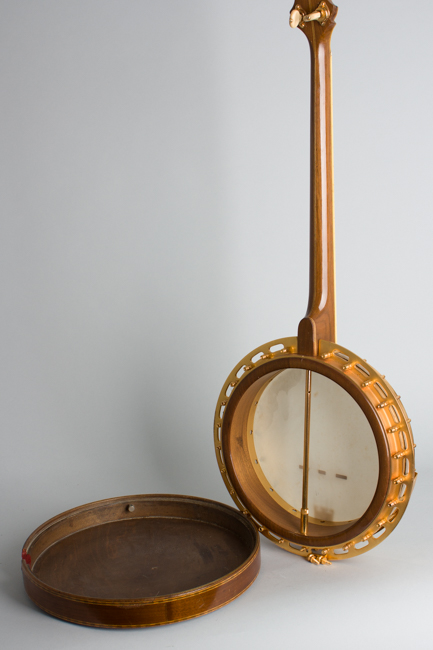 This charming and relatively flashy tenor banjo is a version of Epiphone's top "popular priced" model, sold under the "Superb" brand but essentially the same instrument. In the mid-1920's as New York's "House of Stathopoulo" was transitioning to "Epiphone Inc" some instruments used this "Superb" branding, but the banjo is still a full-blood Epiphone! This one has later gold plating added, making it even fancier than it was originally.

Epiphone's 1920's catalogs show the Peerless priced an even $100 complete with case in the late 1920s. That was still quite a bit of money around 1925-6; a pearl-topped Martin 00-42 could be had for $110! It is built of attractive American walnut, with colored wood marquetry rings on the resonator edges and multiple holly wood laminations. This is set off with the heavily gold plated hardware and a bound, pearl dot-and-diamond inlaid rosewood fingerboard. The headstock is faced in etched and painted Pearloid with an incised "Superb" logo and "Peerless" banner.

Compared to Epiphone's more expensive "Recording Model" banjos the Peerless has a simpler tone ring, but is still of fairly massive archtop construction. "...a patented tone chamber is formed by means of a special tone ring that gives the Peerless a rich, vibrant and musical tone quality" was the catalog description. The rim, neck, and resonator are basically similar to the professional models, with a heavy single co-ordinator rod and one-piece flange. The tuners are the same "tabbed" geared Grover pegs as Gibson used at the time, the tailpiece a Waverly extension style with a hinged coverplate.

The 1928 Epiphone catalog claimed this model "Gives rare value for your money...can be played in any organization without apology". They weren't bragging either -- this Peerless easily holds its own both in sound and construction quality with many of the more expensive tenor banjos of this opulent era. While not as fancy as many high grade models from Epiphone and their competitors, this banjo is a fully professional instrument far superior to most "budget" tenors of the 1920s.

Overall this is a very clean and original banjo, altered only with a high class gold-plating job on all the metal parts and a 1960s Vega plastic head. Overall it shows just some average wear to show for 90+ years on the planet. The finish has dings, dents and scrapes mostly to the resonator sides and back. The original frets do not show much wear, the fingerboard has some minor divoting but nothing that affects playability. The plating is very well done and despite being decades old shows only light tarnish.

All the hardware is original; the only change besides the added gold from the 1920s setup is the plastic head. This is a fine playing and quite powerful-sounding tenor, substantial-feeling but not as heavy as the top-line Epiphones that were priced above it at the time. This is a great find for the working or serious student banjoist; really a pro-grade tenor banjo at a reasonable price, complete in an original HSC that is battered with a lot of old repairs but still functional. Overall Excellent Condition.
×