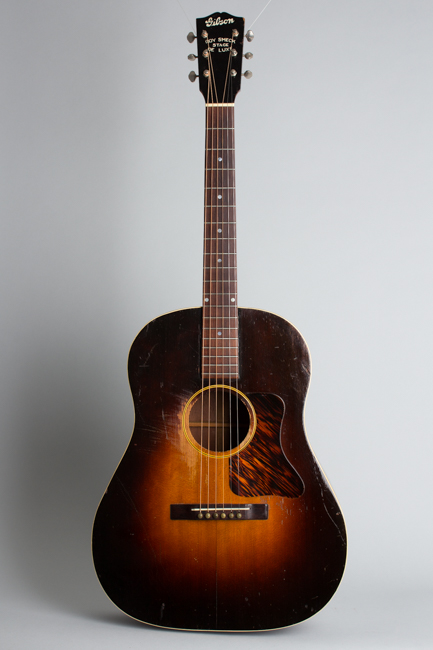 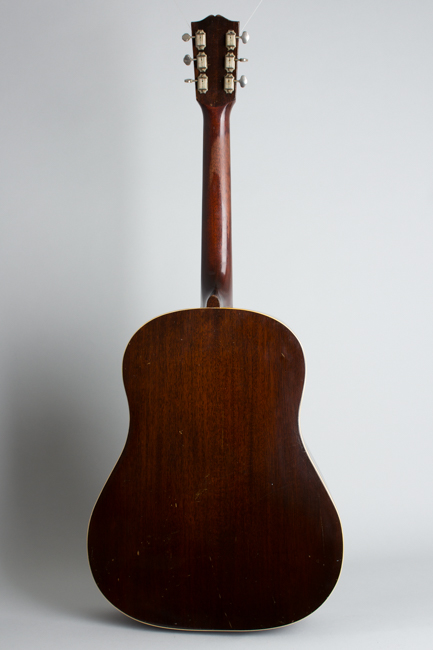 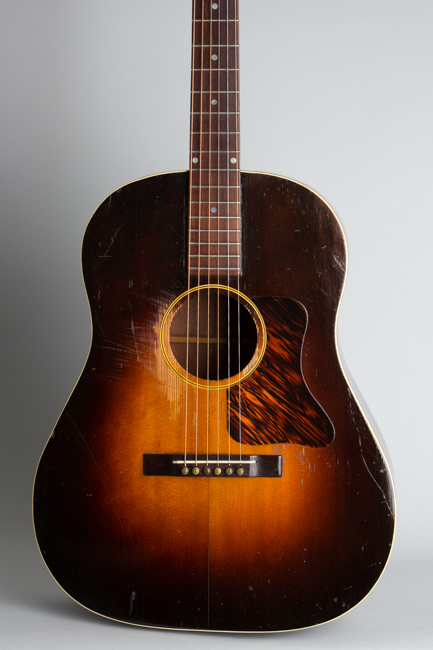 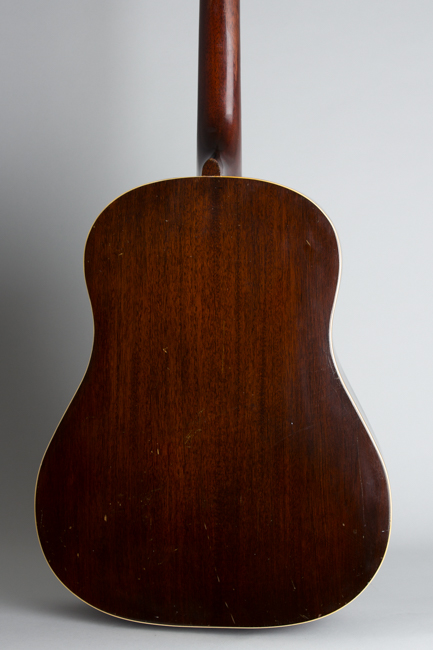 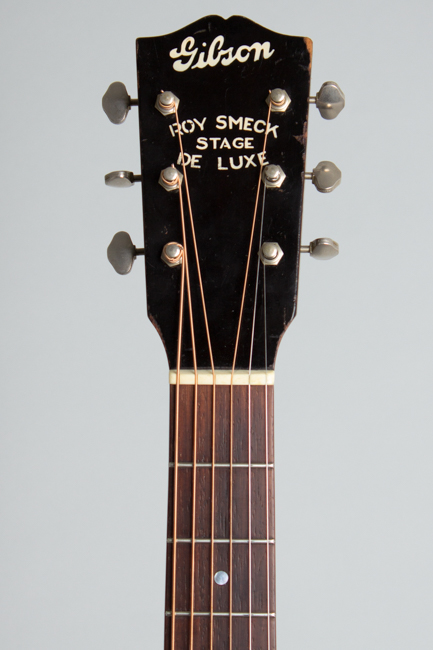 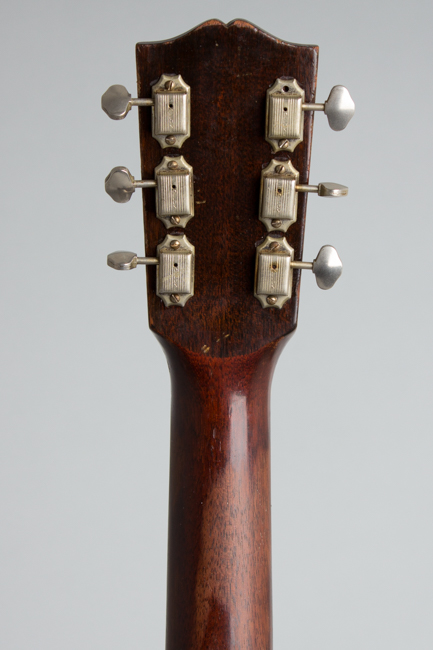 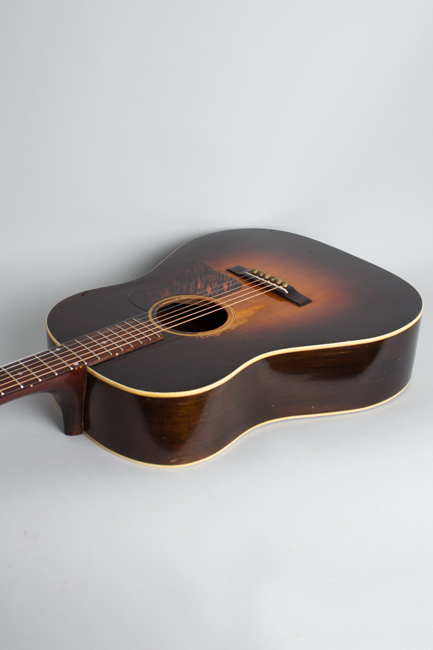 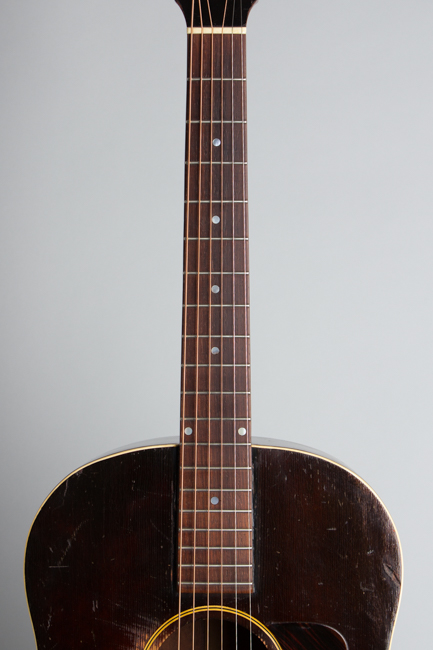 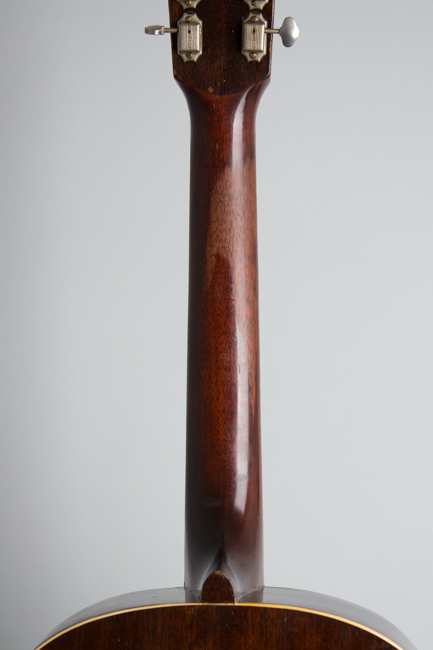 In 1934 Gibson introduced a new large-body acoustic Hawaiian guitar endorsed by Roy Smeck "The Wizard of the Strings" in two versions. This mahogany "Stage Deluxe" was the more basic model, with the extremely rare rosewood-bodied "Radio Grande" as the high-end version. This early 1935 Stage Deluxe is essentially a 12-fret version of the contemporary Jumbo, the primary difference being the shorter neck with (originally) a very wide fingerboard. As it was a Hawaiian instrument, there was no adjustable truss rod fitted. Like most of these this example has been converted for regular Spanish play and makes in exceptionally fine flat top for either style.

The originally $50 Stage Deluxe was slightly less fancy than the $60 Jumbo model, with a silkscreen headstock logo and plastic-button strip tuners. It shares the 16" wide single-bound mahogany body with a lush dark sunburst top, but was not 'bursted" on the back and sides as the Jumbo was. Gibson built no other 12-fret slope-shoulder Jumbo guitars besides the Smeck models; this unusual combination of features has long been prized for its uniquely deep powerful sound. The model is a unique pre-war Gibson flat top and has been a longtime favorite of several discerning players including Norman Blake and especially Jackson Browne.

This originally Hawaiian style guitar has had a fairly elaborate and well done conversion to make it suitable for standard play. The neck has been reset and thinned considerably to a 1 3/4" nut width from the original over 2" size. The fingerboard has been slimmed all along its length, making for a much more conventional feeling guitar then many such conversions. The neck profile is now a medium-deep "D" which is comfortable if not exactly reminiscent of most typical vintage Gibson designs.

The original bridge and small maple bridgeplate are intact, the holes for the original screws by the pins have been plugged on the top but not underneath. The guitar has excellent fretwork, with wire just slightly larger than period spec would be.
The back of the neck has a thin and comfortable finish, partially worn through to the wood. The tuners fitted are a more modern vintage-style crossbreed, enclosed Kluson deluxe style but with Grover Sta-tite style "butterbean" buttons.

There are some heavy dings and areas of pickwear to the top, with general wear overall but the top carries the heaviest wear.
The top center seam has been resealed near the back edge and there are small incipient grain splits sealed up where the old edges of the fingerboard once lay. The sides show several small repaired grain splits at the turn of each lower bout, neatly sealed but visible. There are a couple of small grain cracks to the back and one solidly sealed split through the endblock.

Overall this is a great playing and sounding Stage Deluxe, with some wear overall but no playability issues. It offers a huge and powerful sound, and is very responsive for a jumbo guitar. While altered further from the original feel than some such conversions is a correspondingly more comfortable instrument for most players to handle than Smecks retaining the original hugely chunky neck width and profile. Overall Very Good + Condition.
×