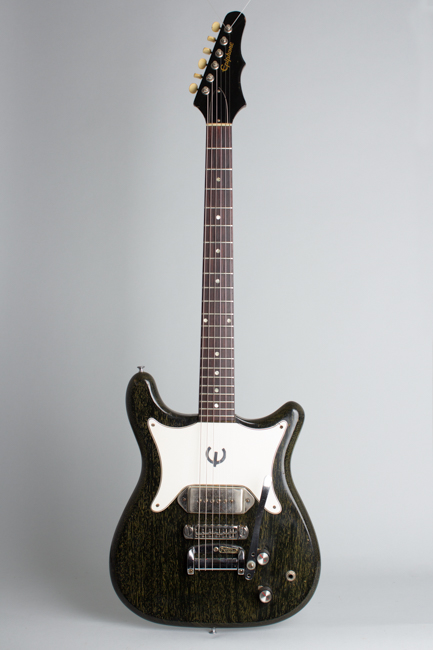 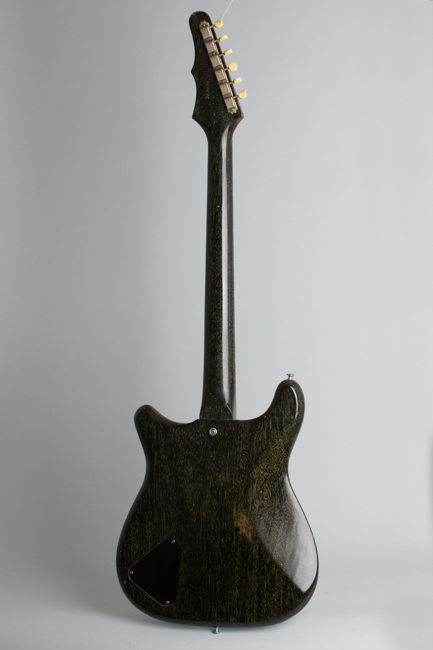 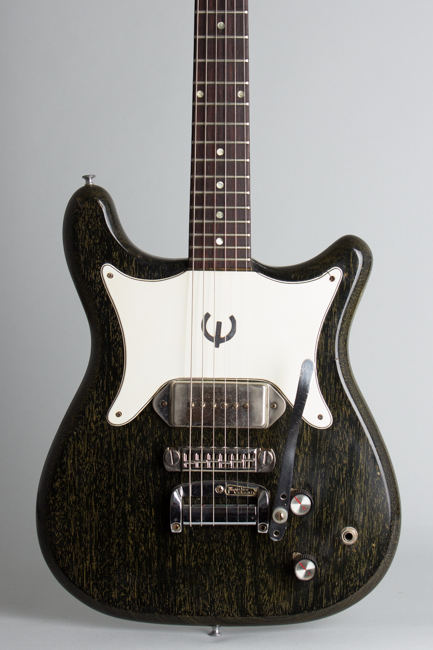 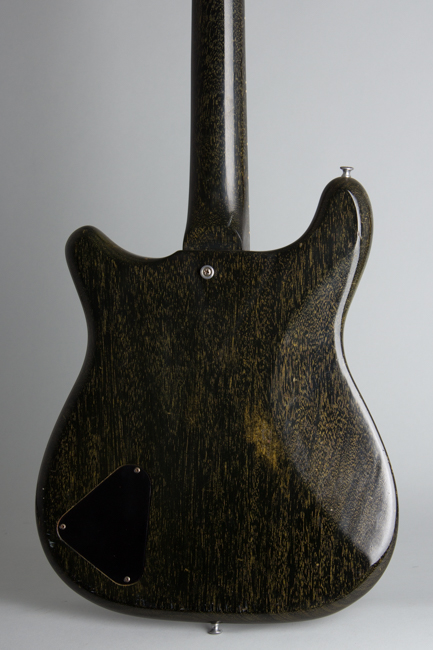 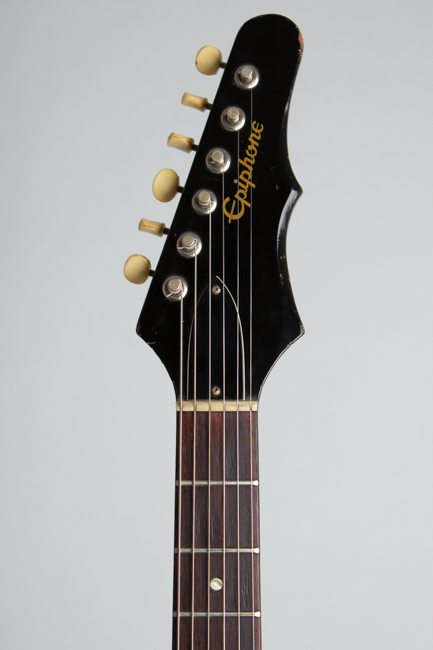 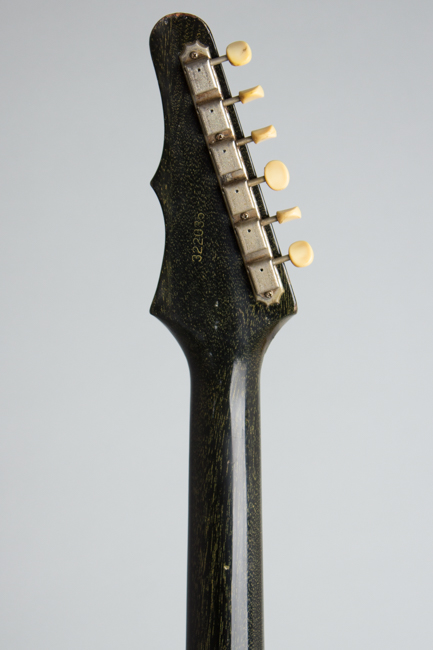 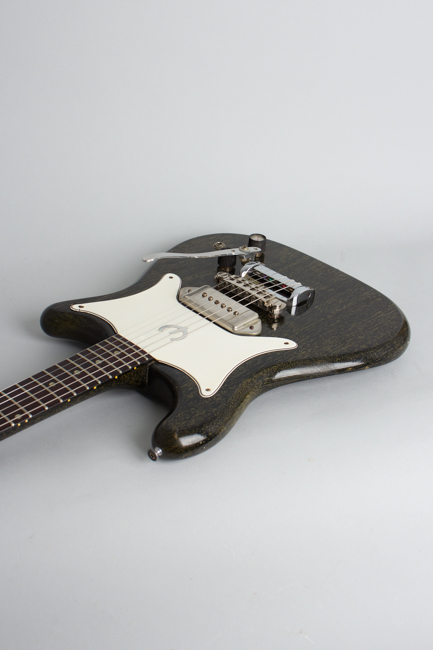 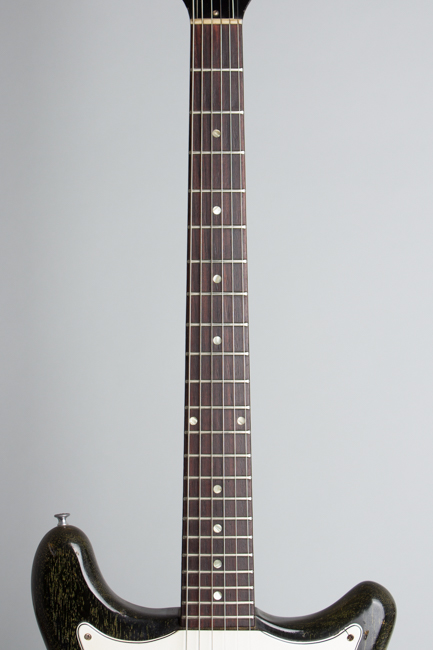 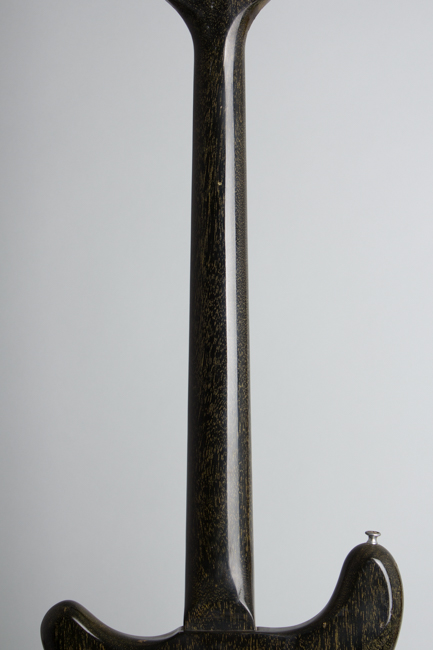 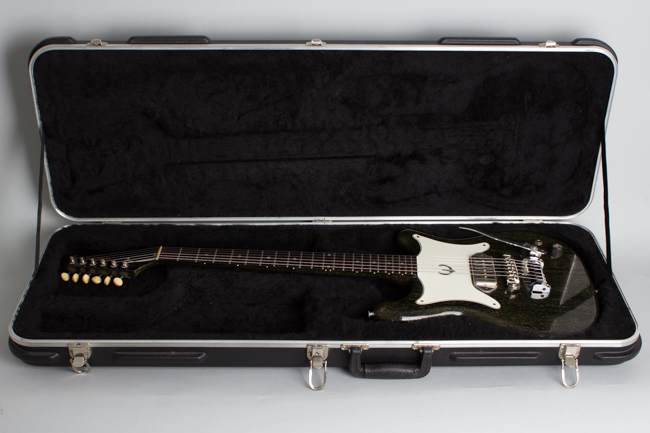 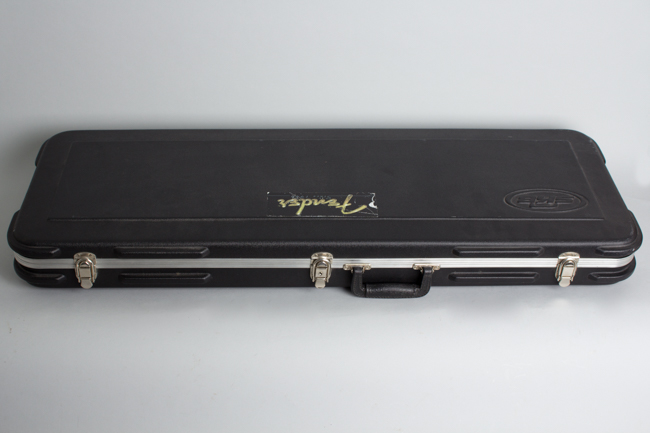 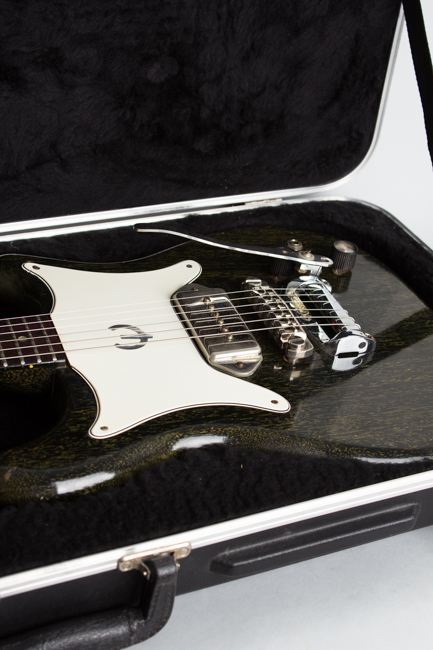 The Coronet is the Epiphone equivalent to Gibson's SG Junior, a somewhat unexploited treasure in the Kalamazoo-made fold. With the sonic characteristics of the Junior on a slightly more Fender-like body, the Coronet is a very comfortable, easy handling and powerful sounding little guitar. This second-generation example features the rare "Silver Fox" finish, actually a sort of greenish-black tinged mahogany with a lighter grain filler. Why it was dubbed "Silver Fox" is anyone's guess. This livery was a catalog option, but in practice was only infrequently ordered as examples are rarely seen compared to the common standard cherry version.

The single pickup is the standard single-coil P-90, still under the older-style nickel cover. The Epiphone vibrato is chrome plated, a typical mix for 1965. The Kluson Deluxe tuners on the single-sided headstock are the integral strip style with plastic buttons. The neck is slimmer at the nut than earlier models but still has some meat to it compared to many later examples. These asymmetrical-bodied Epiphone solids were phased in in 1963, replacing the original bulkier symmetrical models.

In mid-1965 the company stopped charging extra for a vibrato on this model, listing it as a standard fitting for the $175 price; before that it added $27.50! 480 vibrato equipped models are recorded as having been shipped that peak guitar boom year, alongside 337 without it. This is a very small number compared to the over 3500 SG Juniors the Kalamazoo factory sent out the same year, and only a small proportion sported this finish. This is a neat and very functional 1960's Epiphone solidbody, cool looking, great playing and offering the typical rampaging tone of these light-bodied mahogany P-90 guitars.

This is a very nice example of this Epiphone rarity, played but not abused and dialed in for maximum fun. The finish is fairly clean overall with some dings, dents and scrapes, most notably on the back. The rare "Silver Fox" finish retains good color and is nicely unfaded. There is a small shrinkage crack at the lower front corner of the pickguard but nothing is broken off. The neck joint is very solid and there are no cracks or breaks on the instrument.

The guitar remains original except for being set up with a modern TonePros style intonatable locked bridge, which works well with the vibrola and makes the guitar more suitable for modern playing with an unwound G string. Nothing is modified and an original piece could be re-installed in a couple of minutes if desired. The vibrato handle is intact; many of them have been removed and lost over the years.

The neck angle on this guitar is very good (which is not always the case with these) and the vibrato works quite well. The P-90 pickup has been shimmed up slightly to achieve more gain, again an easily reversible modification which can be un-done with no trace affects if desired. This gives more muscle to the sound, and makes this a real little screamer when cranked. Overall this is a lovely example of a fairly rare Epiphone Coronet variation. Overall Excellent Condition.
×