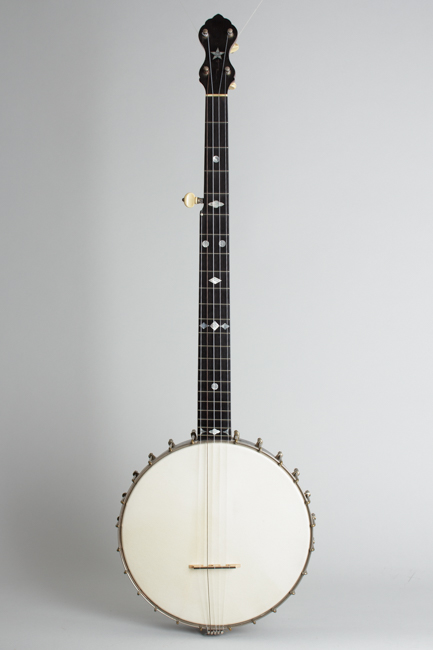 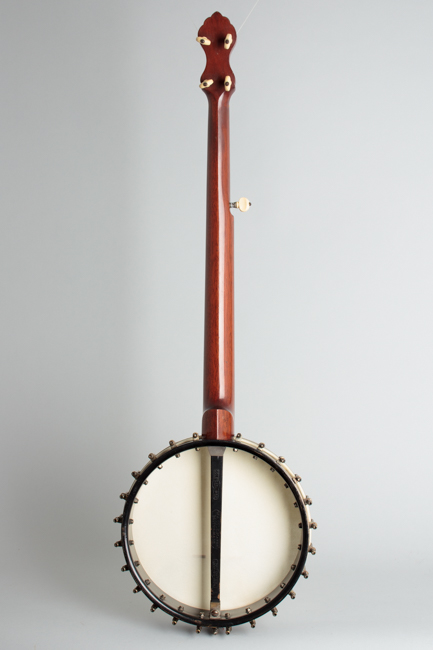 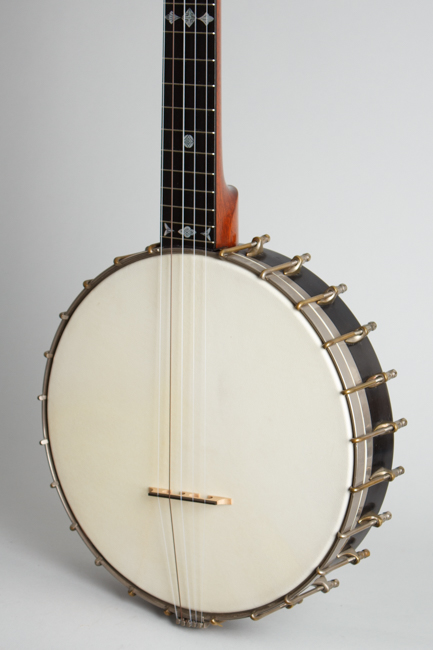 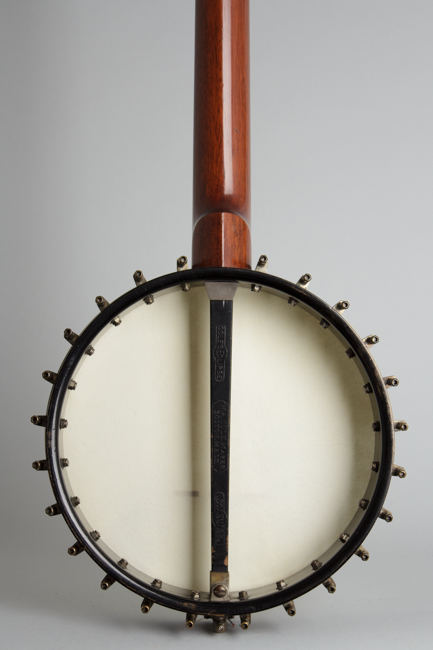 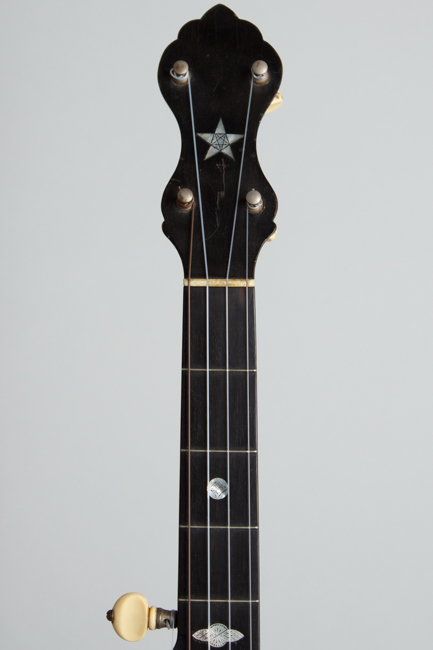 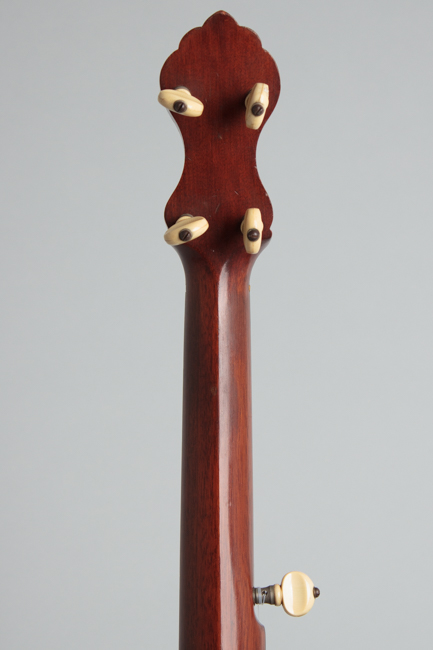 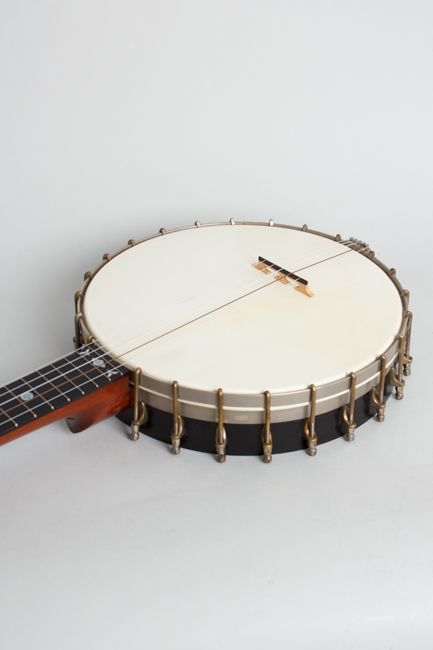 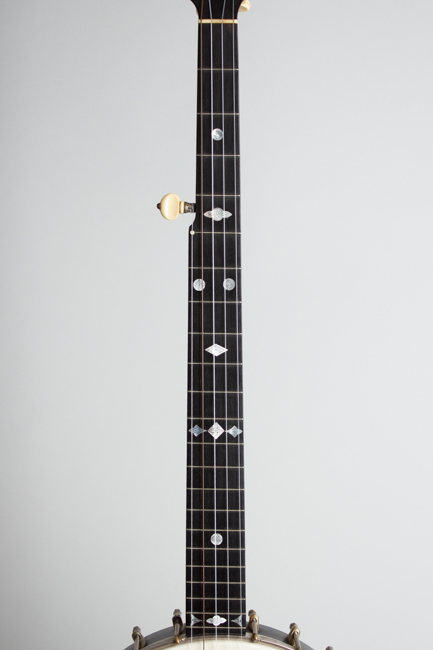 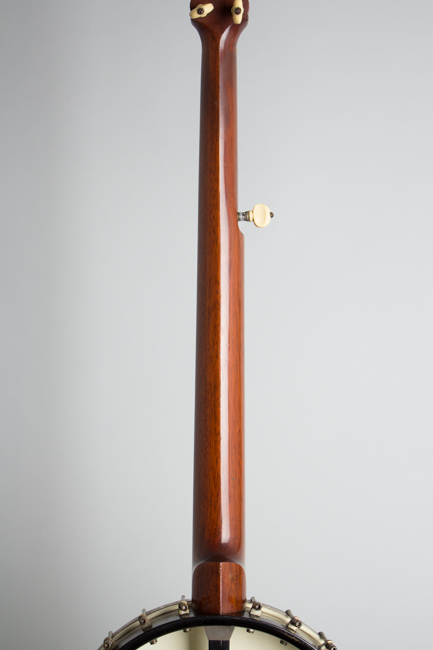 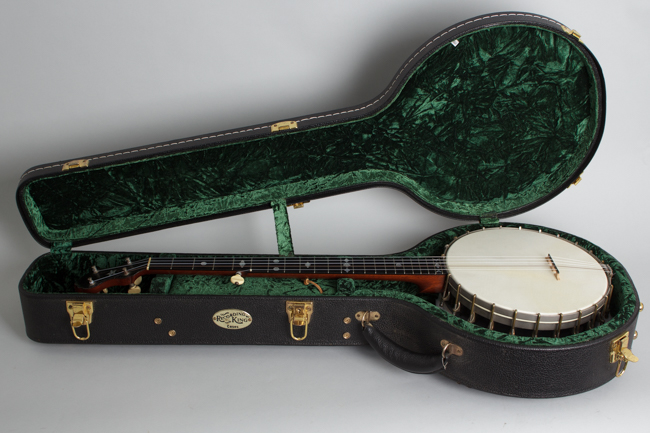 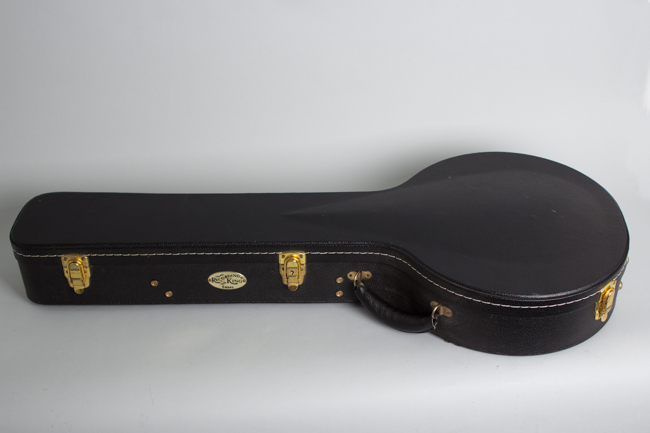 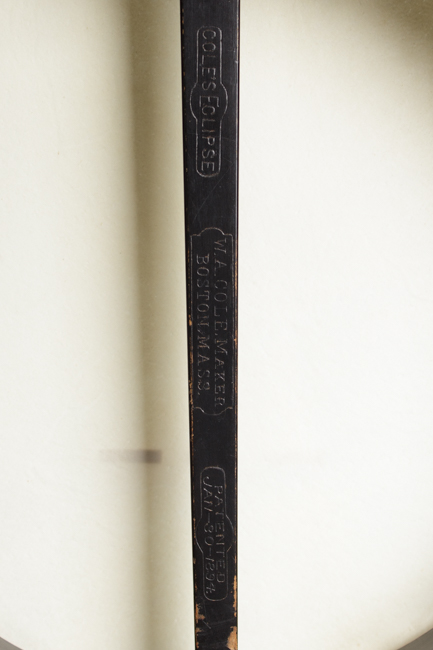 This is a superb original example of the Cole's Eclipse model 2500, similar to but not quite as fancy as the model just above it in the line: the famous Model 3000 with the iconic man-in-the-moon headstock inlay. The Model 2500 was a bit less expensive but is built with most of the same construction features and crafted to the same exacting standard. While the Cole's Eclipse models are generally thought of as 1890s instruments, they were built (or at least still sold) up into the early 1920's, the dawn of the Jazz Age. This is a later example, most likely built about 110 years ago but it remains little changed from the 1890s.

When W.A. Cole split from the Fairbanks & Cole company in 1890, he immediately launched his own banjo making operation across the street from his old partner! The instruments he created there rank among the most interesting and artistic banjos of the classic five-string era. The various Cole's Eclipse models are generally considered to be some of the finest 5-string open back banjos ever made, rivaling ex-partner Fairbanks' instruments in beauty and craftsmanship if not always in sound. They have a number of distinctive and unusual design and construction features and are always beautifully made.

The black finished laminated maple rim is fitted with Cole's Eclipse tone ring, a fairly simple sheathed design compared to the scalloped-base Fairbanks' "Electric" of the same era. This model has standard shoes on the rim instead of the more elaborate Teardrop shaped pieces used on higher end Eclipses. The unique "Boat Heel" mahogany neck and dowel are secured by the panted Cole's neck adjustor system. The tiny set screw on this later version is at the lower end, instead of the upper while the neck securing piece behind the heel lacks the mounting screw used earlier. The dowel itself is unchanged from earlier models, marked "Cole's Eclipse" "W.A.Cole Maker Boston Mass" and "Patented Jan-30-1894".

The only headstock inlay is a delicately engraved pearl star, executed with the distinctive Cole touch. The ebony fingerboard has varied shaped engraved pearl pieces executed in an extremely crisp manner typical of the work of Boston's artisans in the 1890's. The tailpiece is the original cammed No-Knot; the original friction tuners are still intact. This delightful and very playable historic banjo is set up with a high-grade skin head and Nylgut strings, a lovely example of the artistry one of the late 19th century's most elegant and distinctive builders.

This is a beautiful and completely unaltered original banjo including the ivoroid-button friction tuners, the No-knot tailpiece and all of the hooks and nuts. There is minor overall play and handling wear with some dings, dents and scratches to the finish and plating loss (mostly to the hooks) commensurate with 110+ years of use but overall for its era this is exceptionally well preserved. It is set up nicely with a genuine calf skin head and NylGut strings; the bridge is later but the setup is period correct for the instrument. This is a fine sounding and playing survivor from the golden age of Boston banjo making, one of the best preserved from this period we have ever seen. Overall Excellent Condition.
×