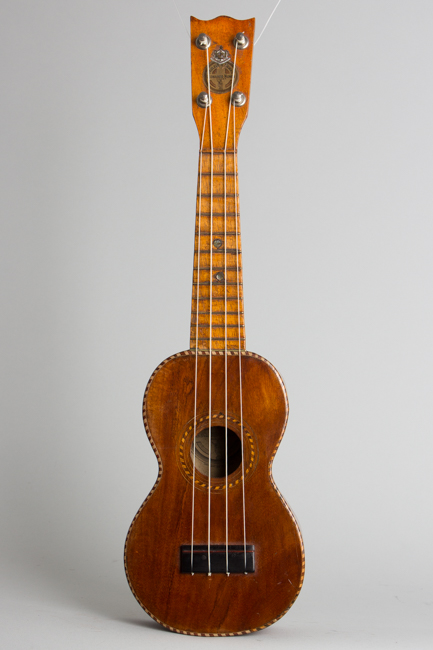 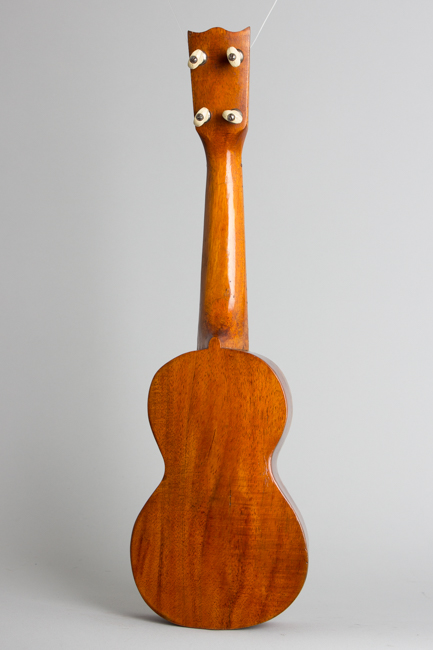 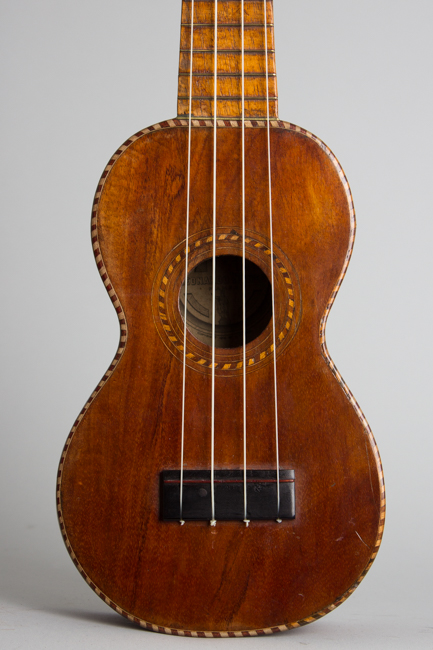 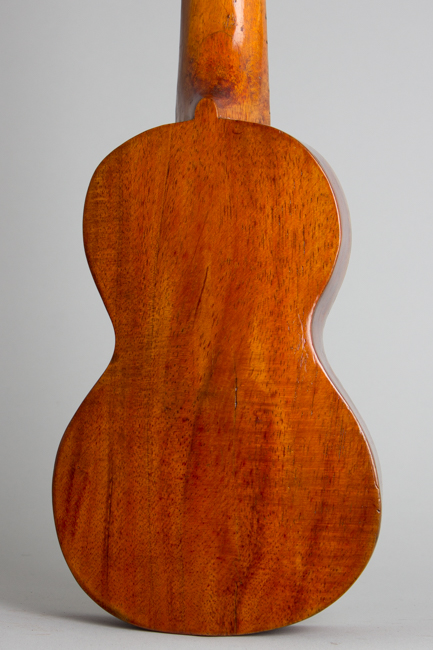 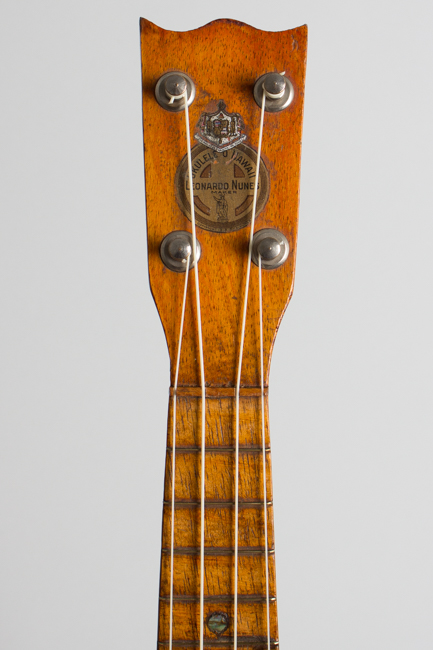 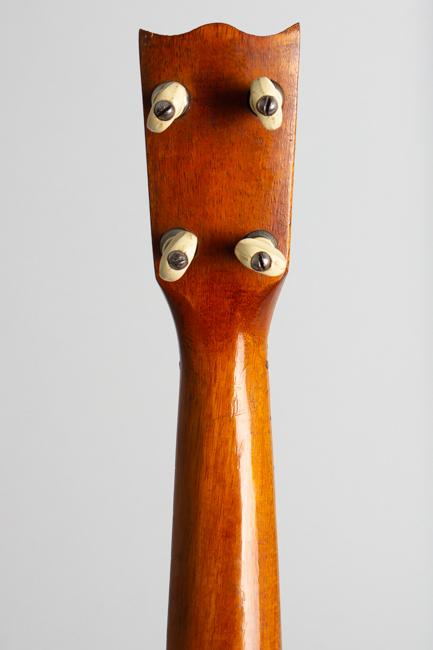 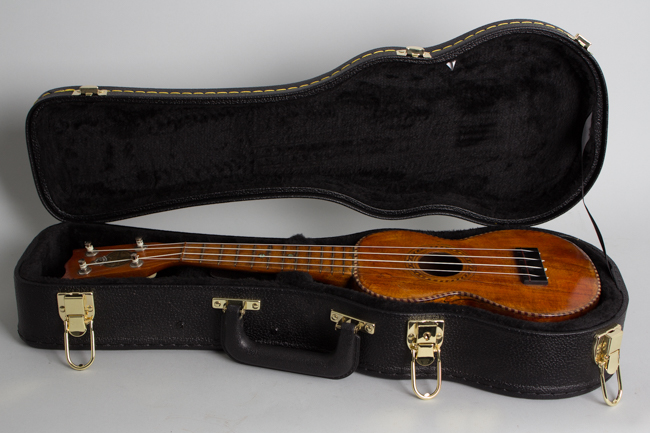 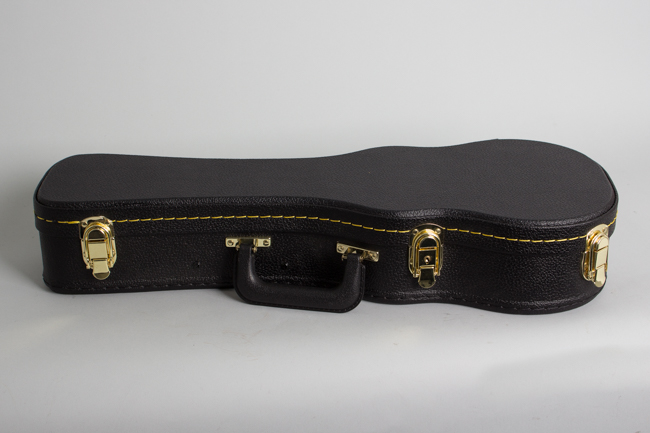 Leonardo Nunes was one of the better known native Hawaiian ukulele builders during the first period of the instrument's popularity from the early 1910s to just before the Depression. He was the son of Manuel Nunes, the Portuguese/Hawaiian maker who billed himself as "Inventor of the Ukulele" in the 1910s. Apparently tiring of working for his father, Leonardo left the Manuel Nunes firm and Hawaii in the mid-1910's to settle in Los Angeles, quickly setting up shop to build Ukuleles there. He produced instruments sold through a number of mostly west coast jobbers and music dealers branded Ukulele O Hawaii, although strictly speaking they were made on the mainland! Despite this territorial anomaly, his ukes retain a totally Hawaiian character, built in the original Iberian-influenced style using native Hawaiian koa wood.

This uke is a mid-line grade Leonardo Nunes creation, likely dating to the late 'teens or early 1920's. Like nearly all period Hawaiian style ukes the workmanship is relatively crude by continental (read: Martin) standards but the instrument has a wonderful feel and sound. The body and neck are made of amber-colored Hawaiian koa with some subtle grain patterns. The back is one piece pressed into a noticeable arch while the top has an almost diagonal grain pattern in places. The soundhole and body edge are ornamented with typical Hawaiian style wood marquetry. The paper L. Nunes label under the soundhole has a 1916 copyright date.

The one-piece neck is narrow at the nut but a bit deeper and rounder than the usual Hawaiian style, and very comfortable to play. The back of the pointed-tipped headstock is carved into an arch and the two fingerboard dots are greenish abalone, all L. Nunes trademarks. The distinctive Leonardo Nunes decal is on the headstock, which is equipped with four banjo-style friction pegs with white composite buttons.

Overall length is 20 7/8 in. (53 cm.), 6 1/8 in. (15.6 cm.) wide at lower bout, and 2 3/8 in. (6 cm.) in depth at side, taken at the end block. Scale length is 13 1/4 in. (337 mm.). Width of nut is 1 1/4 in. (32 mm.).
This 100+ year old uke survives in good playable condition, with some older repairs but nothing that detracts from its original character. The bridge is a very old replacement, made of ebony instead of Koa and likely deeper in profile than the original. There is a long repaired crack on the treble side (almost unavoidable on the roughly cured native koa wood ukes of this period) and there are a couple of small patched-in spots on the rim. What looks like a long crack on the back is actually a deep scratch, it does not go through to the inside.

The original varnish appears to have been French polished over on the sides and top but the rest remains original. These very lightly built instruments rarely have lasted 100 or so years without some sort of repair, often much cruder than what is seen here. This uke is strung with Nylgut strings and the sound is lovely, an instant trip back to the swaying palms of 1920s Honolulu, or Los Angeles, or as close as your Victrola could get you! Overall Very Good + Condition.
×