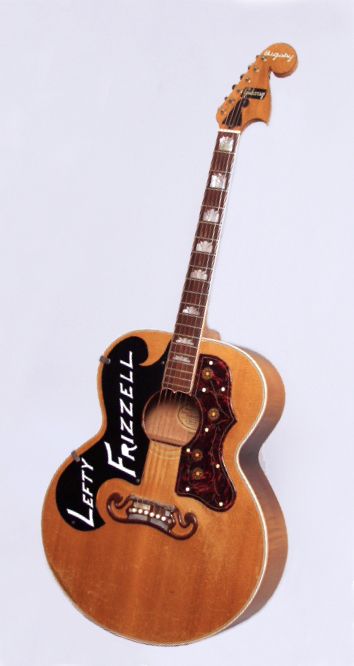 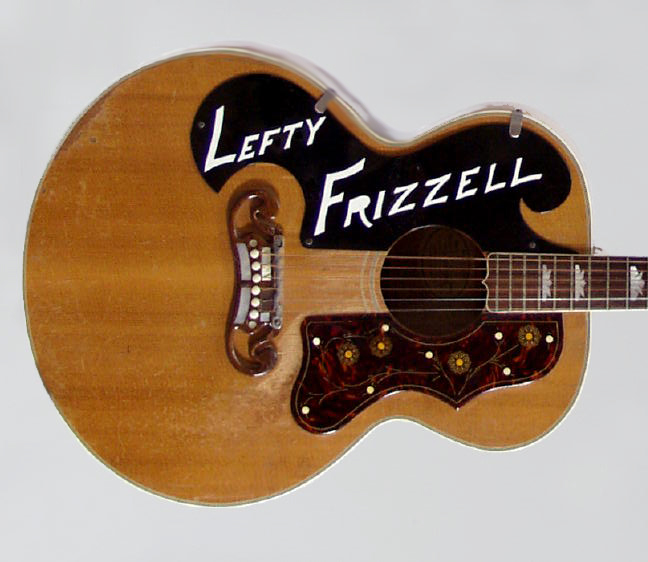 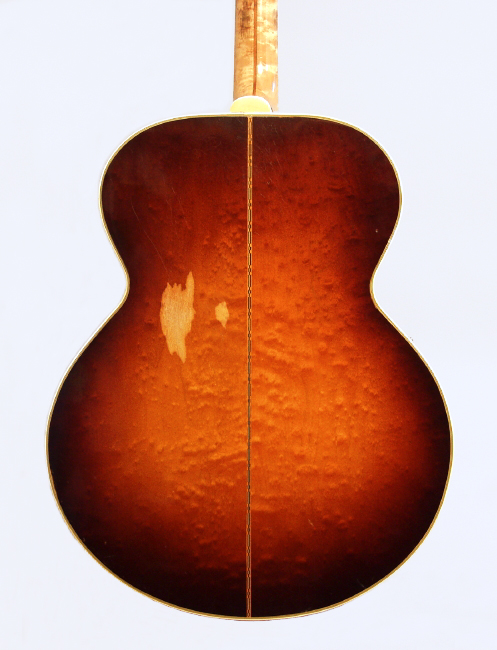 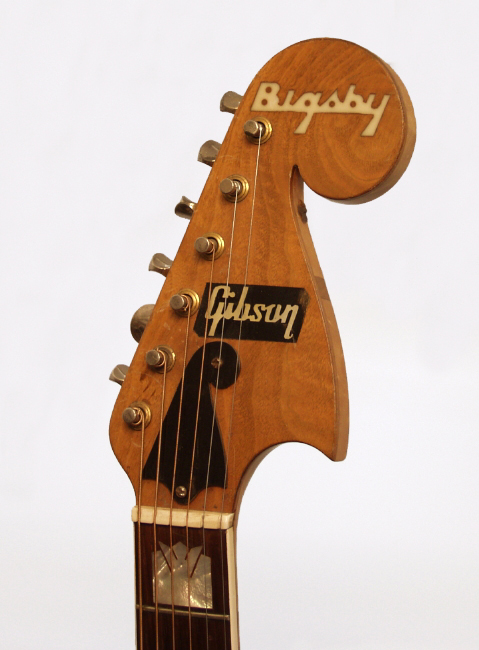 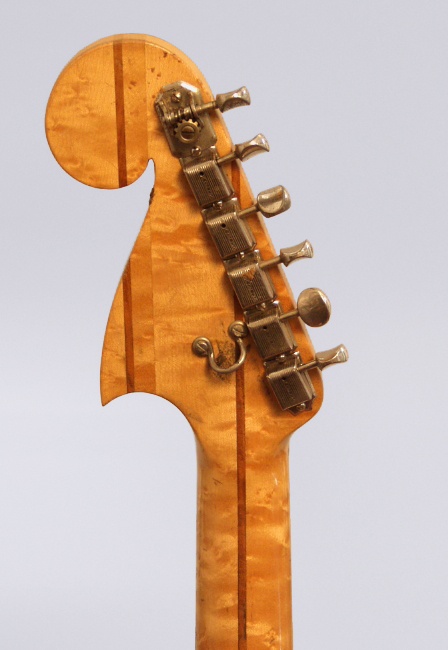 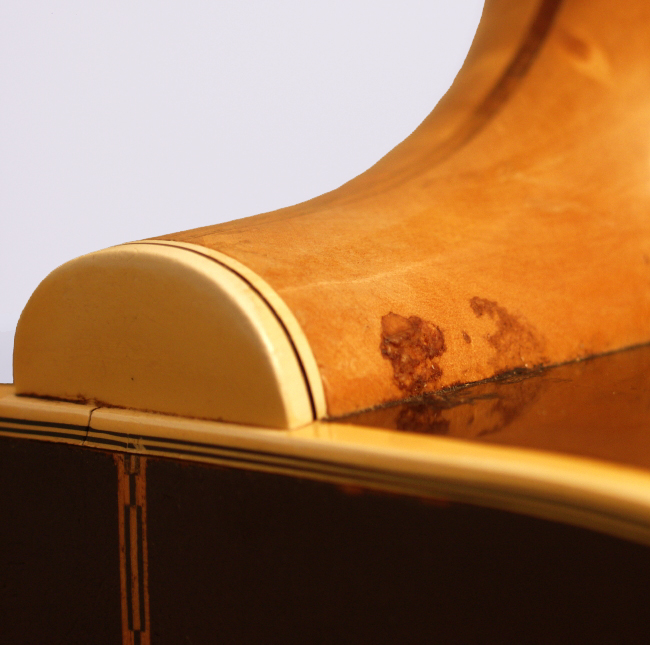 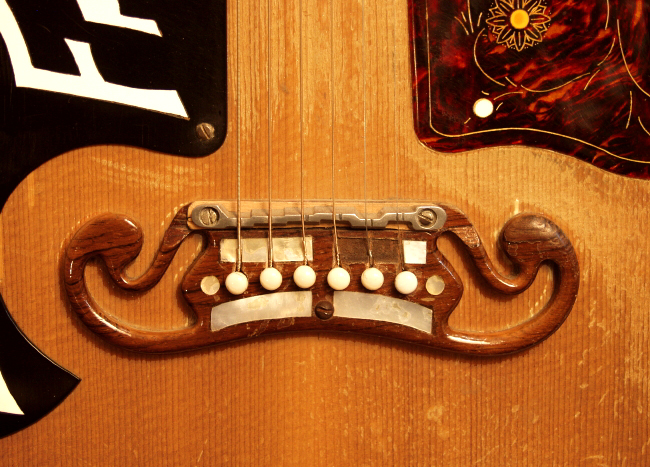 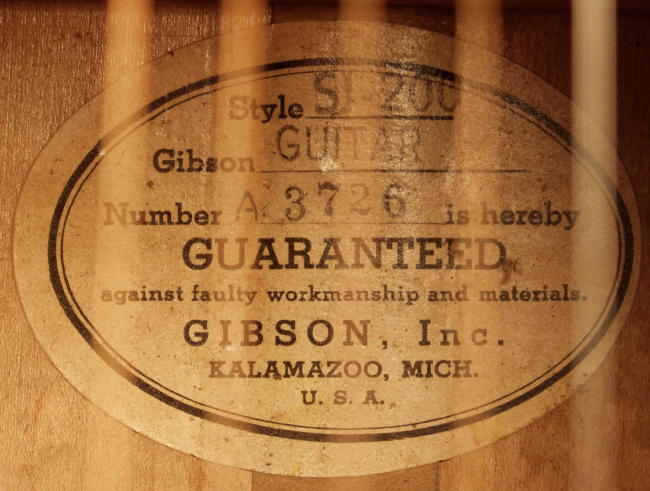 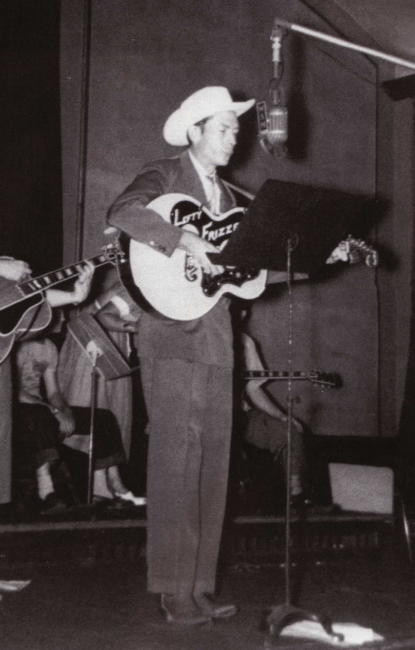 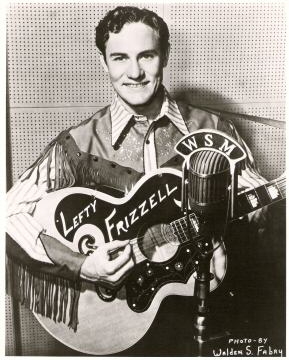 An important and historical instrument.
This item has been sold.
Item # 2928
Prices subject to change without notice.
Bigsby/Gibson Custom SJ-200 Model Flat Top Acoustic Guitar (1949), made in Kalamazoo, Michigan, natural top, sunburst back and sides finish, maple back, sides and neck, spruce top.

The signature instrument of one of country music's most legendary stars, this custom SJ-200 is perhaps the most striking and distinctive flat tops in American guitar history. Built by Gibson in late 1949, it was acquired by rising music star William Orville "Lefty" Frizzell in early 1951. Lefty soon had it customized and rebuilt by innovator Paul Bigsby. Today, many consider this guitar to be the Holy Grail of honky tonk music

Lefty Frizzell is undisputedly one of the most influential artists in country music. Echoes of his unique plaintive vocal style are still heard in many singers today, more than 30 years after his death. Along with Hank Williams Frizzell defined the post WW II Honky-Tonk sound; his singing and song writing set the standards of the genre and had a major impact on Merle Haggard, Willie Nelson, Dwight Yoakam among many others. The Frizzell style was sincere, intimate and haunting. He added slurs, twists and curves to his vocal lines that were previously unheard. Lefty was an original in more than his sound - he was an early exponent of the flashy stage outfits of the 1950’s and the first country singer to wear rhinestones on stage.

The guitar itself has had quite a history. When Hank Williams and Lefty toured together in the early 1950’s Hank often played Frizzell’s guitar on stage. Although Hank owned a number of top notch Martins he loved using Lefty’s flashy new guitar on stage. In 1951 a fourteen year old aspiring song writer by the name of Merle Haggard went to see his idol, Lefty Frizzell, perform at the Rainbow Gardens in Bakersfield, Ca. He and his friends went backstage and Merle sang a few songs. Lefty refused to go on stage unless Merle was allowed to open the concert with a short set. Frizzell also insisted that his young fan play this new Bigsby/Gibson guitar. Merle’s career began that night. "Merle was just crazy about Lefty," states Bonnie Owens, Merle's second wife. "It was Lefty who taught Merle the most about songwriting and stage presence." In a 2003 interview Haggard recalled, "When I was a teenager, Lefty got me onstage [at the Rainbow Garden in Bakersfield, California] and handed me that guitar. That is the first guitar I played on a professional stage."

William Orville Frizzell was born in 1928 in Corsicana, Texas, and grew up in Arkansas. He took an early interest in music and armed with a used $2 guitar learned every song of his hero and greatest influence, Jimmie Rogers. “Lefty” picked up his nickname after a series of schoolyard scraps. By age 12 he began years of singing on the radio and countless honky tonks, barn dances and parties. In July 1950 a demo of “If You’ve Got The Money Honey, I’ve Got The Time” recorded in Dallas reached Columbia Records. Frizzell quickly signed with the label and hits began to pile up. Between late 1950 and mid-1951 Frizzell held the country number one spot for 26 weeks having 4 songs at once in the top 10, a feat still unmatched. In April 1951 Frizzell toured with Hank Williams...reportedly the towns hit by the two honky-tonk kings were never the same. At Hank’s suggestion Lefty also appeared as a headliner on the Grand Ole Opry.

In early 1951, as royalties for his recent hit recordings began pouring in, Lefty Frizzell bought this guitar, a 1949 sunburst Gibson SJ-200, locally in Texas. The SJ-200 is called “King of the Flat Top Guitars” and has been the guitar of choice for many prominent artists including Elvis Presley, Emmylou Harris, Gene Autry, The Everly Brothers, Pete Townsend, Roy Rodgers, Eddy Arnold, Tex Ritter, Rev. Gary Davis, and countless others. No other flat top guitar makes a visual statement like an SJ (“Super Jumbo”) 200, which was originally designed for Hollywood Cowboys of the 1930’s.

In buying and playing this showy expensive instrument Lefty was telling the world he had arrived as a full-blown star. He was already wearing the ornate stage outfits created by Los Angeles “Rodeo Tailor” Nudie Cohen and soon had had his impressive new guitar personalized into an unmistakable showpiece by Nudie’s friend Paul (“P.A.”) Bigsby of Downey, California. As a newly-minted country headliner Lefty wanted the flashiest guitar possible and ordered a custom neck with Bigsby’s trademark futuristic headstock and extra large pickguard for the top inlaid with “Lefty Frizzell”. It was a design visible from the back of the audience and Lefty used this guitar constantly for live shows, television appearances and recordings during the busiest part of his career. Frizzell was nearly always photographed in this period with this custom Bigsby/SJ-200 and it can be seen on album covers, in live and publicity photos and in surviving television footage. This special guitar was a signature visual statement as unique as Lefty's singing.

In the late 1940's and early '50's number of country music greats including Merle Travis, Chet Atkins, Hank Garland, Grady Martin, Joe Maphis, Speedy West, Billy Byrd, Hank Thompson, and Tiny Moore had instruments built or modified by Paul A. Bigsby. "P.A.", as he was known, worked alone so each of his creations is handcrafted and unique, making authentic Bigsbys extremely rare. Paul Bigsby is an important figure in 20th Century guitar history, contributing heavily to the development of the electric guitar and the pedal steel. He built solid-body guitars before Leo Fender but was not interested in commercializing them to any large extent. Instead, the vibrato unit he designed for Merle Travis became widely popular as an add-on accessory in the 1950’s and was eventually adopted by Gretsch, Gibson, Guild, Harmony, Magnatone and Kay as standard equipment on their guitars. It is still familiar and widely used today.

Bigsby was a patternmaker with a specialty in motorcycle construction but through his friendship with Travis and steel player Joaquin Murphy became involved with guitars. Around 1947 Travis conceived a solid electric guitar and jokingly asked his cycle-building friend if he could make it. “I can build anything” replied Bigsby, and within a short time had made from scratch the instrument Merle sketched out on scrap paper. Travis’ use of the guitar soon had other country musicians ordering custom instruments from Bigsby, who soon also began fitting his pickups to instruments built by others. Bigsby built only electric instruments but would add custom necks and decoration to acoustic guitars. His customers were overwhelmingly Country & Western artists and a Bigsby instrument was a mark of distinction, a Cowboy Cadillac among musicians.

Lefty's SJ-200 is a particularly fine example of Bigsby's custom work, with some unique features. The sleek Bigsby-made neck is crafted from laminated maple and walnut. Instead of the usual Bigsby fingerboard it carries the original Gibson rosewood board with pearl crown pattern inlay, with a Gibson truss rod underneath. The distinctive single-sided headstock (the same as on the Travis guitar and generally considered the inspiration for Fender's Stratocaster) is inlaid with the Gibson pearl logo on a black wood background (almost certainly removed from the Gibson headstock) and an ivoroid script BIGSBY inlay. It is most unusual to see the two names side by side…nearly all Bigsby-modified instruments carry just his logo. One wonders if Lefty insisted on keeping the "Gibson" markings on his expensive guitar. The tuners are 1950's nickel Kluson Deluxe, but retaining the original gold-plated ferrules. The high E-string tuner is an earlier style open-back Kluson. The Gibson rosewood “moustache” bridge is fitted with the typical aluminum Bigsby saddle, as seen on his vibrato units. The maple back and sides retain their original sunburst finish, but the spruce top was refinished to natural by Bigsby when the upper pickguard was installed. The strap attachments are curved aluminum brackets, another Bigsby trademark.

Overall length is 43 in. (109.2 cm.), 17 in. (43.2 cm.) wide at lower bout, and 4 15/16 in. (12.5 cm.) in depth at side, taken at the end block. Scale length is 25 1/2 in. (648 mm.). Width of nut is 1 5/8 in. (41 mm.). The Lefty Frizzell SJ-200 shows signs of extensive use but is still a fine playing and sounding instrument; considering the guitar’s history it is surprisingly well preserved. There is considerable pick wear to the top, a very well repaired crack to the back and a grain split on the top next to the fingerboard on the treble side. The action has been adjusted over the years; an old popsicle stick or tongue depressor is currently fitted under the Bigsby saddle (this is visible in 1960's photos) and the guitar plays quite comfortably. One piece of pearl is missing from the moustache bridge.

The instrument has not been altered since Lefty’s death except for a change of strings. Several areas still bear the remains of the chewing gum he would stick to the instrument while singing. This guitar is as perfect an example of Honky-Tonk Americana as is possible to imagine.

With its striking look and bold signature pickguard, this particular guitar is one of the most recognizable instruments in country music history. For many years it had been on loan to and displayed at the Country Music Hall of Fame. In January 2005 it was returned to the Frizzell family. While it may not sing with Lefty's distinctive voice, it is rich with the imprint of his character – down to the belt buckle wear and pick scratches. Countless gigs were played on it, and the guitar traveled many thousands of miles through the heartland of America over the course of Lefty's career. This instrument is a unique piece of Americana – it is, to borrow the title of Lefty’s classic 1950’s album, “The One and Only”.

Please note: This instrument has been sold.
Video Links

Lefty Frizzell - I Love You A Thousand Ways