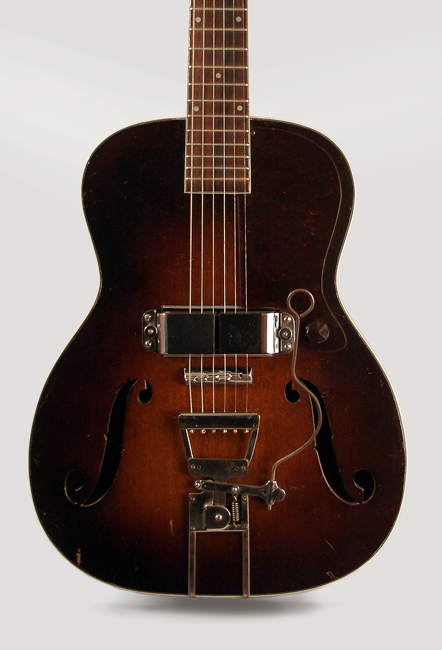 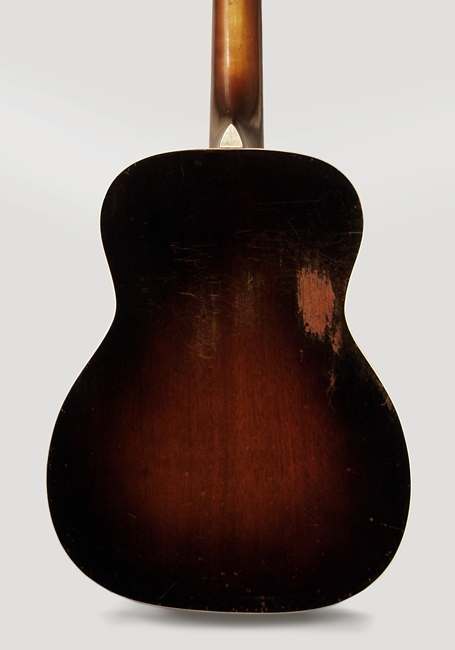 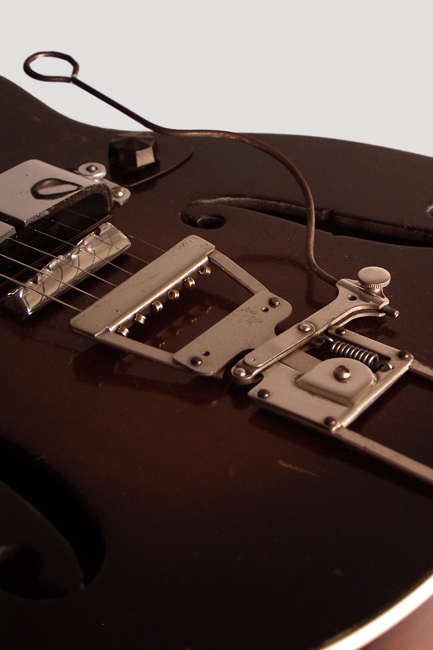 Rickenbacker were the undisputed pioneers in the commercialization of the electric guitar, and the early Ken Roberts electric Spanish model is one of the most important, if relatively unknown, of their early creations. While the great bulk of Rickenbacker's (and indeed everybody's) early electric business was in lap steel guitars, the company experimented with regular Spanish guitars right from the beginning. These were built in far smaller numbers than the steels, and were far less successful commercially but perhaps even more important in the long-term to modern guitar history. Rickenbacker's designer George Beauchamp created the first truly successful electric guitar pickup using large horseshoe-shaped magnets and a central coil, and the instruments fitted with this unit were absolutely the best and most practical of their day.

The first production Rickenbacker instruments were issued in 1933, under the brand name "Electro". The initial line consisted of a Hawaiian guitar made entirely of aluminum with a tiny circular body at the end of a long neck (often referred to as the "Frying Pan") and a wood-body Spanish instrument built on a flat-topped body sub-contracted from the Harmony company. This electro-branded Spanish-style instrument is so rare only a few are known to have been sold in 1933-4. In 1935 the company's line was expanded with a new series of futuristic instruments made of molded Bakelite (including Hawaiian and Spanish guitars and a violin) and this unusual wood-bodied guitar, named for a Hollywood studio guitarist who was a friend of Beauchamp's and made some suggestions as to its design. The wooden body and neck were still sourced from Harmony (Rickenbacker's factory lacked the facility to produce conventional fretted instruments) but the design was specific to this instrument only.

This original Ken Roberts model is one of the earliest examples of the model and a historically interesting instrument for many reasons. Several of its design elements are unique and it is also the first electric instrument named for an endorser, although admittedly an obscure one. The most striking feature is the extended neck; while many period arch-top guitars had 14-fret neck joints the Ken Roberts fingerboard joins the body at the 17th fret allowing much greater access to the higher frets. This feature was way ahead of its time, specifically designed for the electric guitar and anticipates further developments of the 1950's. The headstock is solid, replacing the older-style slotted head used on the first Electro Spanish models.

Another revolutionary feature is the stock Kauffman Vib-rola tailpiece; the Ken Roberts is not only the first electric guitar to feature a hand-operated vibrato as standard equipment, but the very first instrument of any type to do so (presaging generations of Stratocasters and Bigsbys). It also marks Rickenbacker's first link to the unit's originator, Clayton "Doc' Kauffman, who would become a major design collaborator for the company a couple of years later. The tailpiece on this particular guitar is the earlier style assembled by Kauffman himself, made prior to the Rickenbacker operation taking the unit's manufacture in-house in 1936-7.

Along with its signature horseshoe pickup at the bridge position, the Ken Roberts Model has other unusual aspects. The "F" soundholes are on the instrument's flat-topped lower bout with a single volume knob near the waist-the opposite arrangement of most guitars. The pickguard is flush with the face and the bridge is a unique cast metal piece, adjustable for height with a compensating ridge, all anticipating similar Gibson designs by many years. The instrument is in many ways the first modern Electric Spanish guitar, featuring both extended fingerboard access and a functional vibrato-features literally years ahead of their time. Compared to Rickenbacker's small-bodied 1935 Bakelite Model B Spanish, the Ken Roberts is both more conventional and more functional, with a standard wooden neck (instead of molded plastic) fretted in the conventional manner and a body that sits comfortably on the lap without being excessively heavy.

Although mostly forgotten by history, the Ken Roberts represents a fascinating and important step in the evolution of the modern electric guitar.

Overall length is 40 3/4 in. (103.5 cm.), 14 1/4 in. (36.2 cm.) wide at lower bout, and 4 in. (10.2 cm.) in depth at side, taken at the end block. Scale length is 25 in. (635 mm.). Width of nut is 1 3/4 in. (44 mm.). Very clean overall, some light wear but intact with all original finish and hardware complete except the small stamped metal cover on the Vib-Rola mechanism is gone. The often-missing thin wire Vib-Rola handle itself is intact and the rather fragile unit is still functional. The guitar is playable in its current state but a neckset would bring the guitar to a fully functional level of playability to modern tastes. Included the extremely rare original HSC. Excellent - Condition.
×