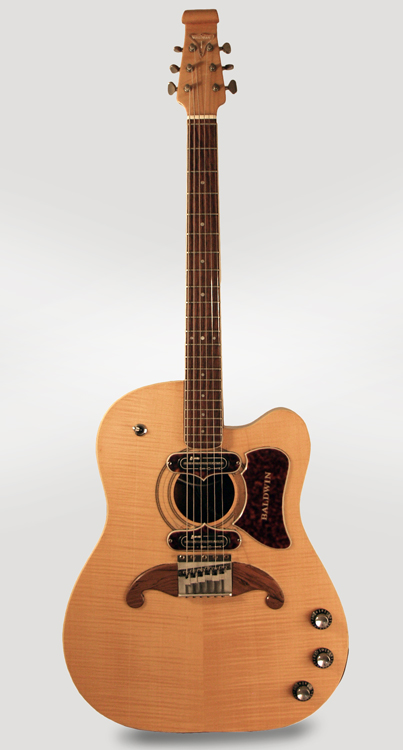 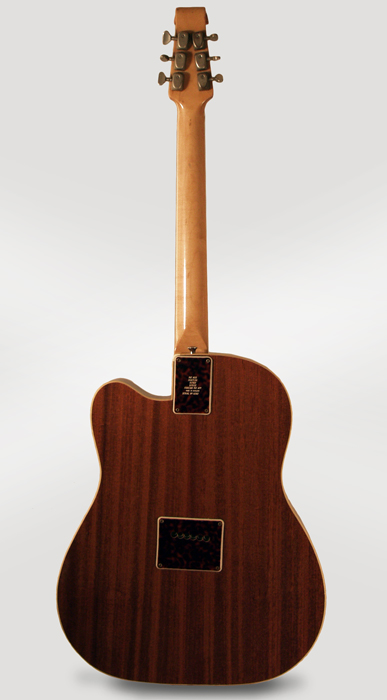 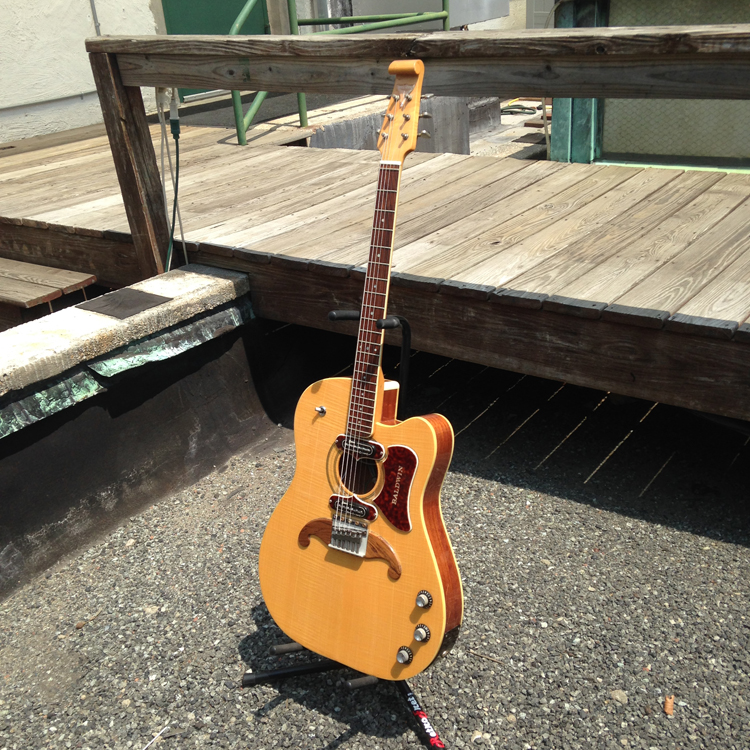 The Virginian is one of the scarcer Burns guitars, and one of the most distinctive-in both looks and sound-of this eccentric but always interesting line. Introduced at the beginning of 1965, this one of Jim Burns' final designs for the company that bore his name until September that year, when Baldwin took over the operation. The model was in production until the late '60's, but many of the features were changed in mid-1966 when Baldwin 'standardized' the line and early Burns-style examples like this one are quite rare. This Virginian, although bearing the "Baldwin" logo on the pickguard, is a transitional guitar identical to the original Burns version except for its bound fingerboard.

While appearing initially to be an amplified (and possible horrible mutilated) flat top round-hole acoustic, the Virginian is really a fully electric semi-hollow guitar with a laminated mahogany body and flamed sycamore top. The two "Bar-O-Matik" pickups are mated to the patented fully adjustable floating spring-tensioned "Rezo-Tube" bridge, used without a vibrato only on this model. The "full-scroll" headstock neck is shared with the Marvin guitar, although the Virginian has a slightly shorter scale. The unusual three-knob "density' tone circuit was one of Jim Burns' latest creations at the time, consisting of a stacked "Bar-O-Matik" neck pickup with a blendable second coil combined with a single-coil at the bridge. The heavily braced cutaway mahogany body was called the "Controlled Resonance" design, developed from the slightly earlier "GB65" but here with a larger center block to accommodate the Rezo-Tube unit.

Jim Burns himself was extremely proud of this instrument, which was completely unlike most guitars in existence in 1965. He later re-engineered the concept into the more solid-bodied "Steer" which due to its continued use by Billy Bragg remains the most popular later Burns design. Despite its hybrid and somewhat whimsically eccentric appearance the guitar handles very well and the sound is extremely bright and clear for a full-size hollow instrument. Baldwin had some slight success marketing the Virginian through their Nashville operation (which was tied in with Sho-Bud) but the Virginian remains a singular creation that inspires a reaction-at least a raised eyebrow-from just about every player that sees it!

Overall length is 42 in. (106.7 cm.), 16 1/2 in. (41.9 cm.) wide at lower bout, and 2 5/8 in. (6.7 cm.) in depth, measured at side of rim. Scale length is 24 1/2 in. (622 mm.). Width of nut is 1 11/16 in. (43 mm.). This is a nice playing example of this fairly rare Burns creation; it remains all original except for a neatly added tortoise plastic jackplate to the side where a couple of jack repairs have been performed over the years. This guitar is fairly clean overall with less of the heavy finish checking common on the typical period Baldwin/Burns instrument. There is one noticeable area of finish loss to the soundhole area of the top between the pickups, where some of the clear poly and soundhole ring decal has flaked away. There are some small scrapes and dings but overall not too much finish wear. This is a good player and an admittedly very unusual looking but surprisingly functional guitar. Overall Very Good + Condition.
×